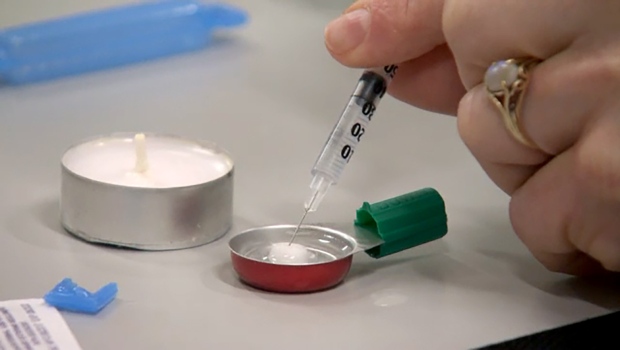 CALGARY — A grassroots movement aimed at curbing overdose deaths in Lethbridge, Alta. is asking for volunteers to help but warns of significant “backlash from the community.”

The organization, called the Lethbridge Overdose Prevention Society (LOPS), is headed by Tim Slaney, a former worker with the city’s ARCHES non-profit agency.

In a Facebook post, it asked for volunteers to help out with the site that’s scheduled to be set up in Galt Gardens at about 8 p.m.

Those interested in helping out are told to wear orange and be prepared for negativity.

“Supporters are needed to show solidarity in this movement, as backlash from the community may be expected,” the post reads.

It’s expected to operate in the Lethbridge park, widely considered by many to be an ‘epicentre’ of the opioid crisis, until 11 p.m.

Slaney told CTV News in an interview that the idea for the pop-up supervised consumption site (SCS) came from a desire of many former harm-reduction workers to help out.

ARCHES shut down to the public on Aug. 31 amid a report that it had misappropriated $1.6 million in provincial funds that were discovered during an audit.

When the Alberta government learned of the missing funds, it cut all further money to the facility and forced it to close.

Lethbridge opened a mobile overdose prevention site to replace it, but Slaney says it was only 10 per cent the site of ARCHES and residents need more help.

“We saw first-hand the epidemic of opioid use and COVID-19,” he said. “It was very clear this was not going to work. We decided that we had no choice but to start something ourselves.”

Slaney admits that there has been controversy surrounding the SCS and expects there to be people who are not happy that it’s taking place.

“(It’s) a fair bit of racial animosity,” he says. “An unusually aggressive backlash. There has been an organized effort to disrupt us.”

Slaney says he’s reached out to, Mayor Chris Spearman, city council and the Lethbridge Police Service in regard to the pop-up SCS but he isn’t worried about anyone being arrested at Saturday’s event. Similar events in other communities have gone well, from what he’s heard.

“There is no real history of people being arrested for this.”

A letter published in late August, signed by more than 40 organizations that work to support those with addictions, called ARCHES’ closure “nonsensical.”

“This will evidently translate in deaths and more tragedies in the community,” said Cecile Kazatchkine, senior policy analyst with the Canadian HIV/AIDS Legal Network, at the time.

“The impact we’ll see is that people who use drugs, and are accessing these life-saving services, won’t have access to them anymore.”

Slaney says he plans to keep the number of volunteers at Saturday’s event small, but aims to do a lot of good.

“We hope to help as many people as we can.”

LOPS is scheduled to meet with Lethbridge city council to discuss the pop-up SCS concept on Wednesday.