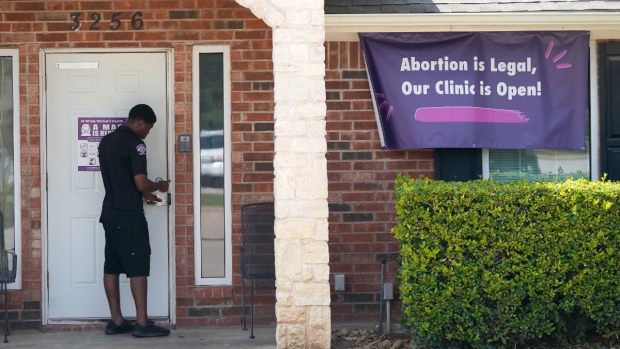 DALLAS — A judge has temporarily shielded some Texas abortion clinics from being sued by the state’s largest anti-abortion group under a new law banning most abortions.

The temporary restraining order was issued Friday by District Judge Maya Guerra Gamble in Austin in response to a Planned Parenthood request. Although the law remains in effect, the judge’s order shields Planned Parenthood’s clinics, specifically, from whistleblower lawsuits by the nonprofit group Texas Right to Life, its legislative director and people working in concert with the group.

The law, which took effect Wednesday, prohibits abortions once medical professionals can detect cardiac activity, which is usually around the sixth week of pregnancy and before some women realize they’re pregnant. The law also leaves enforcement to private citizens through lawsuits instead of to prosecutors through criminal charges.

If Planned Parenthood is ultimately successful in the case, it could become a model for other abortion providers to bring similar “injunction-type cases” against those who would be likely to sue them over alleged violations of the law, said David Coale, a Dallas appellate attorney who isn’t involved in the litigation but has been watching it unfold.

Planned Parenthood said in a statement Friday that the law was “already decimating abortion access in the state, as providers are forced to turn people away” once medical professionals can detect cardiac activity. It said historically, 85% to 90% of women who have gotten abortions in Texas were at least six weeks into their pregnancies.

In its petition filed late Thursday, Planned Parenthood said that even if it prevails in every case filed against the group alleging violations of the law, the lawsuits would still accomplish the law’s goal to “harass abortion providers and others critical to a patient’s support network.” The group also said fighting the lawsuits could bankrupt those who are sued, since under the law they can’t recover attorney fees and costs if they win.

Texas Right to Life Vice President Elizabeth Graham said in a statement that her group expects Planned Parenthood’s lawsuit to be dismissed and that, “until then, we will continue our diligent efforts to ensure the abortion industry fully follows” the new law.

The law, which is the nation’s most far-reaching curb on abortions since they were legalized a half-century ago, took effect Wednesday. The Supreme Court then allowed it to remain in force by voting 5-4 to deny an emergency appeal from abortion providers.

Coale said the case in which the judge granted the temporary restraining order on Friday centers on the issue of “irreparable injury” — whether abortion providers would be overwhelmed by the costs of defending themselves from a potential flood of lawsuits before higher courts could weigh in on the legality of the statute.

Texas Right to Life has created a website to receive public tips about violations, though the site was down Saturday morning after its host, GoDaddy, said it violated the company’s terms of service, including a provision against collecting identifying information about someone without their consent. A spokeswoman for Texas Right to Life said Friday that the group was moving its site to another provider and expected it to be running again within two days.

The site, which has inspired activists on social media to encourage people to flood it with misinformation, had not as of Friday received any credible tips about alleged violations, said Texas Right to Life’s senior legislative associate, Rebecca Parma.

She said abortion providers appeared to be “complying with the law, and that’s the whole point of the law in the first place.”