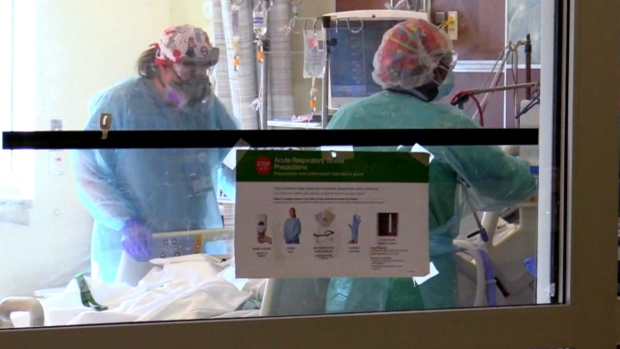 TORONTO — Many nurses report having left the front lines after the stress of COVID-19 made their jobs more difficult and less safe, creating a shortage of health-care workers in certain regions and even forcing rural areas to temporarily close hospital units.

RN’s across Canada have taken to social media to sound the alarm over poor working conditions and aggressive, sometimes violent, patients brought on by the pandemic.

Johanna, who has asked not to be identified, is an ICU nurse who tended to coronavirus patients in critical care. She told CTV News she recently quit that position due to burnout, saying she was unable to withstand the long shifts in an understaffed critical care unit any longer.

“And so, the passion for nursing for me, is completely gone,” Johanna said through tears.

Johanna said she would sometimes be caring for up to four critically ill patients at a time, some on ventilators, while her partner was on break due to a lack of staff.

“That is completely insane,” she said. “If you make a mistake that person doesn’t live.”

While there aren’t yet firm numbers, there are reports that the pandemic has increased burnout among highly-trained nurses, causing them to leave the profession at an alarming rate.Some are retiring early.

Debra Lefebvre, a nurse, mental health practitioner and member of the board of directors with the Registered Nurse Association, estimates that close to two-thirds of nurse professionals in Ontario alone are looking to change careers right now. She says this is largely because of unsafe staff ratios, working conditions, poor mental health and patient violence experienced during the pandemic.

“They couldn’t take it anymore,” she said.

Johanna says being a nurse is no longer a “normal job,” and that the expectations they have to meet are “unrealistic.”

She explained that she used to come home from work feeling proud of what she had achieved. Now, she says that pride is gone.

“I come home now and think, ‘What can I do differently? What other job could I get into?’ I don’t think I can keep this up. Nor do I want my children thinking that this is normal,” Johanna said.

What made things harder, Johanna said, was the expectations put on nurses by the community to be “heroes” during the pandemic, making her feel like she couldn’t talk about how exhausted she really was.

“It’s hard because we aren’t allowed to talk about it. [If] you talk about it, you feel like you’re not that hero that people think that you’re supposed to be,” Johanna said.

THE COST OF BURNOUT

Those who remain in the field say they have often take extra shifts to help those on duty. However, registered nurse Anita says nurses who do that pay a price.

“I hate to admit it, but in the last year and a half, I have done more med errors than I have in my whole career, and I attribute that to… [the] times where I worked 120 hours in two weeks,” Anita told CTV News.

She added that there has also been an increase in verbal, sometimes physical, abuse from patients and their families over the past year.

Anita said patients’ families have accused her of putting up “roadblocks” to see their loved ones with hospitals on lockdown, and have argued with her about conspiracy theories on COVID-19.

“People’s opinions on vaccination will come through and say, ‘It’s a hoax,’ and, ‘It’s the government trying to control them,’ when in actual fact we’re just trying to look after their loved ones,” Anita said.

Also frustrating nurses are protests outside hospitals of those who oppose face masks and vaccines. Anita says this is an affront to those working to save lives.

Even young nurses, including Toronto-based trauma RN Eram Chhogala, say they are tired and burnt out from their jobs. She told CTV News recruiting more nurses won’t solve the problem because new recruits are leaving the profession too.

“It is worrisome because [I] have individuals or colleagues of mine who are young individuals, who have just entered into the profession and all of a sudden, in a few months they just suddenly up and leave,” Chhogala said.

She explained that this is a cause for concern as staffing shortages grow more dire.

“You won’t have enough nursing staff to attend to your needs and the needs and care for yourself and your family or your friends,” Chhogala said.

Health advocates say keeping the skilled nurses with better staffing and more mental health supports could help address the problem, as well as putting an end to wage cuts and caps in the profession with campaigns underway in Ontario and Alberta against efforts to limit wage increases in the public sector.

The Canadian Association of Emergency Physicians (CAPE) also issued a warning this week in support of nurses.

“We are alarmed at the exodus of our colleagues. Morale and staffing are at all-time lows. When departments are unable to adequately staff, it creates a domino effect of reduced access to care, increased burden on the remaining nurses on shift, increased infection risk and decreased patient safety,” read the statement from CAPE.

In addition to system improvement, nurses say the public can do its part to ease the strain on hospitals by getting vaccinated.

If Canadians don’t and refuse to continue following virus restrictions, Chhogala said it is likely that hospitals across the country will again be overwhelmed with COVID-19 cases without enough staff to tend to them.

“If we start hitting high numbers again, it’s going to be a serious problem and it’s not only at one local hospital, it’s all hospitals,” Chhogala said.

“I don’t want to scare anybody, it’s just the reality now. The nurses are tired.”