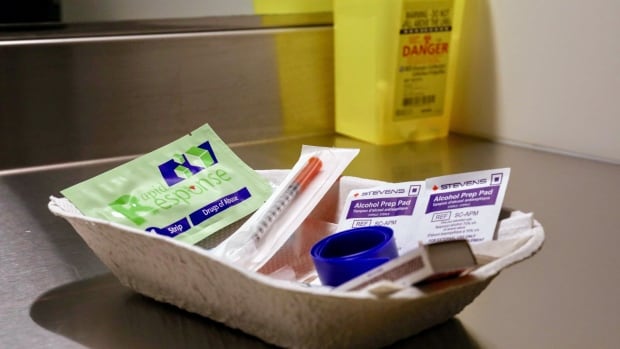 A government appointed panel has turned in its review of Alberta’s supervised consumption sites to the province, and advocates are anxiously awaiting a decision on the future of the program.

That review is now being assessed by the government and funding will remain in place until a decision is made but there is no deadline set for that decision, a spokesperson for Associate Minister of Addiction and Mental Health Jason Luan confirmed.

Stacey Carmichael is with Red Deer’s Turning Point, a temporary harm reduction site run out of a trailer. She said the organization has been running at capacity — and a larger, permanent facility sits empty while they wait for a decision.

“For us it’s particularly tricky because we’re being, I guess, measured on a temporary solution and we’ve never had the opportunity to implement the full complement of services that we know that we need and the capacity is not meeting the demand in the community,” she said.

“So we’re leaving a lot of people underserved and that’s unfortunate.”

Red Deer’s site is currently seeing upward of 165 visits each day and December was the busiest month yet, with 5,076 visits.

Two other planned sites, one in Medicine Hat and a mobile unit in Calgary, are also on hold.

Celeste Hayward, with the Alberta Community Council on HIV (ACCH), said the uncertainty could see some sites shut down and she fears disrupting stability for clients could impede their recovery.

“There’s a lot of unknowns which make it likely that the safest way forward is to actually close their doors … while they wait for budgets to be confirmed which means no services, which means risk of life.”

Hayward said it’s important to remember that consumption sites don’t just offer a supervised, clean location to consume illegal substances, but also wraparound services like emergency medical care, education on the harms of drug use, and referrals to other social services.

Luan has been criticized for some of his comments about addiction, from saying distributing naloxone kits may enable drug use to deleting a tweet pondering if research supporting supervised consumption sites is funded by big pharma.

“I’m hopeful that the evidence and the research will maybe trump ideology and we can just proceed.”

The review looked at social and economic impacts of the sites but did not consider health benefits or social issues around drug use, or its efficacy in curbing addiction.

The associate minister said at the time the review was announced that the scope was chosen because the evidence is already well established the facilities play a role in harm reduction but the Opposition argued that scope left out a crucial aspect of the review.

A report published by ACCH last year found Alberta’s supervised consumption sites have a 100 per cent success rate at reversing overdoses, and that there’s been a decline in opioid-related deaths, overdoses in emergency rooms and EMS responses, all attributable to the harm-reduction strategies.

The report also found savings of $5 for every dollar spent on the sites.