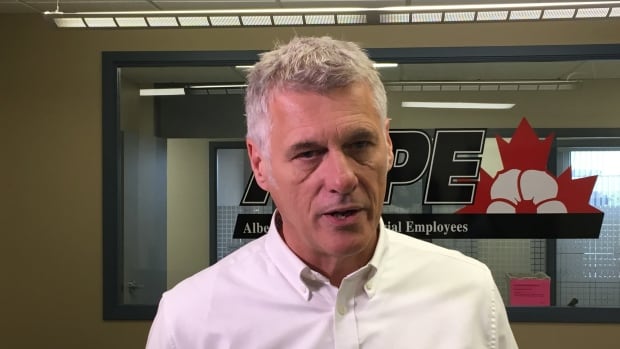 Frontline support staff walked off the job at three Alberta hospitals Monday in a bid to halt job cuts proposed by the provincial government, says the Alberta Union of Provincial Employees.

About 175 workers at the Royal Alexandra Hospital in central Edmonton refused to go into work Monday, AUPE president Guy Smith, said in an interview with CBC News.

Some workers have also walked off the job at the Foothills Medical Centre in Calgary and the South Health Campus in Calgary. Smith said the union does not yet know how many workers in Calgary have joined the picket line.

“They really are the unsung heroes and the disrespected heroes of this government who keep the hospital safe and clean and operating,” Smith said.

Smith said the walkout was not authorized by the union but the AUPE supports its members’ right to strike.

“From what I understand, it was the shift that was due to start at 7 o’clock, they refused to go in,” Smith said.

“We believe workers have the right to strike at any time to defend their jobs and defend the services to the people of the province. Alberta Health Services may view it differently but we’ll deal with that when it comes.”

The union, which represents more than 60,000 AHS employees including licensed practical nurses, health-care aides, and housekeeping and kitchen staff, is accusing the UCP government of proposing “reckless and dangerous” changes to the health-care system.

“These workers are on strike to protect their jobs, stop the privatization of health care and deal with workload issues in the health-care system at the moment,” Smith said.

“It comes after over a year of frustration and anger at the government which has been exacerbated by the pandemic.

“And the frustration levels of the members are at the point where they decided to walk off the job at at least three sites that we know of at the moment.”

Smith said that since the strike action is led by members, not the union, the workers will decide how long the strike continues.

The wildcat strike comes amid the threat of massive cuts in health care, detailed by Alberta Health Minister Tyler Shandro at a news conference earlier this month.

Between 9,700 and 11,000 AHS employees will be laid off, most of whom work in laboratory, linen, cleaning and in-patient food services.

The jobs will be outsourced to private companies. Shandro said the changes will save up to $600 million annually once they are fully implemented.

Unions representing Alberta’s health-care workers have said there will be major labour strife if the government follows through on the proposed restructuring plan.

The relationship between the UCP government and doctors and health-care unions is already severely strained following a series of legislative initiatives.

In late 2019, the government passed legislation that gave it the power to unilaterally terminate its contract with the province’s doctors.

The government also passed Bill 32, which placed restrictions on where unions could picket, and how they could use union dues for political purposes. That legislation is being legally challenged by the AUPE, which maintains it is unconstitutional.

On Monday, the Health Sciences Association of Alberta (HSAA) voiced its support for the wildcat strike. The HSAA represents 27,000 health-care workers across the province.

President Mike Parker said HSAA members will not do the work of those on strike.

“Health-care workers have been working tirelessly to keep Albertans safe and they have been rewarded with threats to their jobs by a government that is hell-bent on ripping apart our public healthcare system,” Parker said in a statement.

“The blame for any disruption to patient care that may occur today needs to land squarely at the feet of Jason Kenney and the UCP.”