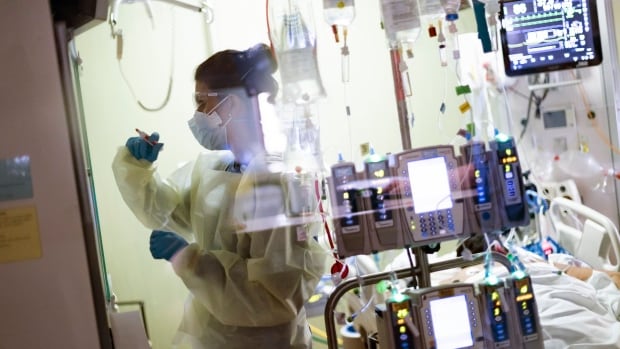 As provincial hospitals continue to struggle to meet surging COVID-19 patient demand, they have still not reached the threshold needed to activate the Alberta Critical Care Triage Framework which guides physicians through extremely tough decisions when demand for life-saving treatment outstrips available resources.

But that harsh new reality is already facing some U.S. hospitals, where the pandemic is forcing doctors to prioritize patient care.

Earlier this month Alaska’s largest hospital, Providence Alaska Medical Centre in Anchorage, activated its Crisis Standards of Care protocol, which gives the hospital the authority to, among other things, decide who will be given life-saving treatments when there isn’t enough equipment or staff for everyone who needs it.

“Most physicians, unless they have worked in a third world country or something, may never have experienced that before in their careers,” said Dr. Michael Bernstein, chief medical officer for the Providence Alaska Medical Care Centre.

“I have never been in that situation previously,” added Bernstein, who says he has worked in ICUs for more than 30 years.

In a letter to Alaskans last week, the chief of staff at Providence, Dr. Solana Walkinshaw, said: “What does this mean? In short, we are faced with a situation in which we must prioritize scarce resources and treatments to those patients who have the potential to benefit the most.”

During a zoom call with reporters this week, Walkinshaw said since the protocols were activated on Sept. 11, the triage team, which includes an ethicist, has been consulted a few times.

Walkinshaw says in one case, they had four patients with kidney failure, some a result of a COVID-19 infection, but only two continuous dialysis machines — and limited staff to run them.

As a result, Walkinshaw says, one of the patients died and the other had to wait for care.

Meanwhile, a hospital in Helena, Mont., was also forced to implement crisis standards of care amid a surge in COVID-19 patients.

The state of Idaho activated similar protocols earlier this month as well. State officials made the decision after first allowing healthcare rationing at hospitals in northern parts of the state.

But despite Idaho’s dire situation, a spokeswoman for the Idaho Hospitals Association says, so far, none of the facilities have yet had to implement triage protocols.

“We were very, very close to having one hospital have to pull their triage team together — maybe within one patient, if one patient had not been moved that  hospital was at its peak.”

Alberta Health Services (AHS) says its critical care triage protocol will only be implemented if all other efforts at creating additional capacity have been exhausted.

The 52-page document describes how the health-care system will cope if intensive care units (ICUs) no longer have the resources to care for every critically ill patient.

It says the first phase would be deployed if 90 per cent or more of Alberta’s critical-care surge beds are in use — during what is described as a major surge.

There are currently 302 patients in ICU, the vast majority of whom are being treated for COVID-19. This is the highest number of ICU patients since the pandemic began.

Bernstein says such difficult decisions are usually not left to attending clinicians. Rather, they are made by the triage committee so as to help alleviate the burden on front-line staff.

“It’s a group of his peers or someone else to advise to take the weight of that decision off of them so they are not owning it entirely themselves,” said Bernstein.

“At least they’ll have a team to do it, so an individual won’t carry the moral weight of saying ‘we had only one bed and we gave it to the 32-year-old and we had to tell the 85-year-old’s family members that that person was being discharged to long-term care,” said Guichon.

Walkinshaw says health-care workers know that death can be a stark reality when treating severely ill patients — but she says working under this scenario is so much more disheartening.

“ER doctors and ICU doctors and nurses and respiratory therapists are around people who have incredibly severe illnesses all the time. I think we’re experiencing this differently because we’re having to make these decisions about the rationing of care,” said Walkinshaw.