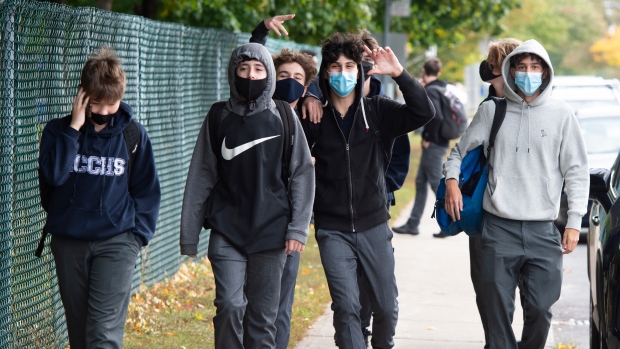 Pandemic-fuelled frustration has some teens expressing anger in unhealthy ways after a year of missed social connections that would typically help them mature and regulate their emotions, says a psychiatrist calling for more education on coping skills as part of the school curriculum.

Dr. Shimi Kaur Kang said that while anger is a normal reaction to chronic stress for everyone, she is troubled by some teens expressing their frustration through addiction to pornography and gaming as well as increased use of alcohol and drugs.

Some teens are also lashing out more at parents, or engaging in cyberbullying as pandemic restrictions prevent them from going out with friends and establishing new relationships, Kang said from Vancouver where she has her own practice and is also a clinical associate professor at the University of British Columbia’s psychiatry department.

“Psychologically, they’re meant to differentiate some of their identity from their home, the nest, and explore,” she said of teens who are craving independence as part of their normal development apart from parents.

Teens are biologically driven to connect with peers, take risks and seek novelty as the part of their brain that helps with planning, impulse control and emotional regulation is developing while they seek more autonomy. But over the past year, teens in many parts of the country haven’t gone much beyond their house.

More online learning at home without a teacher is boring for some students who find it challenging to sit for hours while they lack social contact with peers, Kang added.

Online learning away from the structured school environment is particularly difficult for students who need more stimulation, Kang noted.

“If you’re someone with a learning issue, like my son, who has (attention-deficit hyperactivity disorder), and my daughter, who has dyslexia, that’s 25 per cent of teens. That’s additional stress.”

“So they’re going online and they’re taking stupid risks. And I see kids who are posting things they never would have posted otherwise. It’s impacting their scholarships, their reputations, all kinds of stuff.”

The isolation, uncertainty and frustration are sometimes leading to angry outbursts that can get out of control, she said.

“I have cases of parents who tried to limit screen time or shut the Xbox off and the kid trashed their bedroom, got violent with their parents, ran away from home because they’re addicted to technology. They don’t want the limits of their house and they turn to alcohol and drugs to kind of deal with their emotions.”

So-called social emotional learning, which highlights the importance of mental health and resilience in the face of challenges through mindfulness, for example, is already part of the curriculum in many jurisdictions across Canada but such programs often take a back seat to academics, Kang said.

“I’m hoping the pandemic will push this through further and faster because we have been going way too slow,” she said, adding a more formal approach is needed to train teachers on ways to impart self-care and social-emotional tips to students and create lifelong healthy habits.

“We need to really focus on child and youth well-being. But we need to get more serious about giving teachers the skills that they need so they can translate information to the young people, and also take care of themselves.”

While some children seem to be adjusting to online learning, parents say the lack of extracurricular activities at school and in the community is having a negative impact.

Rod Roodenburg of Vancouver said his 16-year-old daughter Rowan can no longer participate in soccer or badminton and seeing her school friends wearing masks isn’t ideal for reading social cues.

“It’s definitely hamstringing learning opportunities, and I think social opportunities as well,” Roodenburg said, adding Rowan is already wondering if she’ll be attending a normal graduation ceremony next year and partying with her friends to celebrate that milestone.

A hybrid of online and school learning will soon include classes that are three hours long at her school, he said.

Roodenburg, who is chair of the parent advisory council at his daughter’s school, said parents regularly speak with him about various issues their children are dealing with during the pandemic, including more conflict in the home.

“I get emails, I get phone calls and I get stopped just in the street and talk to parents about all the issues they’re having. I know that there’s been a lot of struggle, and a lot of difficulty for a lot of students.”

In February, property damage at the east-side school known for its theatre and film program included broken windows, and that was concerning for many parents, he said.

Joanna Henderson, a psychologist and senior scientist at the Centre for Addiction and Mental Health in Toronto, said it’s important for teens to establish a predictable routine for sleeping, eating and exercise. They also need a supportive adult or mentor relationship, preferably with someone outside the home during the pandemic.

However, she said that may be a challenge for teens whose relationships with other family members or regular contacts such as coaches and teachers have been disrupted due to public health orders.

“That sense of ‘What’s the point of getting out of bed today or tomorrow or the next day?’ is so profound in our current context,” said Henderson, who is executive director of Youth Wellness Hubs Ontario, which has been providing virtual mental health and addiction services at 10 locations in the province.

Many of the programs were designed with the involvement of youth and that should be a guiding principle of any initiatives that aim to address their needs coming out of the pandemic, including whether schools should continue providing some form of online learning for students who suffer from anxiety and have fared OK at home, she said.

Overall, it’s important for parents to model self care and coping skills that would include taking a breath before reacting to intense emotions during an overwhelming time for their children, Henderson said.

“That, of course, depends partly on knowing your child. There’s lots of time for consequences about destroying things and slamming doors and using (inappropriate) language. But in the moment it’s not the right time. You can process, you can talk about that the next day.”

This report by The Canadian Press was first published April 10, 2021.