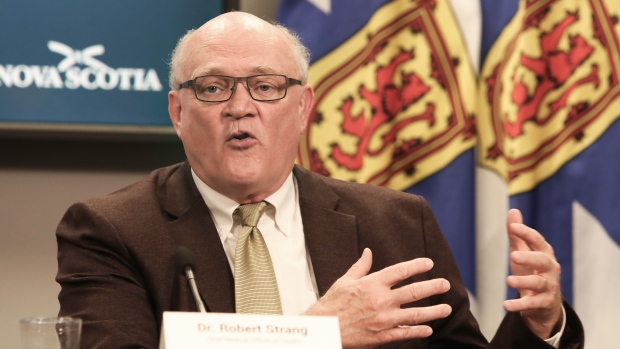 HALIFAX — Canadians living outside the Atlantic region could be forgiven for rolling their eyes when Nova Scotia called in the military this week, having reported just 96 new cases of COVID-19 on Tuesday.

That number may seem small compared to just about anywhere in the rest of the country. But it was a one-day record high for the province of 980,000 residents.

And few Nova Scotians were surprised when a strict, two-week lockdown was declared, prompting the closure of schools, malls, gyms, bars, restaurants and most retail stores.

“In the Atlantic region, we have largely gone with a COVID-Zero approach,” says Susan Kirkland, head of the department of community health and epidemiology at Dalhousie University in Halifax. “Other provinces in Canada … no longer have the luxury to do that.”

There’s no question the COVID-Zero strategy has worked for the Atlantic region, widely praised as a world leader in keeping the virus under control. Soon after the pandemic was declared in March 2020, the four provinces imposed some of the strictest lockdown rules in the country and kept them in place until late May.

As well, the region introduced the “Atlantic bubble” on July, 3, 2020. The novel policy allowed residents to travel between the four provinces but it imposed a mandatory 14-day quarantine for visitors from outside the region, a move that kept travel-related infections in check.

“The Atlantic provinces had few enough cases when they went into lockdown last year that they were able to keep close to zero transmission, like Australia, Taiwan and Singapore,” said Allison McGeer, an infectious disease physician at Mount Sinai Hospital in Toronto. “That’s something that’s worked for them, too.”

Last summer, infection rates plummeted in the four Atlantic provinces, which are home to 2.4 million people. As the lockdowns were lifted, life largely returned to normal.

“What we know is that if you act early and act hard, you can bring (infections) back under control,” said Kirkland, who is also a member of Canada’s COVID-19 Immunity Task Force. “We’re now acting very swiftly and aggressively in the hopes that we can gain control again.”

There have been sporadic outbreaks in all four provinces, including one that forced Newfoundland and Labrador to cancel in-person voting for a provincial election that was supposed to be held in February. But each province has used so-called circuit-breaker lockdowns to stop the virus from spreading.

In New Brunswick, for example, the provincial government imposed a full lockdown in the Edmundston and Madawaska areas on April 11 when those communities accounted for 15 of 19 new COVID-19 cases reported the day before. By Friday, the Edmundston Regional Hospital reported the number of COVID-19 patients had dropped to zero, and an outbreak at a local special care home was declared over.

But there’s more to Atlantic Canada’s success than its get-tough-quick approach. A research project led by Oxford University, known as the COVID-19 Government Response Tracker, has highlighted leadership as a key difference between the region and several other provinces.

“Starkly different provincial approaches may be attributed to who is at the forefront of public messaging — public health officials or partisan premiers,” says a report released in March.

Both Morrison and Henry have been “commended for gaining public trust due to their personable and straightforward communication style,” the report says.

“This approach stands in contrast to that of the provinces of Alberta, Manitoba and Ontario, where public health restrictions have generally been introduced by premiers and ministers, a strategy that has not been without confusion.”

Lavagnon Ika, a professor of project management at the University of Ottawa who specializes in international development and global studies, said the difference in strategies adopted by governments in different parts of the world is striking.

“Nova Scotia’s strategy looks like that of New Zealand or Australia, in terms of harsh restrictions and lockdowns. And it has worked,” he said.

But there are other reasons why Atlantic Canada has been successful at combating the novel coronavirus.

Unlike Ontario, Quebec, Alberta and British Columbia, the Atlantic region has not had to deal with any direct international flights since February 2020. It’s also worth noting that Nova Scotia was the last province to report its first case of COVID-19, which gave the province more time to prepare for the pandemic.

And there’s no doubt that controlling border-entry points is easier when your province is an island, or close to an island like Nova Scotia.

Atlantic Canadians also have a long-held reputation for rule-following, which helps explain why much of the population is justifiably proud of keeping COVID-19 at bay.

Halifax resident Graham Poole was among those seeking a COVID-19 test last week at the Canada Games centre in Halifax, where the Royal Canadian Navy had dispatched two dozen sailors to help handle the process.

“I think it’s a wonderful thing that they are able to assist,” Poole said after he completed his test. “People are working so hard to staff all of these testing locations …. I think it’s great that the military members are available.”

“There’s a certain element of holding our breath,” McGeer said in an interview.

“I hope for Nova Scotia’s sake that you are able to control transmission. It’s likely that you’re going to be, but many other countries have had a lot of trouble controlling transmission of (the variant first detected in the U.K.) I don’t think it’s a sure thing.”

This report by The Canadian Press was first published May 1, 2021.