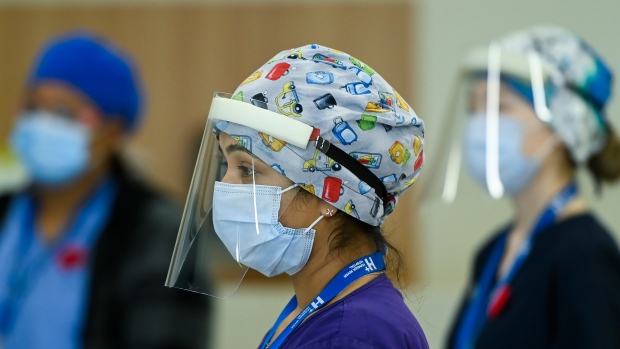 EDMONTON — Alberta’s nurses have been informed they could soon be forced to work mandatory overtime and have holiday time cancelled in response to increasing demand by COVID-19 hospitalizations and staffing shortages.

In an email sent Friday, Alberta Health Services (AHS) told the United Nurses of Alberta that emergency system demand was high across the province, especially in Edmonton and South health zones. The email said pressures in the health care system are being felt due to “increasing occupancy, acuity, and staff absences.”

“Further to our previous notifications that we would be using the emergency provisions of the collective agreements, we want to let you know that the situation has progressed and created additional pressures throughout the healthcare system,” the AHS email read.

David Harrigan, UNA director of labour relations, told CTV News Edmonton that nurses have emergency provisions in their collective agreement that the normal union rules do not apply in extreme situations.

“Basically what they (the emergency provisions) say, is that in an emergency, the normal rules do not apply,” Harrigan explained. “The employer gets to say to a nurse, ‘I know you normally work at this site but starting tomorrow you have to go over there.’”

Harrigan said that the emergency provisions were used at the start of the pandemic to move employees from sites with lower admissions to areas needing support.

He added that the nurses union and AHS were in talks earlier this week to end some of the emergency provisions and move staff back to their normal worksites.

“That seems to have changed now,” Harrigan said.

Harrigan said he does not believe the current situation meets the definition of emergency under the collective agreement.

“An emergency is an unforeseen combination of circumstances or the resulting state that calls for immediate action,” the collective agreement reads.

“A situation is not an emergency if it results from a reasonably foreseeable combination of circumstances or if reasonable remedial steps could have been or can still be taken to deal with the circumstances.”

For Harrigan, the demand hospitals are seeing now was foreseen by most health professionals in Alberta, especially as the province dropped public health restrictions and Canada entered the fourth wave of COVID-19.

“What we are saying is this (staffing situation) could’ve been avoided, it was foreseen,” Harrigan said. “We understand why AHS has to do this because there are patients in the hospitals and the system is under stress.”

The union leader said nurses are exhausted and increasingly frustrated.

“The government has been pretending for the last month that everything is fine saying, ‘Don’t worry about it, it’ll be fine. It’ll be the best summer ever,’” Harrigan said.

“It’s not the best summer ever,” he added. “The premier is on vacation but nurses are having their vacations cancelled and this was foreseeable.”

Harrigan said this situation is unprecedented and that despite the government saying staff are taking vacations, one of the top complaints the union has received from members is their inability to take time off.

“It is frustrating when the people in charge don’t admit that there is a problem,” he said.

AHS told CTV News Edmonton in a statement that it is doing all it can to avoid cancelling vacations for employees and implementing the use of mandatory overtime while ensuring safe and quality care is delivered to Alberta patients.

In a blog post on its website, the UNA said it expects to file a grievance and seek damages from AHS for the continued use of emergency provisions.