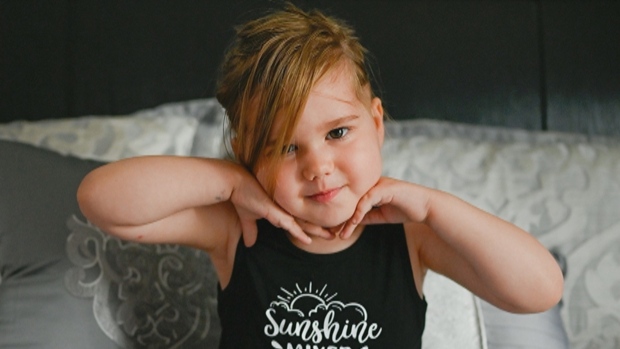 TORONTO — The parents of a 4-year-old Ontario girl diagnosed with terminal brain cancer say they are frustrated that there have been no significant developments in treatment for the rare disease in the last 50 years.

Michal and Jackie Borkowski’s daughter, Isabelle, was diagnosed with diffuse intrinsic pontine glioma or DIPG in April. There are some temporary treatments such as radiation and chemotherapy, but they have been told that there is currently no known cure.

“It’s absolutely horrific. It’s horrible to know that there really is no hope, it would require a miracle for her to survive,” Michal Borkowski said in an interview with CTV’s Your Morning.

He explained on Monday that Neil Armstrong’s daughter Karen died from DIPG in the 1960s and since then, he says, the treatments have not advanced.

“When we found out in April about our daughter we were told that we can do radiation treatment and that’s the same thing that Neil Armstrong had back in 1962, literally nothing has changed,” Michal Borkowski said.

He added that there have been some experimental trials happening In the United States, but COVID-19 travel restrictions have made it “really, really difficult” for Canadian families to cross the border and gain access.

“It’s unfortunate and it’s incredibly frustrating that nothing really has changed, and there’s virtually no funding going into researching cures for this cancer which is the most frustrating,” Michal Borkowski said.

The couple says Isabelle was a happy, healthy child but was diagnosed with DIPG when she began struggling to walk. They say doctors have told them that only 10 per cent of children diagnosed with the disease survive past age two and less than one per cent live past five years. They say the average lifespan is nine months after diagnosis.

Doctors have told the Borkowskis that the best thing they can do now is to make as many memories with Isabelle as possible.

“We are at six months now so we are taking each day at a time and really trying to celebrate every single moment with her. Every little thing she does we celebrate and we clap and we cheer, and it’s just absolutely horrific and devastating to just watch your child suffer and knowing what the future holds,” Michal Borkowski said.

Despite the grim outlook, Jackie Borkowski says they couldn’t be more proud of their daughter.

“She’s a fantastic, amazing, beautiful little girl. We are so proud of her and she’s just so kind to kids at school and in her class. She’s a jokester and a prankster… and she just has such a beautiful vivacious personality… it shines through of what an amazing little girl she is,” Jackie Borkowski said.

However, she admits that Isabelle’s condition is slowly deteriorating.

“She’s been struggling with some tiredness lately, but we do have her in [junior kindergarten] and she tries to do half days and she’ll come home in the afternoon for a nap,” Jackie Borkowski said, adding that Isabelle loves going to school and spending time with her friends.

While most parents dream about their child’s future, Jackie Borkowski said they are taking it day-by-day.

“I can’t believe how much time has gone by like how fast the time has gone but we just we try to do activities with her as much as possible,” she said.

Jackie Borkowski says they have been doing monthly birthday parties since Isabelle’s diagnosis. Isabelle just had her real birthday on Oct. 17, but the family throws her a themed party every month around that date with immediate family and a few of Isabelle’s friends.

They’ve also done various other activities such as going to the park, taking a ride in a Corvette and doing a drive-thru zoo tour.

“Just things like that to try to have fun. Of course with this birthday party this last weekend that was a big milestone, school starting in September was another one we were really hoping to get to and glad that we did,” Jackie Borkowski said.

Jackie Borkowski added that they are trying to make “every day as happy for her as possible” since they don’t know how many days Isabelle has left.

“We never know when that end is going to be. The average is nine months, we would hope that she can go beyond that hopefully defy those odds and be one of those kids that can make it up to two years, but unfortunately for us, her future is pretty bleak,” she said.