TORONTO — Toronto could see about 2,500 COVID-19 cases per day by the end of April if the current rate of transmission remains the same, the city’s top doctor said Monday.

In a presentation to Toronto’s Board of Health, Dr. Eileen de Villa said that the third wave of the pandemic is “wreaking havoc” on the city.

“All together this says that right now, what we can anticipate of this third wave, is likely going to be worse than we have seen thus far over the course of the pandemic,” the medical officer of health said.

“As I’ve mentioned already now a couple of times, this is due to increased transmission, and increased severity associated with that B.1.1.7. variant of concern, which is now the dominant strain.”

De Villa added that the projection of about 2,500 daily infections by the end of April is based on the current rate of COVID-19 transmission as well as vaccinations. If the rate of transmission remains stagnant past April, the city could see more than 6,000 daily COVID-19 cases by June.

The record for daily COVID-19 cases in Toronto was 1,642 and was logged during the pandemic’s second wave.

The city recorded 1,269 new COVID-19 cases on Monday as well as 44 new admissions to the hospital—five in intensive care. There were also five more deaths related to the disease in Toronto.

De Villa said that the city is reporting a seven-day average of 941 COVID-19 cases, a 116 per cent increase from the data presented three weeks ago.

Speaking at a news conference Monday, de Villa said that the city is currently experiencing an “explosive, exponential growth” in COVID-19 variants.

“The old COVID-19 virus is being bulldozed by the B.1.1.7 variant, with the other two primary variants present in Toronto as well,” she said.

Asked if the city is considering further public health restrictions to curb the spread of the novel coronavirus, de Villa said she supports any measure that can be made to “work reasonably on the ground.”

“Rest assured that there is lots of conversation ongoing between ourselves and other public health units in the province,” she added.

There are vaccine ‘coverage differences’ in Toronto, de Villa says

The data presented to the board of health shows areas with some of the city’s highest case activity are the areas that have some of the lowest vaccination rates.

De Villa said there were “challenges” in respect to vaccine coverage throughout the city. 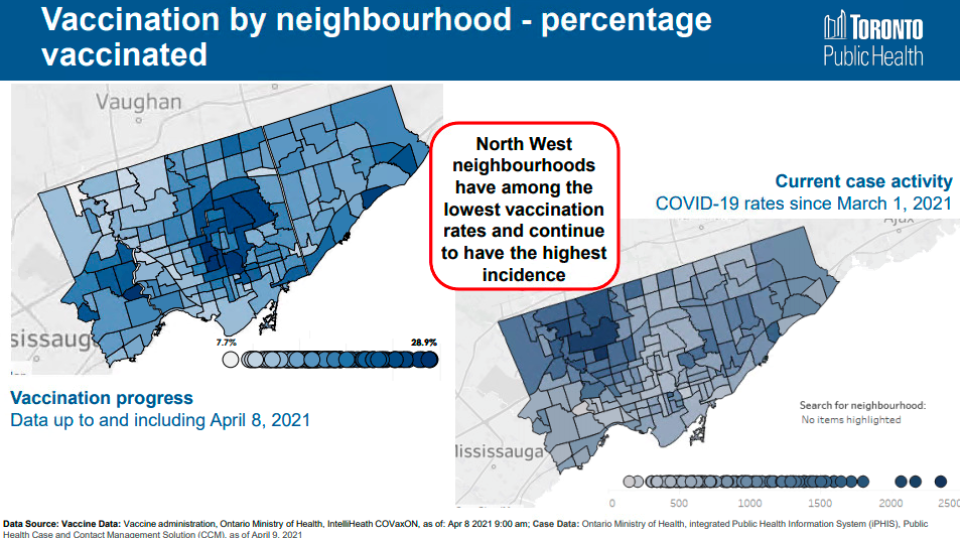 This is where each of those neighbourhoods stand in terms of cases per 100,000 people:

The areas identified by the city as having the lowest vaccine coverage include: Mount Olive-Silverstone-Jamestown (7.7 per cent), Black Creek (9.6 per cent), Henry Farm (9.8 per cent), Taylor Massey (9.9 per cent), and Humbermede (10 per cent).

These neighbourhoods have significantly higher case counts per 100,000 people, according to the city’s dashboard:

“Unfortunately, the areas that have the highest rates continue to have amongst the lowest vaccination rates as well, so our work is cut out for us, but I can assure you this is not going unnoticed by us,” de Villa said.

According to the latest data on the city’s dashboard, a little more than 17 per cent of Toronto’s population has received one dose of a COVID-19 vaccine. Just 2.3 per cent have received both doses.

De Villa is recommending that the board of health request both the federal and provincial governments to prioritize and increase Toronto’s COVID-19 vaccine supply.

She is also recommending that the board urge the Ontario government to prioritize COVID-19 vaccination registration for priority neighbourhoods.