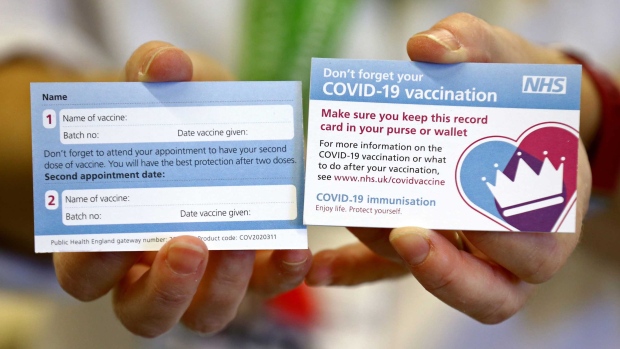 Images have been released of a credit card-sized document that will be given to recipients of the COVID-19 vaccine in the U.K., recording the specifics of the medication and reminding them to receive a second dose of the jab.

Britain’s healthcare providers are preparing to start administering the first doses of the Pfizer/BioNTech vaccine starting Tuesday — less than a week after the United Kingdom became the first Western nation to approve a vaccine.

In a first wave of vaccinations, around 50 “hospital hubs” in England will begin offering the vaccine to people over 80, higher-risk National Health Service workers and care home staff. After that, doctors’ offices will start operating local vaccination centres— around 1,000 across England — to vaccinate vulnerable patients.

Recipients of the Pfizer/BioNTech vaccine will receive two doses of the vaccine, which is stored at temperatures of minus-70 degrees Celsius (minus-94 Fahrenheit), three weeks apart.

Images of the NHS card show spaces for recording the vaccine name, the date of immunization and batch number of each of the doses given.

The cards will act as a reminder for a second dose of the jab, reading: “Don’t forget your COVID-19 vaccination” and reminding people to keep the record card in their purses or wallets.

The U.K. government has ordered 40 million doses of the Pfizer/BioNTech vaccine so far, enough to vaccinate 20 million people, or a third of the population. More deaths from COVID-19 have been recorded in the U.K. than anywhere else in Europe, according to data from Johns Hopkins University.

U.K. health officials expect to have up to 4 million doses of the Pfizer/BioNTech vaccine, which offers up to 95% protection against COVID-19, available by the end of December, Saffron Cordery, deputy chief executive of NHS Providers, told Sky News on Sunday.

Government ministers have avoided saying that “vaccine passports” were being planned in the country.

“No, that’s not being planned… I certainly am not planning to introduce any vaccine passports and I don’t know anyone else in government who is,” Michael Gove, Minister for the Cabinet Office, said on Tuesday.