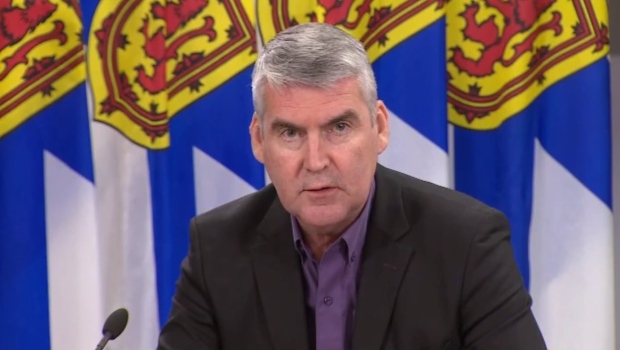 HALIFAX — As Nova Scotia reports 37 new cases of COVID-19 – the greatest number of cases the province has seen since April – Premier Stephen McNeil says it’s “time to take some tough measures” to limit the spread.

“Thirty-seven cases in one day. If that isn’t enough of a concern, I don’t know what is. If you haven’t woken up to the second wave, this is your wakeup call,” said McNeil before announcing new restrictions during a news conference in Halifax on Tuesday.

“There is no doubt that COVID is in our communities and it is trying to take a grip on the greater Halifax area. We need to stop the spread now.”

As of 12:01 a.m. Thursday, the following measures will apply for two weeks to the western and central Halifax area, which the province defines as HRM from Hubbards to, and including, Porters Lake and communities up to Elmsdale and Mount Uniacke in Hants County:

The restrictions will continue for two weeks until midnight Dec. 9, but they could be extended.

Schools, after-school programs and childcare will remain open. Certain personal service businesses, such as hairstylists, estheticians and nail salons, in western and central HRM can continue, except for procedures that cannot be done while a patron is wearing a mask.

Nova Scotians are also being urged to avoid non-essential travel in and out of the western and central Halifax Regional Municipality, which the province defines as HRM from Hubbards to, and including, Porters Lake and communities up to Elmsdale and Mount Uniacke in Hants County. Nova Scotians are also urged to avoid travelling to other Atlantic provinces for non-essential reasons.

The following new restrictions apply across Nova Scotia, in all zones:

Nova Scotia reported 37 new cases of COVID-19 on Tuesday — the highest single-day increase since April 23, when the province reported a record 55 cases.

There are now 87 active cases in the province. One previously reported case is now considered resolved.

Of the new cases, 35 are located in the province’s Central Zone, which includes the Halifax Regional Municipality.

There is also one case identified in the Western Zone, involving a student at Northeast Kings Education Centre in Canning N.S. That school will be closed for a week while health officials conduct contact tracing and sanitize the school.

There was also one case identified in the Northern Zone, though that case is connected to Halifax.

As of Nov. 23, 118 new cases have been identified in the province this month, marking the highest total of new cases in a month since April, when 853 new cases were reported.

There is no one in hospital due to COVID-19.

The province’s confirmed cases range in age from under 10 to over 90.

Sixty per cent of cases are female and 40 per cent are male.

There are cases confirmed across the province, but most have been identified in the Central Zone, which contains the Halifax Regional Municipality.

The provincial government says cumulative cases by zone may change as data is updated in Panorama, the province’s electronic information system.

The numbers reflect where a person lives and not where their sample was collected.

HALIFAX BAR AND RESTAURANT PATRONS URGED TO GET TESTED

Nova Scotia Health is asking anyone who works in a licensed establishment or went to a bar or restaurant in the Halifax Regional Municipality after 10 p.m. in the last two weeks to book a COVID-19 test, even if they don’t have symptoms.

The announcement is part of what the government is calling a “broad asymptomatic testing strategy for people who go to or work in late-night bars and restaurants.”

People who work in a licensed establishment or have been to a bar or restaurant in urban and suburban HRM after 10 p.m. since Nov. 10 are asked to visit the COVID self-assessment page to schedule a COVID-19 test.

The app, which can be downloaded through the Apple App Store or Google Play, notifies users if they may have been exposed to someone who has tested positive for COVID-19.

Anyone who experiences a fever or new or worsening cough, or two or more of the following new or worsening symptoms, is encouraged to take an online test or call 811 to determine if they need to be tested for COVID-19:

Anyone who tests positive for COVID-19 is required to self-isolate at home, away from the public, for 14 days.

Residents of New Brunswick, Prince Edward Island and Newfoundland and Labrador are not required to self-isolate when travelling to Nova Scotia, but they must be prepared to provide proof of their place of residency at provincial borders.

Visitors from outside the Atlantic region who have already self-isolated in another Atlantic province for 14 days may travel to Nova Scotia without having to self-isolate again.

It is mandatory to wear a face mask in indoor public spaces in Nova Scotia.