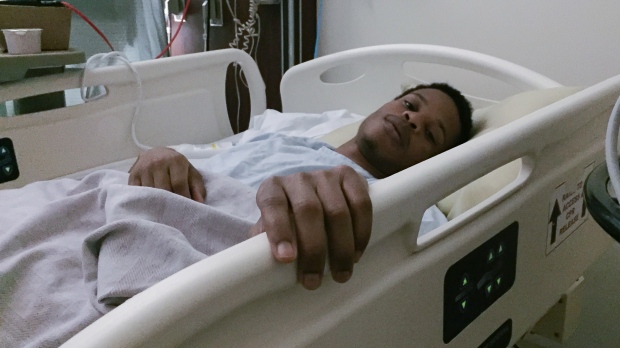 TORONTO — When Matthew John Derrick-Huie went to the doctor with chest pain and shortness of breath in 2017, he didn’t know he was about to embark on a two-year medical nightmare.

The 24-year-old Canadian rapper who goes by the stage name “John River,” told CTV News that he went to the emergency room five times before doctors took him seriously and on that fifth visit, they gave him a spinal tap to test for meningitis.

In the aftermath of the operation, however, River began to develop an “incredible, crushing feeling” in the back of his head that made it hard from him to concentrate and discuss his situation coherently.

“I felt I had been trying and pushing so hard with every fibre in my body,” he said. “I’m not a quitter. I don’t think I’m weak. I don’t believe in giving up in any capacity in my life and even for me, I was unbelievably outmatched. “

For the next 60 days, River visited family doctors, specialized clinics and emergency rooms as often as 30 times in search for an answer, but failed to find one. Some doctors told him he was suffering from anxiety and depression and prescribed him antidepressants, but he knew that wasn’t the issue.

“One physician told me that I was in a depressive state and I just didn’t realize,” he said.

“I said: ‘Respectfully, I lost my house twice when I was 17, my cousin who used to live with us was murdered…with all due respect, if I was going to have an anxious breakdown, I feel like it would’ve happened already.’”

It wasn’t until River’s family took to social media that they were able to find a doctor who would take a look at River’s case. The doctor soon discovered River’s brain was sagging in his skull due to low cerebrospinal fluid levels. The doctor believed River’s spinal canal had been leaking since that meningitis test two months prior. Cerebrospinal fluid leaks are a known complication of spinal tap procedures.

”I understand (cerebrospinal fluid) leaks are what some people would call a rarity and a difficult diagnosis, but I don’t think that’s applicable here,” he said.

Rivers questions why doctors didn’t follow up with him after the original operation and given him an immediate treatment to fix the leaking.

“They knew they had given the patient a procedure in which you told him: ‘For the next two days, you may feel like you want to die.’ If you don’t proceed with a follow-up procedure, one would have to assume that that patient is still out there.”

River required eight months of recovery and also wonders why no one would listen to his pleas for help.

“I absolutely, unequivocally, no doubt, feel that it absolutely had to do with the fact I was a young black man,” he said.

River adds that he felt multiple instances of racism as he dealt with health-care providers, including one visit when a nurse accused him of visiting the hospital solely for drugs.

“She said to me: ‘I know you are here for drugs, why don’t you just tell us which drugs they are and we’ll expedite this process,’” he said. “How is it within a two-minute time period (that) you were able to come to the distinction that I either came to your hospital to abuse narcotics or to sell narcotics?”

River said it was only after he spoke publicly about his medical situation on Twitter that other members of the black community reached out to him with similar stories dating as far back as the 1970s.

Dr. Onye Nnorom, a family doctor who works with the University of Toronto to advance the health of black people in Canada, said River’s experience in the health-care system is one of many similar stories she’s come across.

“I do hear about experiences of racism and I’ve heard about it not only from my patients, but also from family members (and) from colleagues, so it is certainly a problem,” she said. “I think one of the biggest problems is that we’re not able to collect data to demonstrate it.”

“From the patient’s end, that really makes a person feel like they’re not being respected.”

Racism within the Canadian health-care system is not only an issue among black Canadians. In 2017, an external review found several Indigenous women had felt pressured into sterilizing themselves immediately after childbirth at a hospital is Saskatchewan.

Additionally, a report concerning the case of Brian Sinclair, who died of a treatable bladder infection in 2008, found emergency staff at a hospital in Winnipeg ignored him for 34 hours because they assumed he was homeless or intoxicated.

In 2018, the Canadian Public Health Association acknowledged that “we are all either overtly or inadvertently racist and that the influence of this racism affects the health of individuals and populations” and offered several recommendations for all levels of government and health-care providers, including a complete review of their policies and to provide “system-wide anti-racism and anti-oppression training for all staff and volunteers.”

Kathleen Finlay, the CEO and founder of The Center for Patient Protection, called River’s treatment “appalling.”

“Anytime a person presents multiple times to a hospital or a health-care provider for the same symptoms or worsening of their symptoms, that should send up big red flags, that should not be happening,” she said. “Fortunately, the outcome here worked out well, but patients can actually die in these situations.”

The Ontario Ministry of Health declined to comment directly about River’s case and was not immediately available to respond to more generic questions on people of colour in the health-care system.

River, who was nominated for a MuchMusic Video Award in 2015, took two years away from music to deal with his health situation. He has since returned to his promising career and plans to advocate for equality within the health-care system.

“The only thing that’s on my mind every day is how much pain I went through,” he said. “I could never consciously allow somebody else to go through what I went through.”

“If we save one life because of the pressure that we apply today, then I can say to myself: ‘OK, I did my job.’”

River’s first song since the ordeal, titled “Burn the Boats,” discusses his misdiagnosis and how he is now “back from the dead” following the complications.