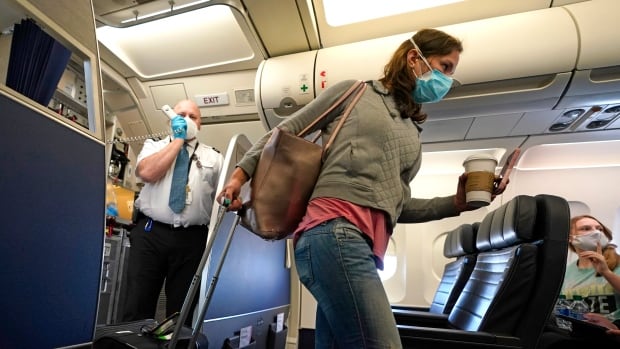 Non-medical masks have been required for air travellers in Canada since mid-April to prevent the spread of COVID-19.

But a ministerial order issued Friday closes a loophole that may have made it easier for some flyers to avoid face coverings.

Passengers who are unable to wear a face mask due to a medical condition must now present an official doctor’s note stating that they are exempt from the rule, or they will be denied boarding.

Since April 20, it’s been mandatory for air travellers to cover their mouth and nose during airport screenings while boarding and at all times during a flight, unless while eating, drinking or taking oral medication. Infants are not required to wear masks.

WestJet, one of Canada’s two largest airlines, said in a statement on Twitter that its passengers have done an excellent job of adhering to the rule so far.

“Travellers are required to show that they have a suitable face covering prior to boarding a WestJet flight and will be asked to temporarily remove the mask while their identification is verified,” the company said. “Should a guest be unable to provide a physician’s exemption, they will be denied travel until clearance is produced.”

The airline said if travellers want to fly without a mask, they must provide a medical note that:

There are medical reasons that could make wearing a mask difficult, from certain lung conditions to anxiety disorders.

As mandatory mask rules have rolled out in cities across the country during the pandemic, some groups have created and distributed illegitimate medical exemption cards to protest city bylaws.

In Edmonton, the city is offering exemption cards to those who ask — without requiring proof of a medical condition.

Canada’s border with the United States is still closed to nearly all non-residents, and Transport Canada continues to recommend against all non-essential travel. International travellers are required to isolate for 14 days upon their return to Canada.