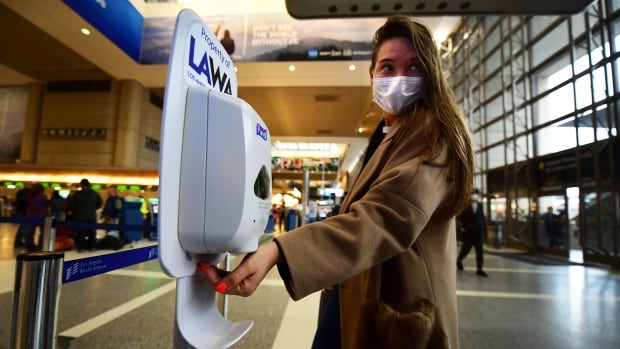 Prime Minister Justin Trudeau is set to speak to provincial, territorial and Indigenous leaders today about COVID-19 — but he’ll do it from self-isolation, as his wife is among the almost 160 Canadians who have tested positive for the novel coronavirus.

The news of Sophie Gregoire Trudeau’s positive test for COVID-19 came Thursday night, just hours after provincial officials in Ontario announced that publicly funded schools would be closing from March 14 through to April 5.

The school closure — which tacks two weeks on to the upcoming March Break — was made at the recommendation of the province’s chief medical officer.

Case numbers are still on the rise around the world, but there are signs of progress in the fight against the novel coronavirus, particularly in China, where the disease first emerged.

More than half of the world’s 128,000 people infected have already recovered. Most patients have only mild or moderate symptoms such as a fever or cold, though severe symptoms including pneumonia can occur, especially in older adults and people with existing health problems.

Here’s a look at what’s happening with COVID-19 in Canada, the U.S., the global economy and some of the harder-hit regions of the world.

Infectious disease experts and a doctor specializing in the elderly answer your questions about the COVID-19 pandemic. 9:03

Schools are closing in Ontario. Provincial officials in B.C. and Quebec are cautioning residents about international travel. Even in provinces without confirmed cases of COVID-19, people are being urged by health officials to practice proper hand hygiene and take precautions like staying home when sick.

In Ontario, the latest news is that schools are closing. The premier’s office said Thursday that it recognizes that the closures will have a “significant impact” on parents, students and communities as a whole, but Doug Ford’s office said “this precaution is necessary to keep people safe.” Read more about what’s happening in Ontario.

In B.C., the province’s top doctor is cautioning against all non-essential travel outside Canada, and recommending that large events be cancelled. Dr. Bonnie Henry said Thursday that people who leave the country and return to B.C. — including people who travel to the U.S. — should stay away from work and school for a period of 14 days. Read more about what’s happening in B.C.

In Alberta, the province’s top doctor is also calling for the cancellation of events of more than 250 people. Dr. Deena Hinshaw said Thursday there’s a “window of opportunity for Alberta to slow the spread of the virus.” As in B.C., Albertans are being advised not to travel abroad, and are being asked to self-isolate when they return. Read more about what’s happening in Alberta.

In Quebec, some school boards and universities will be shutting down, including major school boards in Montreal. The planned closures in Quebec come after Premier François Legault introduced his sweeping plan for the province, which included mandatory self-isolation for public sector workers who travelled abroad and voluntary isolation for anyone else who made a similar trip. Read more about what’s happening in Quebec.

In Manitoba, there were three presumptive cases reported Thursday. The province said it was opening screening centres in Winnipeg for the novel coronavirus in a bid to increase testing. Read more about what’s happening in Manitoba.

In Saskatchewan, the province reported its first presumptive case Thursday in a person with a recent travel history to Egypt. Read more about what’s happening in Saskatchewan.

In New Brunswick, the top medical officer is calling for the cancellation of all events with more than 150 people. The province has reported one confirmed case of COVID-19. Read more about what’s happening in New Brunswick.

The Public Health Agency of Canada says the risk associated with COVID-19 is low for the general population, but they note that could change quickly. People who are over 65, have a compromised immune system or underlying health conditions face a higher risk of “more severe outcomes” if they contract the virus — which the WHO says is mild for most who get it.

As of early Friday morning, provinces in Canada were reporting almost 160 presumptive and confirmed cases.

Here’s a look at what’s happening in the U.S.

People fretted over the health risks to the elderly, threatened jobs and dwindling savings while caring for children staying home from shuttered schools.

While Washington scrambled to shape an economic rescue package, the European Union pushed back against Trump’s sharp restrictions on travel from Europe to the United States, slamming Trump’s “unilateral” decision and declaring the virus a “global crisis, not limited to any continent, and it requires co-operation.”

WATCH: How scientists at Johns Hopkins University are tracking COVID-19

Scientists at Johns Hopkins University had predicted the COVID-19 outbreak and are now working to track the virus. 2:03

Trump defended his decision to not notify all EU leaders ahead of the announcement. “When they raise taxes on us, they don’t consult us,” Trump said. “I think that’s probably one and the same.”

Across the U.S., where cases have topped 1,600, a sense of urgency was pervasive. Professional athletes and entertainers were among those infected.

Schools emptied of students and workplace cubicles went vacant. Crowded gatherings were restricted from New York to California, and dozens of cultural hubs were closed. Disneyland and Disney World will close in coming days. And sports fans couldn’t cheer their favourite teams from the safety of their living rooms since basketball, baseball, hockey and other leagues cancelled and postponed games.

European markets were mostly higher Friday after a turbulent trading session in Asia. Shares rose in Paris and London but fell 6.1 per cent in Japan following Wall Street’s biggest drop since the 1987 Black Monday crash.

Friday the 13th brought wild swings for some markets as governments stepped up precautions against the spread of the novel coronavirus and considered ways to cushion the blow to their economies.

Benchmarks in Japan, Thailand and India sank as much as 10 per cent early in the day, but India’s Sensex gained 3.3 per cent in afternoon trading. In Bangkok, the Thailand SET fell 1.3 per cent after its 10-per-cent plunge triggered a temporary suspension of trading.

The NHL, NBA and MLB suspend their seasons and the Juno Awards have been cancelled in order to prevent the spread of COVID-19. 1:59

Markets worldwide have been on the retreat as worries over the economic fallout from the coronavirus crisis deepen and the meltdown in the U.S., the world’s biggest economy, batters confidence around the globe.

But there were signs that government action was beginning to resonate with panicked investors as some ventured back into markets in search of bargains.

Australia’s S&P/ASX 200 jumped 4.4 per cent to 5,539.30 after state and territorial leaders agreed to raise spending to counter the impact of the viral outbreak that has spread from central China across the globe, infecting 128,000 people.

In Italy’s hardest-hit Lombardy region, hospitals were overwhelmed with both the sick and the dead. The country’s restaurants, cafes and retail shops closed in a lockdown on personal movement, though grocery stores, pharmacies and markets were allowed to operate.

France, Ireland, Denmark, Norway, Lithuania, Algeria and Slovakia shut down their schools, and Europe’s most successful soccer team, Real Madrid, put all its players into quarantine after one tested positive. The Czech government tightened border checks for some countries, and Slovakia closed its international airports and ground transport hubs.

WATCH: How is Europe reacting to Trump’s travel restrictions?

Long lines, anxiety and confusion at European airports after Donald Trump bans travel from Europe to the U.S. 2:01

Lawmakers in Denmark approved a temporary law giving authorities the ability to ban access to public places and stores and force people to undergo tests. Estonia declared “an emergency situation,” meaning no gatherings in public spaces.

Europeans were adjusting to new U.S. travel restrictions, which exempted Britain and Ireland, raising questions about the policy’s coherence.

China, where the virus emerged late last year, still accounts for more than 60 per cent of global infections. But on Friday it reported just eight new cases and seven deaths. More than 64,000 people have been released from hospitals.

With China’s caseload slowing, the government was helping other countries with its expertise. A Chinese medical crew was heading to Italy and surplus supplies were sent to Iran.

Chinese President Xi Jinping told the UN leader his nation wants to conduct joint research on drugs and vaccines and offer “as much assistance as it can” to countries where the virus is spreading. State media reported Xi told UN Secretary-General Antonio Guterres by phone that economic and daily life are gradually returning to normal in China thanks to “arduous endeavours” at prevention and control.

In Iran, where cases exceed 10,000 and there have been 400 deaths, Foreign Minister Mohammad Javad Zarif urged the Trump administration to immediately lift sanctions over the country’s nuclear program. He said they made it difficult to import medicine and medical equipment, including to identify and treat coronavirus patients.