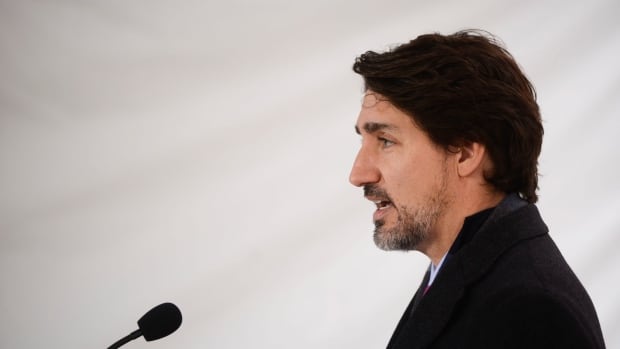 The federal government doesn’t know when the COVID-19 caseload will peak in Canada, but Prime Minister Justin Trudeau says that the country’s physical distancing efforts are making a difference.

“We don’t know exactly when we’re going to be peaking, but we do know if we continue to do this, if we continue to keep the measures in place that we have right now, we will get through this much, much quicker,” Trudeau told reporters Wednesday during his daily news conference outside Rideau Cottage.

Trudeau said that while there are significant differences between provinces and territories — Quebec, for example, has close to 10,000 cases while Nunavut has none — overall, Canada’s caseload lags behind most other countries.

“So we have a glimpse into what is effective and what is working to bend those curves in other countries that we are doing now,” he said.

“Our social distancing over the past weeks and staying at home has been very effective, and regardless of the model in place, it is clear that the best outcomes come when there is maximal social distancing, as we are pretty close to doing right now.”

Prime Minister Justin Trudeau was asked by CBC’s Tom Parry today to say when he thinks the COVID-19 virus will peak nationally, and to talk about the risk of future waves. 3:05

The government will continue to ramp up testing and follow-up with aggressive contract tracing to make sure people who may have been exposed to the virus stay in self-isolation, said the PM.

“These kinds of things are what give us the best chance of getting there,” he said.

Despite the progress, Trudeau cautioned Canadians likely will have to modify their daily behaviour in one way or another for months — maybe even a year — until there’s a vaccine.

“Once we are through this initial phase, we will then be in a mode — until there is a vaccine, which could take many many months, if not more than a year, to get to —  we will be calibrating very carefully our behaviours as a country, as a society, as an economy, to managing the existence and persistence of COVID19,” he said.

“Better testing, careful isolation of vulnerable communities, measures of gradually bringing back the economy will come.”

A number of provinces already have released grim projections of the novel coronavirus’s toll on their populations.

Last week, provincial health experts in Ontario said COVID-19 could kill 3,000 to 15,000 people in the province over the course of the pandemic.

Quebec, which leads the country in confirmed cases, outlined two scenarios describing what could happen by the end of this month.

The more optimistic scenario sees public health officials projecting 29,212 confirmed cases, with as many as 1,404 people in hospital at once — and 1,263 deaths.

The other scenario is darker: 59,845 confirmed cases, with as many as 3,208 people hospitalized at one time and 8,860 deaths. In this scenario, Quebec would not have enough beds in intensive care units to treat the more severe cases.

Alberta Premier Jason Kenney took to the airwaves last night warning that Alberta could hit the peak of its coronavirus infections in mid-May.

Trudeau said national modelling and scenarios will be released in “the coming days.”

WATCH: Trudeau asked how Canadians will return to work and what will happen when summer comes