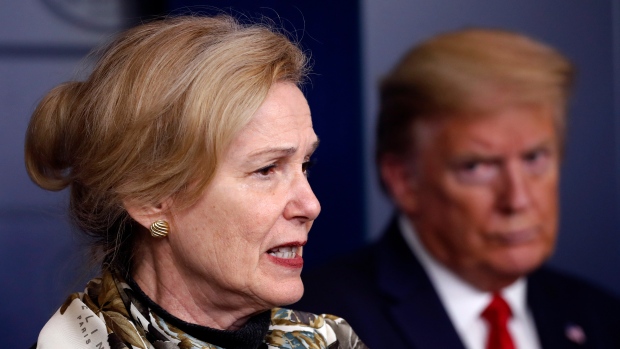 U.S. President Donald Trump criticized Dr. Deborah Birx in a Monday tweet after she warned the pandemic is “extraordinarily widespread” in the U.S.

The dust-up comes as the country continues to be ravaged by coronavirus, with more than 150,000 U.S. citizens dead and more than 4 million cases. Trump has consistently lied and misled mostly in attempts to downplay concerns about the virus as he presses for schools and businesses to reopen.

“So Crazy Nancy Pelosi said horrible things about Dr. Deborah Birx, going after her because she was too positive on the very good job we are doing on combatting the China Virus, including Vaccines & Therapeutics. In order to counter Nancy, Deborah took the bait & hit us. Pathetic!” Trump wrote.

When Trump was asked what he meant in his tweet, the President sidestepped the question.

“Well, I think that we’re doing very well and we have done as well as any nation,” he told reporters at a press briefing Monday afternoon.

“I told Dr. Birx I think we’re doing very well. She was in my office a little while ago. She’s a person I have a lot of respect for. I think Nancy Pelosi’s treated her very badly,” Trump added. “And I’m just referring to the fact that I thought that, really, they should say the job we’ve done … I think we’re just doing very well.”

Birx sounded the alarms during an appearance on CNN Sunday, telling CNN’s Dana Bash on “State of the Union” that the pandemic has reached a new phase.

“What we are seeing today is different from March and April. It is extraordinarily widespread. It’s into the rural as equal urban areas,” she said, suggesting that some Americans in multi-generational families should start wearing masks inside their homes.

She did not reject a warning by former Federal Drug Administration Commissioner Dr. Scott Gottlieb that there could be 300,000 coronavirus deaths by the end of the year, saying, “Anything is possible.”

Birx also responded to remarks from House Speaker Nancy Pelosi, who said on ABC’s “This Week” that she did not have confidence in the task force coordinator because the President continues to spread disinformation.

“I think the President is spreading disinformation about the virus and she is his appointee, so I don’t have confidence there, no,” Pelosi said.

Birx then defended herself on Sunday.

“I have never been called pollyannish, or nonscientific, or non-data driven,” Birx said. “And I will stake my 40-year career on those fundamental principles of utilizing data to really implement better programs to save more lives.”

At an executive order signing on Monday, Trump was asked by CNN’s Jim Acosta why coronavirus task force health experts are contradicting him.

He did not use the opportunity in front of reporters to slam Birx or expand on his Monday morning tweet.

Birx has been able to develop a close relationship with the Trump White House, which has tainted her reputation among some public health experts. She has avoided openly criticizing the administration. Fauci, who has taken a more public-facing role with many media appearances, has earned more irritation from the President, who openly attacked the doctor and questioned during a press briefing last week why Fauci’s approval was so high.

And White House trade adviser Peter Navarro wrote a USA Today op-ed slamming Fauci, who, he claimed, “has been wrong about everything I interacted with him on.”

The White House insisted there has been no effort to undermine the nation’s leading infectious disease expert, but Navarro said last week he did not regret the op-ed.