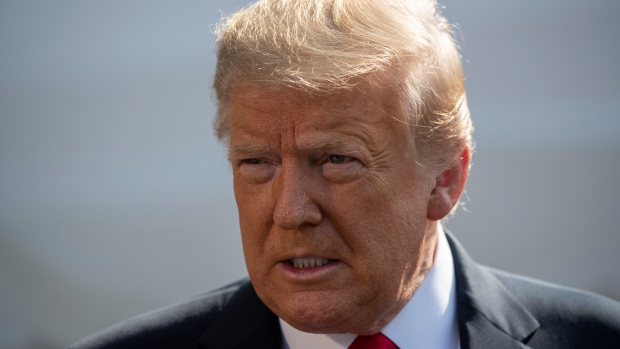 Under fire for his handling of the coronavirus pandemic, U.S. President Donald Trump pivoted Friday to a longstanding campaign promise — to lower drug prices.

The president resurfaced a kitchen sink of controversial proposals aimed at reducing Americans’ drug costs, which have advanced little during his term. He signed four executive orders, including ones on importing medications from Canada and basing the cost of drugs in the U.S. on their prices in other countries — both of which progressive Democrats, including Vermont Sen. Bernie Sanders, have pushed.

The efforts, which largely reaffirm the policies of the administration, are unlikely to have an effect before the November election, if they ever do. Most require rule making by the Department of Health and Human Services and could be challenged in court.

Notably, however, Trump strongly advocated allowing Medicare to negotiate prices — a measure he slammed House Democrats for including in their drug price bill last December. The Medicare Modernization Act of 2003, which established Medicare’s Part D drug plan, banned such negotiation to secure the votes of Republican lawmakers.

“Under our ridiculous system, which has been broken for decades, we aren’t even allowed to negotiate the price of drugs,” Trump said Friday just prior to signing the orders. “Can you imagine? What kind of a system is that? It’s going to end.”

But he also said that drug company executives, whom he has been courting to swiftly develop vaccines and treatment for COVID-19 and inking hefty deals to do so, were coming to the White House on Tuesday to present their ideas for reducing costs. Trump said he’ll consider not implementing the order on international pricing if talks with drug manufacturers are successful.

The pharmaceutical industry swiftly condemned the measures, pointing to Trump’s State of the Union address earlier this year in which he said he would never let socialism destroy American health care.

“Yet, in the middle of global pandemic, when nearly 145,000 Americans have lost their lives and millions of others have suffered untold economic hardships, this administration has decided to pursue a radical and dangerous policy to set prices based on the rates paid in countries that he has labeled as socialist, which will harm patients today and into the future,” said Stephen Ubl, CEO of PhRMA, a leading industry association.

Price setting: The president first outlined an International Pricing Index proposal to set Medicare reimbursement levels for certain drugs on their cost in other countries in October 2018, seeking to bolster Republicans’ standing on health care days before the midterm election. Most other nations pay far less for medications because their governments are involved in determining the prices.

The proposal, which runs counter to Republicans’ allegiance to the free market system, immediately ran into major resistance from drug companies. Such blowback has doomed prior administrations’ attempts to control Medicare payments.

Drug importation: Another executive order pushes allowing drug importation from Canada, where prices are much lower. The Trump administration took hesitant first steps in this direction last year, proposing to allow states, wholesalers and pharmacies to submit plans on how they would import certain drugs from Canada. It would also allow manufacturers to import lower-cost versions of the drugs they sell in other countries.

Several states have passed laws to set up such programs and Florida has submitted a proposal, but they all need approval from the Department of Health and Human Services.

This concept, long opposed by Republicans and supported by Democrats, has not been embraced by Food and Drug Administration commissioners or, in the past, by HHS Secretary Alex Azar, who called it a “gimmick” in 2018 but has since changed his tune. Concerns include whether the medications would be safe and whether Canada has enough supply to make a dent in US prices.

The Canadian government also has expressed reservations, saying it will protect its domestic supply of medication.

Drug rebates: Trump also signed an executive order calling for effectively banning drug makers from providing billions of dollars in rebates to pharmacy benefit managers and insurers — a radical change in the way many drugs are priced and paid for in Medicare and Medicaid. Instead, drug companies would be encouraged to pass the discounts directly to patients at the pharmacy counter.

The administration had backed down from this controversial effort last summer. The proposed rule was expected to raise Medicare premiums, while only saving money for the 30% of Medicare Part D enrollees who spend a lot on medication, according to the administration’s estimates. It would also have cost the federal government US$177 billion over 10 years, according to the Congressional Budget Office.

The order directs the HHS secretary to make sure the action will not increase Medicare beneficiaries’ premiums or federal spending.

During his remarks Friday, Trump slammed pharmacy benefit managers, who negotiate rebates from drug manufacturers to insurers in exchange for better coverage terms — often in the form of lower copays for brand-name drugs.

Calling these managers shadowy middlemen, the president accused them of “bilking Medicare patients with these high drug prices, while they pocket gigantic discounts.”

The pharmacy benefit managers’ industry group said the rebate rule should not be resurrected and objected to the idea that its members are “padding their bottom line through rebates.”

“Reviving a rebate reform proposal now does not address the underlying flaws — that it will drastically increase Medicare premiums for America’s seniors and most vulnerable,” said JC Scott, CEO of the Pharmaceutical Care Management Association. “Most importantly, the proposal on rebates does nothing to address manufacturers’ list prices for prescription drugs.”

Drug makers, who used to be the target of Trump’s pricing ire until the pandemic struck, have supported this measure.

Insulin prices: The final order directs Federally Qualified Health Centers, which provide primary care services to underserved communities, to pass along discounts on insulin and EpiPens to their patients.

In May, amid softening support among older voters during the pandemic, Trump announced a plan to enable senior citizens to get Medicare prescription plans that cap copays for insulin at $35 for a month’s supply. He said he hoped “the seniors are going to remember it.”