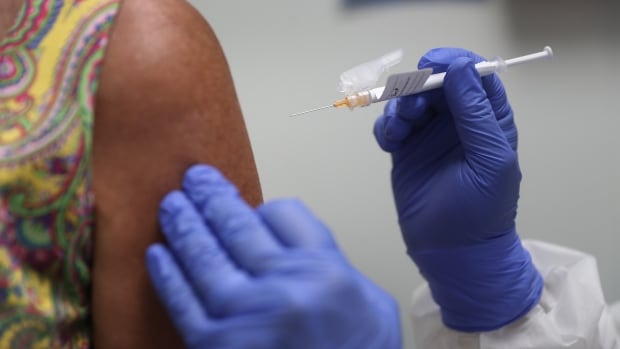 Canada’s federal government has signed an agreement in principle to acquire up to 76 million doses of a potential COVID-19 vaccine being developed by an American company.

The vaccine in question has been developed by Maryland-based biotechnology company Novavax, and is one of more than 100 in development around the world, each of which targets the virus that causes COVID-19 in a different way.

At last count, the virus has killed more than 846,000 people around the world since the start of this year.

Novavax’s vaccine is known as a “protein subunit” vaccine, which has the advantage of being manufactured faster than some other types of vaccine but generally doesn’t produce as strong an immune response as some other potential options.

The company released promising results of a very small clinical trial earlier this month, which showed it produced higher levels of the antibodies in healthy volunteers after two doses than those found in recovered COVID-19 patients.

The initial trial tested 106 subjects aged 18 to 59 with the vaccine, along with 25 people who received a placebo. The next phase of testing will include many more people, and at least half of them will be between the ages of 60 and 84, an age bracket of people who face the highest risk of having the worst outcomes from being infected, based on what we know about the virus.

The company plans to start much larger late-stage clinical trials soon, and told Reuters last month that if all goes well, they expect they could obtain regulatory approvals as early as December. The company said Monday the vaccine, should it work and be safe, would be available to Canadians as early as the second quarter of 2021.

“We are pleased to work with the Canadian government on supply of our COVID-19 vaccine, an essential step to ensure broad access of our vaccine candidate,” said CEO Stanley C. Erck in a release.

“We are pleased to announce this agreement with Novavax, which will give Canadians access to a promising COVID-19 vaccine candidate,” Canada’s minister of public services and procurement, Anita Anand, said in a news release.

“This is an important step in our government’s efforts to secure a vaccine to keep Canadians safe and healthy, as the global pandemic evolves.”

Novavax has signed similar deals with the United Kingdom, India, the Czech Republic, South Africa and Japan to supply doses of the potential vaccine.