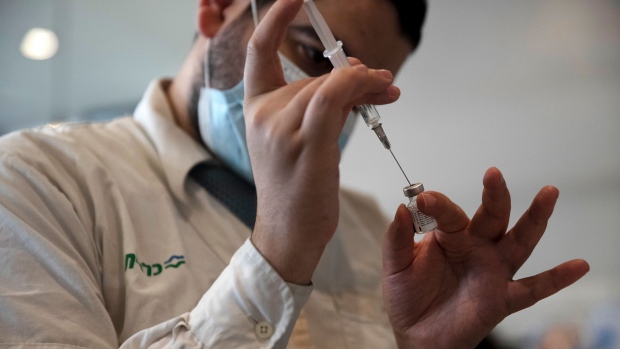 CHICAGO — U.S. health officials are hoping data on Israeli military personnel can help clarify the risk of heart muscle inflammation in younger people who have received Pfizer/BioNTech COVID-19 booster shots – a potential factor for U.S. regulators as they consider granting full approval of these boosters.

A condition called myocarditis has in rare cases been linked to the two-dose mRNA vaccines made by Pfizer/BioNTech and Moderna, mostly in younger males, but U.S. health officials are trying to better understand the risk.

“The real question that we have not yet answered is the safety data of an mRNA in young people vis-a-vis myocarditis,” Dr. Anthony Fauci, U.S. President Joe Biden’s chief medical adviser and the top U.S. infectious disease expert, said in a telephone interview.

“The Israelis will relatively soon have that data because they’re vaccinating everybody in the country I think from 12 years old up, including their military recruits,” Fauci added.

The U.S. Food and Drug Administration in August granted full approval for the Pfizer/BioNTech vaccine for people age 16 and older but the agency has not yet given full approval for its use as a booster shot. Instead, the FDA approved Pfizer’s booster under an emergency use authorization with approval on the full biologics license application (BLA) still pending.

In their review of Pfizer’s application regarding booster shots, FDA advisers in particular called out the lack of data on myocarditis in younger individuals.

Fauci said the Israel military data should help address the gap in safety information on mRNA vaccines, “which is one of the things that the advisory committee was interested in.” Fauci said he expects data from Israeli military recruits specifically to shed light on the safety of the vaccines in younger people in the context of myocarditis.

Biden’s administration had sought a broad campaign of boosters for all Americans in light of evidence of waning vaccine effectiveness over time.

The FDA and U.S. Centers for Disease Control and Prevention in September narrowed the recommendation for the Pfizer/BioNTech booster to Americans 65 and older, adults with underlying medical conditions and adults in high-risk working and institutional settings.

Fauci has said he believes the proper regimen for the mRNA vaccines will end up being an initial two doses a few weeks apart, followed by a booster shot a few months later.

In June, the FDA added warnings to labels on the Pfizer/BioNTech and Moderna vaccines about rare cases of myocarditis in adolescents and young adults.

The FDA has granted emergency use authorization but not full approval to the Moderna vaccine as well as a one-dose Johnson & Johnson shot. The FDA on Friday said it will consider Moderna’s application for booster shots at an advisory panel meeting on Oct. 14, and J&J’s booster application on Oct. 15.

Israel’s national digitized database includes data from the country’s four healthcare providers, which administer the vaccines, as well as other institutions including the military.

Fauci said U.S. officials plan to follow up with the Israeli Health Ministry about vaccination data involving military recruits. The ministry, which regularly analyzes the data, has shared its findings on vaccine effectiveness and safety with bodies such as the FDA.

An Israeli health ministry spokeswoman said she was unaware of any specific study of boosters among military personnel.

Reporting by Julie Steenhuysen; Additional reporting by Maayan Lubell and Dan Williams in Jerusalem; Editing by Will Dunham