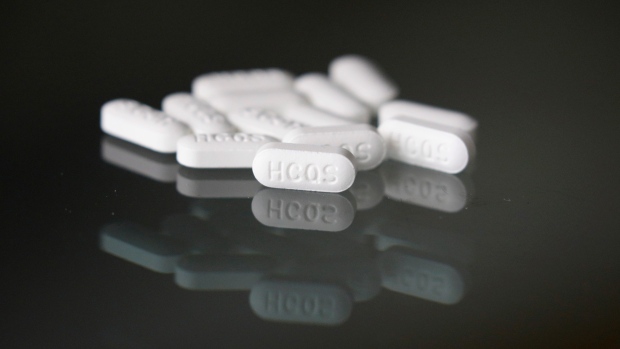 The National Institutes of Health announced Saturday that it has halted a clinical trial evaluating the safety and effectiveness of drug hydroxychloroquine as a treatment for adults hospitalized with COVID-19.

“A data and safety monitoring board met late Friday and determined that while there was no harm, the study drug was very unlikely to be beneficial to hospitalized patients with COVID-19,” the NIH said in a statement.

Hydroxychloroquine, which has been frequently touted by U.S. President Donald Trump — who has claimed to have used it himself — is typically used to treat malaria and rheumatoid conditions, such as arthritis.

The trial enrolled more than 470 adults patients hospitalized with coronavirus, or in an emergency department with anticipated hospitalization. The study found that those patients who were randomly assigned to receive the hydroxychloroquine treatment didn’t benefit from the drug, compared to those in the placebo group.

“In various studies, the drug had demonstrated antiviral activity, an ability to modify the activity of the immune system, and it has an established safety profile at appropriate doses, leading to the hypothesis that it may have also been useful in the treatment of COVID-19,” the NIH said in its statement.

The U.S. Food and Drug Administration on Monday revoked its Emergency Use Authorization for hydroxychloroquine to treat hospitalized patients with coronavirus, saying it was unlikely to provide any benefit based on the latest scientific research.

Starting in mid-March, Trump became a frequent cheerleader for hydroxychloroquine. He promoted the drug repeatedly, despite pleas from scientists to let studies decide if the treatment was safe and effective.

“HYDROXYCHLOROQUINE & AZITHROMYCIN, taken together, have a real chance to be one of the biggest game changers in the history of medicine,” Trump tweeted on March 21.

Fox News frequently echoed Trump, but both the network and the President quieted down about the drugs once studies started showing they didn’t work and possibly could hurt.