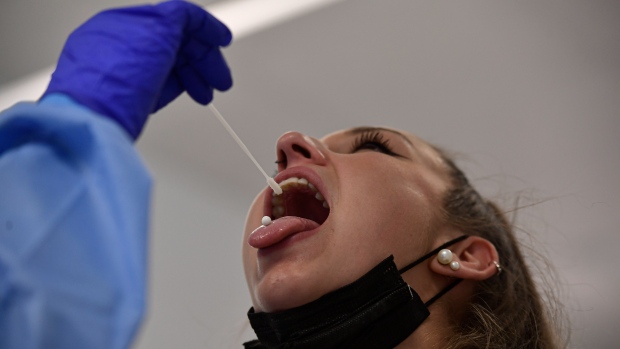 TORONTO — A new study believed to be the largest of its kind found that antigen rapid tests were overall 81 per cent accurate when compared with PCR test results, and were more accurate the more symptomatic a person was, adding more support to the idea that these tests could be used more widely.

Between Dec 23, 2020 and Jan 11, 2021, more than 6,000 people came to the Baltimore Convention Center Field Hospital (BCCFH), where researchers gave them PCR tests as well as rapid antigen tests.

The results surprised researchers, with the antigen tests showing an overall sensitivity of 81 per cent. Sensitivity refers to how well a test can correctly identify if a person has the virus or not.

“We found that virus was accurately detected by the rapid antigen test in 87 per cent of patients with COVID-19 symptoms and in 71 per cent of those who were asymptomatic — rates that surprised us because they were so high,” Dr. Zishan Siddiqui, assistant professor of medicine at the Johns Hopkins University School of Medicine and study lead author, said in a press release.

“This is a significant finding because the rapid test offers a number of advantages over the PCR test, including time savings, both in sampling and processing; cost savings; and most importantly, ease of distribution and application — basically anywhere — which can help overcome COVID testing disparities in medically underserved communities.”

Participants at BCCFH who received tests self-reported on their symptoms, and whether or not they believed they had been exposed to COVID-19. The majority of participants were asymptomatic, with 89 per cent not presenting with any symptoms.

For those with symptoms, 89 per cent were tested within a week of developing their first symptoms.

The rapid test was 99.8 per cent accurate at identifying when someone did not have COVID-19, which is called a test’s specificity.

“Despite the high negative predictive value, patients with negative results represent a large proportion of total positive cases,” the study cautioned. “Hence, a negative result does not preclude infection from a clinical and public health perspective.”

Quality checks of a random assortment of the antigen tests performed found that only 0.5 per cent of tests were indeterminate.

The study specifically used the BinaxNOW rapid antigen COVID-19 test, a test available in the U.S. but not in Canada, according to Health Canada’s list of authorized testing products.

While PCR tests are still the gold standard in accuracy for testing for COVID-19, they require trained staff, more special equipment and have to be sent off to a laboratory for testing. The benefit of rapid testing is that they are easier to conduct, can be administered outside of clinical settings, and provide results in around 15 minutes — which could be a huge help in letting people know fast if they need to quarantine.

“What we determined was that while the PCR test may be a better test from a clinical perspective — as it’s basically 100 per cent accurate at detecting SARS-CoV-2 — the rapid antigen test appears to be better from a public health standpoint because of its ease of use, and the fact that it proved to have sufficient accuracy, specificity and reliability for detecting the coronavirus in a high-volume setting,” Dr. James Ficke, professor of orthopaedic surgery at the Johns Hopkins University School of Medicine and co-director of the BCCFH, said in a press release.

“The field hospital was the perfect place to determine this because we could see how well both tests worked for a large number of people in a short amount of time.”

The study noted that 81 per cent sensitivity is higher than the 80 per cent threshold that the U.S. Food and Drug Administration has set for emergency use authorization, and that while the sensitivity is lower in asymptomatic patients, rapid testing could be considered for screening purposes.

The team is currently running tests comparing antigen testing with PCR testing in children, and have collected data on around 1,000 children so far. They hope to release that data in early 2022.