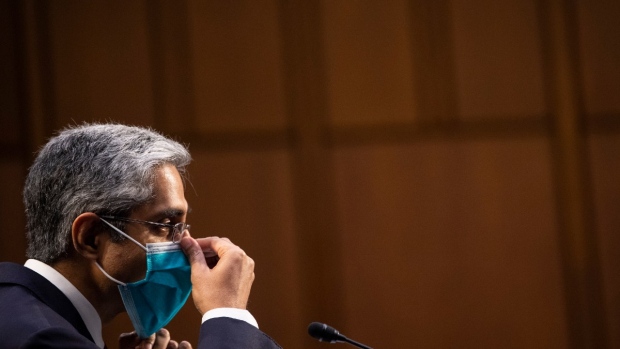 With a dangerous COVID-19 variant on the rise, health experts are urging people who are still hesitant to get their vaccinations. But the U.S. Surgeon General warns a big obstacle stands in their way: Misinformation.

“There is so much misinformation out there about the vaccine, coming through so many channels — a lot of it being spread on social media,” Dr. Vivek Murthy told CNN’s Erin Burnett. “It’s inducing a lot of fear among people.”

“Two-thirds of those who are unvaccinated in polls say that they either believe the myths about COVID-19 or think that they might be true,” he added.

Experts, including Dr. Anthony Fauci, have estimated that 70 to 85% of people in the U.S. will need to become immune to the virus through vaccination or infection in order to control community spread. But after initial surges, vaccination rates have slowed, and only 53.7% of the population has received at least one dose.

In addition, more than 1 in 10 people who have received one dose of the Pfizer/BioNTech or Moderna vaccine have missed their second dose, according to data shared with CNN by the U.S. Centers for Disease Control and Prevention.

That statistic is especially concerning to experts because studies have shown that the vaccines are much more effective against the Delta variant after the two-dose series is completed.

And the Delta variant is believed to be more transmissible and cause more severe disease than other strains.

Murthy said he is worried for those who are unvaccinated as the variant spreads.

Out of nearly 437,000 positive coronavirus cases reported in L.A. County since December 2020, 99.6% of those were among individuals who were unvaccinated, health officials said in a press release.

“The virus is still with us,” Los Angeles County Public Health Director Barbara Ferrer said at a press conference. “Even now, we need to be careful to mask and maintain distance from people outside of our households, especially if they’re not yet vaccinated.”

Missouri is the state with the largest proportion of the Delta variant of COVID-19 infections, according to the CDC. And hospitals in the state are feeling the stress of managing COVID-19 patients on top of their regular intake, one hospital leader told CNN’s Ana Cabrera on Thursday.

“We saw a very rapid escalation in our in-patient census starting June 1, we went from 26 to 90 in about three weeks. To go back to last year when our peak started, it took us six to seven weeks to escalate that quickly. Today to hit 97, it really took us almost two months to hit that level which we’ve done in under a month.”

Frederick said a return of typical hospital patients is exacerbating the issue.

“The difference between last year and this we have traditional business back we didn’t have last year during the initial surge. The demand for beds is higher for both COVID and non-COVID patients. It’s definitely a stretch.”

Frederick said there is also a high amount of pressure on available labour.

“The staff are right back into the mix of it, and I don’t think they were fully recovered from last year,” he said.

In a bit of good news, researchers reported Thursday that those who did not regain their sense of taste and smell when they cleared their COVID-19 infections should get them back after a year.

An ongoing experiment of about 100 people who lost their sense of smell in early 2020 showed it can take months for it to come back, but it does. Some patients didn’t realize or appreciate it, however, the international team of researchers reported in the Journal of the American Medical Association’s JAMA Network Open.

“At eight months, objective olfactory assessment confirmed full recovery in 49 of 51 patients (96.1%),” they wrote. Two continued to have an abnormal sense of smell a year later — one who couldn’t smell much and another who had an abnormal smell sense.

“Our findings suggest that an additional 10% gain in recovery can be expected at 12 months, compared with studies with 6 months of follow-up that found only 85.9% of patients with recovery,” they wrote.