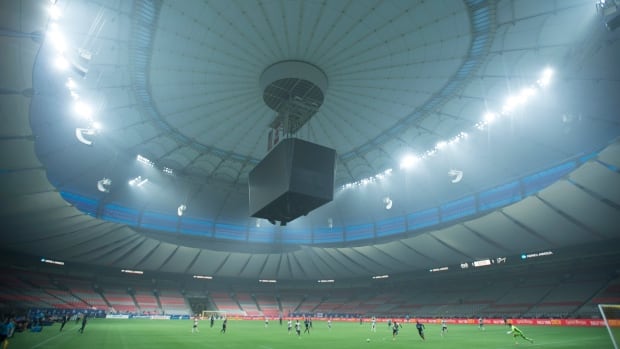 Smoke is expected to cloak two-thirds of British Columbia for another day or two, according to Environment Canada.

Air quality is only expected to improve marginally by Tuesday as an infusion of Pacific ocean air starts to push smoke from wildfires in Oregon and Washington state east.

“There are a few things going on that might help improve it,” said the agency’s Mike Gismondi. “But it doesn’t look like we are going to have widespread showers, so it won’t be enough to wash it all out.”

The acrid, grey smoke has been hanging over the majority of the province for several days, and worsened over the weekend.

Air quality in a number of cities from Vancouver Island to the Kootenays has been among the worst in the world, on and off, since Friday. Only the northern third of the province has escaped the haze.

Aerial footage of Cultus Lake near Chilliwack, B.C., shows the thick haze caused by wildfires in the United States. 1:01

Air quality statements have been issued for four regions of southwestern Alberta along the Rockies, but the federal weather office says alerts will likely expand before smoke exits that province tonight.

The smoke comes from hundreds of wildfires burning in Washington, Oregon and California that have destroyed whole communities and killed at least 35 people.