A lot of uncertainty remains around the initial rollout of COVID-19 vaccines in Ontario, the head of the province’s distribution task force said Monday, as public health officials reported a single-day high of 1,925 new cases of the illness.

At an afternoon news conference, retired general Rick Hillier said that lingering questions about the transportation and storage of Pfizer’s vaccine mean that there is no firm timeline yet on when it could reach vulnerable Ontarians, particularly front-line health workers and residents of long-term care.

“Every single day we learn something more about the characteristics and the properties of the vaccine and one of things is that the stability data when it’s moved is uncertain,” Hillier said.

“As of right now, we may be restricted somewhat in moving it after we receive it.”

Hillier said the vaccine will be more broadly available to the public starting in April during the second phase of the rollout, and it will take between six to nine months to distribute across the province.

“People are going to have to be patient that their turn will come,” he said.

Prime Minister Justin Trudeau announced this morning that 249,000 doses of Pfizer’s vaccine are set to arrive in Canada by the end of 2020. The doses will be distributed on a per capita basis, meaning each province will receive vaccine doses in numbers proportionate to their share of the population.

Hillier said Ontario plans to administer the vaccine in three phases, with the first expected to take between two and three months, depending on when the doses actually arrive. 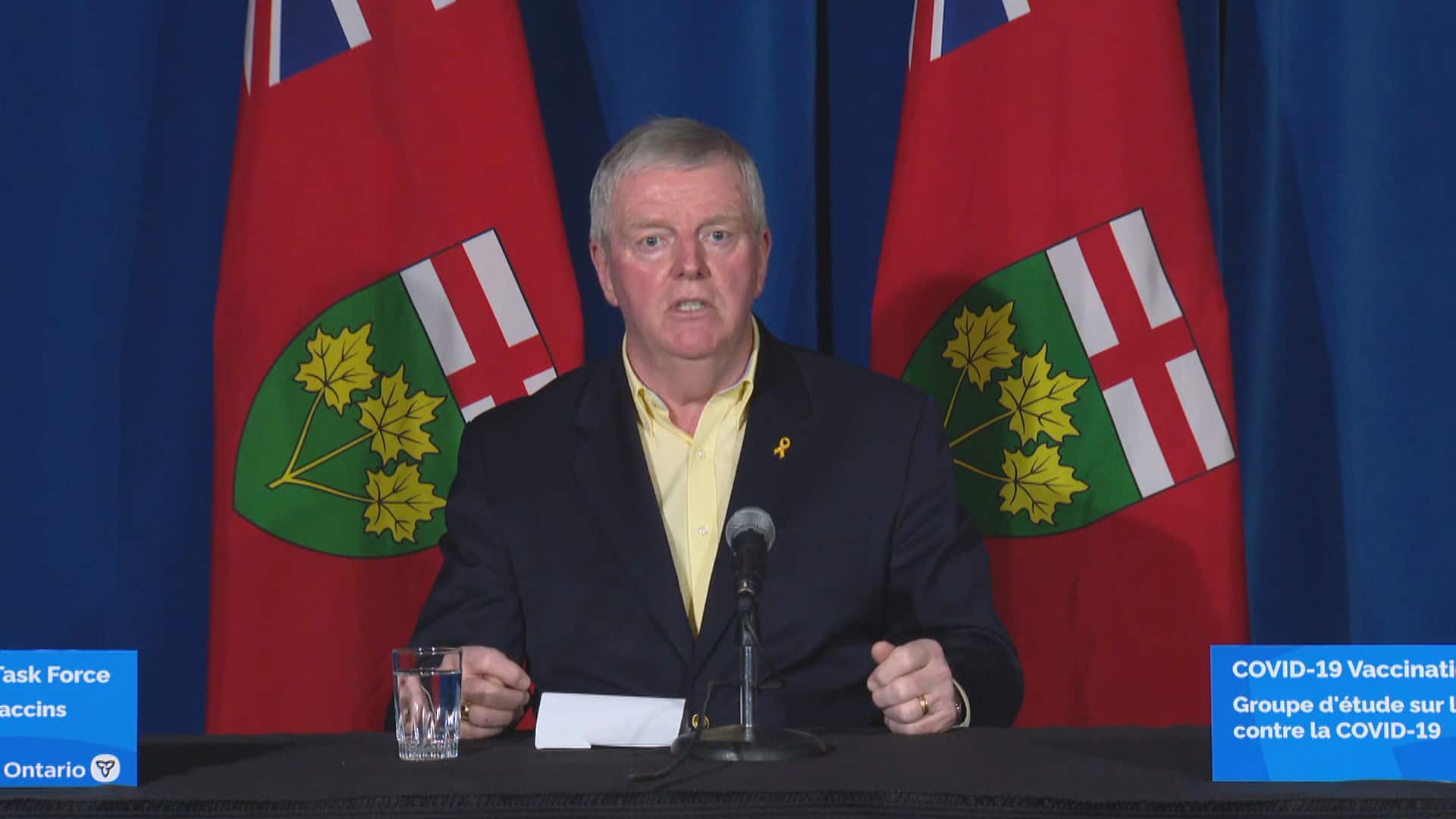 Retired General Rick Hillier says Ontario hopes to provide an “efficient” and “equitable” COVID-19 vaccination program, to provide every eligible person across the province with the opportunity to voluntarily get vaccinated. Watch the video for more details about the province’s three-phased plan of rolling out the vaccine. 3:08

Because the Pfizer vaccine requires specialized, ultra-low temperature freezers for storage, Hillier couldn’t say when it would be made available to the groups most in need. At first, vaccination sites may need to be set up at locations with the capacity to safely store the vaccine, meaning those being immunized would need to travel to the sites.

Ontario is expected to receive 2.4 million doses of vaccines in the first three months of 2021, according to Elliott. Of those, 1.6 million would be from Pfizer, while another 800,00 doses would be the Moderna vaccine. Both require two shots, 21 days apart. Neither has been approved by Health Canada yet, but top officials at the agency have said that could change as early as this week.

In addition to vulnerable seniors, their caregivers and health-care workers, adults in Indigenous communities, retirement homes, and recipients of chronic home health-care will also be priority groups during the first phase.

The third and final phase of the plan would then see the vaccine available through places like pharmacies on a regular basis, he added.

Also included in today’s new cases are 138 that are school-related: 109 students and 29 staff members. Some 803 of Ontario’s 4,828 publicly-funded schools, or about 16.6 per cent, have at least one case of COVID-19, while 10 schools are currently closed because of the illness.

The new cases push the seven-day average of daily cases to 1,820, the highest it has been at any point during the pandemic.

There are now 16,034 confirmed, active cases of the illness provincewide. They come as Ontario’s network of labs processed 45,283 test samples for the novel coronavirus and reported a test positivity rate of four per cent. Another 31,238 tests are in the queue to be completed.

Further, the number of people in Ontario hospitals with confirmed cases of COVID-19 climbed to 725, even though about 40 hospitals did not submit data in time to be included in today’s provincial update.

Of those patients, 213 are being treated in intensive care and 121 require the use of a ventilator. All three figures are new highs for the second wave of the illness currently gripping swaths of the province.

Public health officials also reported another 26 deaths of people with COVID-19, pushing the official toll to 3,798.

The change to orange includes restrictions on visitors to long-term care homes and beefed up testing in the facilities.

The measures will remain in place for at least 28 days.

All 3 Waterloo region hospitals have outbreaks

The president of a hospital in Waterloo region says all three hospitals in the area are currently experiencing a COVID-19 outbreak, leading to a concern about the facilities’ ability to maintain services.

Lee Fairclough, president of St. Mary’s General Hospital, says her facility declared an outbreak on Sunday that has been linked to five patients and two staff.

Fairclough says she’s concerned about the surge of COVID-19 in the community and the current hospital outbreaks in the region.

She says the situation could affect bed capacity as well as services such as scheduled surgeries and other procedures.