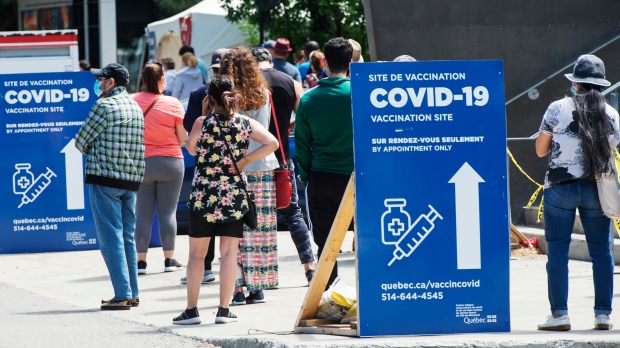 TORONTO — The novel coronavirus Delta variant, which has now been detected in 74 countries, is causing concern as it spreads, stalling re-opening campaigns abroad and raising questions in Canada.

Reports suggest it is 60 per cent more transmissible than the original virus, and a study from Scotland suggests the risk of hospitalization with the Delta variant is almost double that of other strains.

Concern is mounting — so much so that the U.K. has delayed its reopening by more than a month, shifting the new date to July 19.

“We’re seeing cases growing by about 64 per cent per week and in the worst affected areas, it’s doubling every week,” U.K. Prime Minister Boris Johnson said.

This is the same exponential growth the variant appeared to cause in India, where it was first identified. India suffered a massive outbreak that peaked in early May at almost 400,000 new cases a day, believed to be caused by the Delta variant.

One of the largest clusters of this variant in Canada is in Alberta, where it has infected at least 10 people despite double vaccinations.

“Staff are worried [about] the outbreak,” Cameron Westhead, vice-president of United Nurses of Alberta, told CTV News. “You never kind of know if it’s going to get out of hand and how well it will be contained.”

In Ontario, Dr. Barabara Yaffe, associate chief medical officer of health for the province, said Monday that while the Alpha variant is still the most dominant, the Delta variant is “growing rapidly.”

“The most recent statistics I have, for the week of May 16 to the 23rd, Delta variant was about 14 per cent of the specimens,” she said in a press conference.

“It is about one-and-a-half times more transmissible than the B.1.1.7 or Alpha strain.”

An analysis released by Public Health England looked specifically at how effective the vaccines were at keeping those with the Delta variant from being hospitalized, and found they were “highly effective” at preventing hospitalization, according to a press release.

“This evidence of the effectiveness of two doses against variants shows just how crucial it is to get your second jab,” Matt Hancock, Health and Social Care Secretary, said in the release.

A second study from Scotland published in the Lancet on Monday used national databases of PCR tests done and COVID-19 cases confirmed between April 1 and June 6, 2021, in order to estimate how effective vaccines were at preventing COVID-19 infection across both Delta and Alpha variants.

The study also found that the Delta variant seemed to spread more among younger people and those who were more affluent, and it was this study that noted the hospitalization rate of the Delta variant was double that of the Alpha variant.

“Given the observational nature of these data, estimates of vaccine effectiveness need to be interpreted with caution,” the study acknowledged.

But the concern around the Delta variant is still raising questions about whether Canada should consider slowing down its reopening.

“I think it’s a really smart thing for Canadian provinces and territories to consider whether or not to be more cautious than they might have been, thinking about even just a few weeks ago,” James Kellner, a member of the federal COVID-19 Community Task Groups, told CTV News.

Some politicians believe Canada’s speedy first dose delivery may be protective for now.

“The lion’s share of our vaccines have been mRNAs which are proving to be more effective, particularly on first dose, against that particular variant,” said Alberta Premier Jason Kenney.

Experts still say our best protection against the virus and its variants is to get more people to receive two doses, before this highly transmissible variant spreads further.