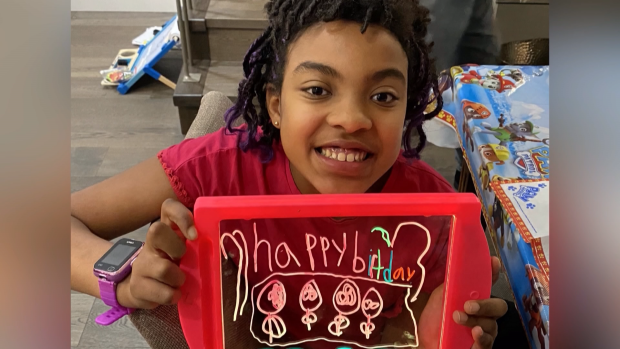 VANCOUVER — Barbara Insley said she noticed her daughter Makeda’s ever-present smile from the time she was just a baby, and even though her little girl is now 13, that hasn’t changed.

“No matter how tough things get, or how hard she works, that smile stays on her face,” Barbara said.

Makeda’s beaming expression was on display Thursday in Vancouver as the teen proudly stated her age during an interview with CTV News Vancouver.

“I’m not a kid, I’m a teenager now,” she reminded her mother with a grin.

Makeda said she’s enjoying volleyball and science and likes playing soccer with her five-year-old sister, Adina, and also shared some awards from her school, including one for leadership.

“These are from last year,” the Grade 7 student explained. “My principal gave me this one.”

Barbara said her daughter has a lot of empathy for other kids.

“She struggles doing a lot of things but she’s always on the sidelines cheering her friends on,” Barbara said. “So that’s always been her strength at school, is just being such a kind person.”

The struggles Barbara is speaking about stem from a devastating diagnosis that took years for doctors to determine. Makeda has a rare neurodegenerative disease called aspartylglucosaminuria, or AGU.

“By the time she was three years old, there was starting to be some reasonably significant gaps between her and the other kids,” Barbara said, and added her daughter had struggled with walking, and was a late talker as well.

“As she got older, you would sort of see the gap in maturity and emotional development between her and her peers, a little bit of difficulty understanding the games, not able to play on playground equipment, but it’s more subtle, so its really hard to diagnose.”

Makeda also described the effects of the disease.

“Everybody else is, like, faster than me, and I’m a little bit slower,” she said.

Barbara said they saw a lot of doctors, and received different diagnoses that never quite fit, from developmental co-ordination disorder to ADHD.

Finally, after years of genetic testing, there was a definitive diagnosis for AGU.

Barbara said there is currently no treatment or cure for the disease, which ultimately leads to a decline in cognitive and physical ability.

“It is a disease that causes regression, and that’s the scariest part of it, is watching your kid over time start to deteriorate,” Barbara said. “So that’s what I’m most afraid of.”

It is also fatal.

Barbara is now embarking on a campaign to save her daughter’s life, and the lives of others with the disease, by helping to raise money for a clinical trial in the states that will involve gene therapy.

She has connected with other families affected by AGU around the world for the fundraising effort.

“This gene therapy, assuming that it works, and it should work, is literally the cure, and in fact it will probably reverse a lot of the kids’ symptoms,” Barbara said.

For her part, Barbara is hoping to raise $500,000 through a charity she’s developed called the Rare Trait Hope Society, and an online fundraiser.

She said the trial, which may be selecting its first participants by late 2021 or early 2022, will also end up helping others with rare diseases.

“We take the learning from one clinical trial and we apply it to the next one, and eight lives saved turns into 50, turns into 100, turns into 1,000,” she said. “And these are all diseases that nobody will touch commercially, because there’s not enough kids that can be treated, but together, there is enough.”

Barbara adopted Makeda from Ethiopia when she was six months old, and said she wants to fulfill promises to her birth mother concerning her health and education.

“I want her to take this great empathy that she’s got for everybody and bring joy and light to the world for a lot longer than the time that this disease says that she’s got left,” she said.