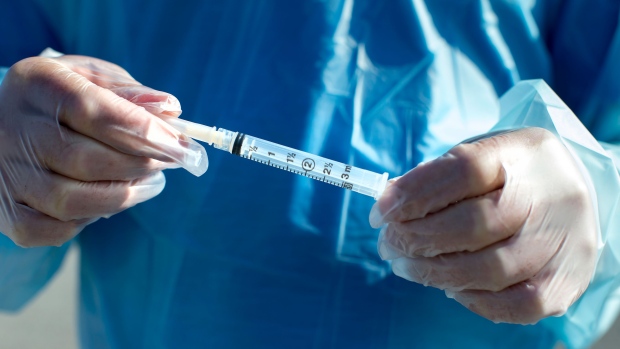 The COVID-19 vaccines that have been authorized for use in Canada so far are Pfizer-BioNTech, Moderna, AstraZeneca, and Johnson & Johnson. To date, more than 14 million doses have been administered across the country. With Canada set to receive large shipments of doses in upcoming weeks, CTVNews.ca has outlined which groups are recommended to be eligible to receive which vaccines, where they’ll be able to get it, and how many doses Canada has received to date and will be receiving in the future.

Decisions around eligibility are made at the provincial level, informed by recommendations from the National Advisory Committee on Immunization (NACI).

Health Canada authorized the Pfizer vaccine on Dec. 9, 2020, making it the first vaccine that was approved in Canada to prevent COVID-19. The two-shot mRNA vaccine has been authorized for Canadians who are 16 years of age and older, and has been offered at hospitals, mass immunization clinics, and pop-up clinics.

The government first began distributing doses of the Pfizer vaccine in December 2020, and as of last week, more than 9.5 million doses have been distributed across the country. While Canada was receiving just over a million doses each week in April, the supply will be doubling, with Canada receiving more than two million doses a week until the beginning of July, which will give the government a boost in reaching its goal of having all adults vaccinated by the end of September. With the incoming shipment of doses, NACI said that the four-month waiting period before the first and second dose may even decrease to a 1.5- to two-month waiting period.

So far, the government has invested in up to 76 million doses of the Pfizer COVID-19 vaccine.

The mRNA Moderna vaccine was authorized on Dec. 23, 2020 by Health Canada for individuals who are 18 years of age and older. Similar to Pfizer, the two-shot vaccine has been offered at local hospitals, mass immunization clinics, and pop-up clinics.

Shipments of the Moderna vaccine arrived a day after Health Canada’s approval, and it was first distributed to Canada’s North. As of last week, nearly 2.9 million doses of Moderna have been allocated across the country, with Canada expecting to receive approximately a million more doses next week.

Currently, the government has secured an agreement with the pharmaceutical company for 44 million doses.

The AstraZeneca vaccine – scientifically known as ChAdOx1-S – is manufactured by AstraZeneca as well as the Serum Institute of India, which calls its brand of the vaccine COVISHIELD. The vaccine and both manufacturers were approved by Health Canada on Feb. 26. The adenovirus vector vaccine is given in two doses, and while the vaccine was first authorized for Canadians who are 18 years of age and older, NACI has made recommendations on which age group should receive this vaccine. AstraZeneca was initially recommended for Canadians over the age of 65 in March, however NACI has now increased the eligibility to include more Canadians and is now recommending the vaccine to anyone who is 30 years of age and older, if they do not want to wait for an mRNA vaccine.

The vaccine is currently being offered at pharmacies, with many locations offering walk-in appointments and making COVID-19 vaccines more accessible for Canadians.

The AstraZeneca vaccine was first distributed in Canada in March, and as of last week, approximately 2.3 million doses have been distributed across the country. With the exceptions of the Northwest Territories and Nunavut, all provinces and territories have received shipments of this vaccine.

With both manufacturers combined, the government has secured a total of 22 million doses of AstraZeneca.

Johnson & Johnson’s COVID-19 vaccine was authorized by Health Canada on March 5. It is a single-dose, adenovirus vector vaccine. The vaccine was approved for Canadians who are 18 years of age and older, but similar to NACI’s suggestions with AstraZeneca, the Johnson & Johnson vaccine is recommended for individuals who are 30 years of age and older and for individuals who do not wish to wait for an mRNA vaccine.

NACI also recommended using the one-shot vaccine for populations for whom it may be more difficult to schedule a second dose. Experts say this could include those living in shelters or experiencing homelessness, and that the addition of a single-dose vaccine could also create more pop-up clinics.

Last Wednesday, a shipment of 300,000 Johnson & Johnson doses arrived in Canada, however Health Canada has since held onto the doses for possible concerns with quality control and no shots are currently available to Canadians.

For Johnson & Johnson, the government has agreed to purchase up to 38 million doses of the vaccine from the manufacturer.

While the vaccines have not yet been approved by Health Canada, the government has invested in three additional suppliers of two-dose COVID-19 vaccines: Medicago, Novavax, and Sanofi and GlaxoSmithKline. The government has agreed to purchase up to 76 million doses each of the Medicago and Novavax vaccines and up to 72 million doses of the Sanofi and GlaxoSmithKline vaccine, if they are authorized for use here.