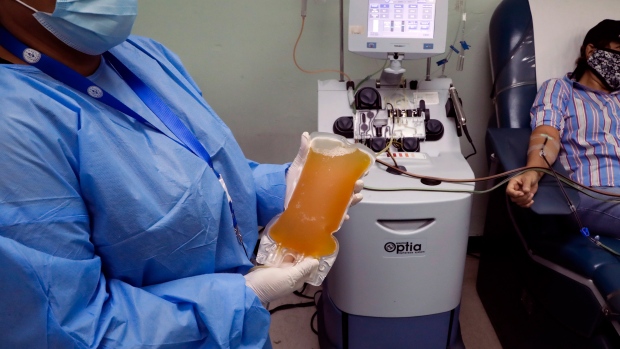 TORONTO — Among the slew of terms you’d likely not heard of before 2020, there’s one that some believe could turn the year around: convalescent plasma.

The phrase has been part of the COVID-19 conversation for months already, but this week it jumped back to the forefront as U.S. President Donald Trump announced an emergency authorization Sunday for the use of convalescent plasma in treating coronavirus patients.

Though the evidence is shaky and incomplete, there is some preliminary research that suggests it could be helpful.

But what is it exactly?

Put simply, convalescent plasma is the blood of a recovered patient. Plasma is the “protein-rich” component of blood, and the word convalescence comes from Latin words for “together” and “to grow strong.” A patient has “convalesced” when they recover from an infection.

It’s not a new medical concept. The use of convalescent plasma predates vaccines, and originated in 1901 when Emil von Behring cured patients of diphtheria by injecting them with antibodies taken from animals that had recovered form the bacterial infection.

Scientists have been discussing convalescent plasma since early in the pandemic. In an April YouTube video, Dana Devine, chief scientist at Canadian Blood Services, explained how it works:

“The reason that we’re interested in that is because when you’ve recovered from an illness, your immune system has developed a set of antibody molecules that are now present in your plasma that weren’t there before,” she said.

Devine added that the plasma is an “interim” measure, not an ongoing treatment, and would most likely be used for people in the early stages of the disease and as a prophylactic or preventative treatment for front-line workers.

Research is still underway regarding the efficacy of convalescent plasma for treating COVID-19. Earlier this month, scientists with the Mayo Clinic reported reduced death rates among some convalescent plasma patients, but the results weren’t gleaned from a formal clinical trial and instead were part of a U.S. Food and Drug Administration program to increase access to the plasma.

Convalescent plasma is currently not available​ in Canada as research continues.