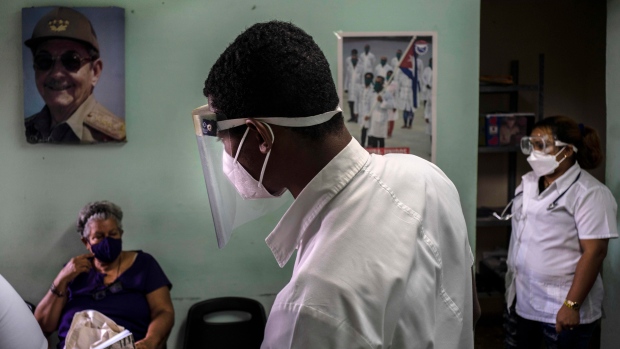 TORONTO — Cuba has begun a mass vaccination campaign centred around their five domestically produced vaccines – some of which are still in in development – in an effort to inoculate the island’s 11 million residents.

The country began its vaccination campaign on Wednesday, earlier than its planned June rollout, choosing not to wait for formal vaccine authorization from the Health Ministry to try to curb a surge in COVID-19 cases.

Other countries like China and Russia have vaccinated their population with domestically produced COVID-19 vaccines before final trials concluded. The U.S., Canada and Europe authorized emergency use for several vaccines based on small samples of early data of Phase 3 trials as well.

In April, Cuba registered 17,362 COVID-19 cases with Havana being the epicentre of the outbreak. The Health Ministry reported more than 1,000 new cases on Wednesday – most likely due to the airports reopening after being closed for eight consecutive months.

The island nation’s state-run pharmaceutical sector is developing five COVID-19 vaccines, and is currently vaccinating their population with two that are in their final Phase 3 trials.

Two vaccines are named “Soberana” and two are dubbed “Abdala.” Another is named “Mambisa” in reference to Cuban independence fighters who fought against the Spanish in the 19th century.

WHAT DO WE KNOW ABOUT CUBA’S VACCINES?

Due to American sanctions, the country began developing its own vaccines for diseases in the ‘80s, and discovered the first immunization against the meningitis-causing meningococcal B bacteria.

Nearly 80 per cent of Cuba’s vaccines are produced domestically.

The “Abdala” COVID-19 vaccine, named after a poem by Cuban revolutionary hero Jose Marti, is in its late-phase trial of more than 48,000 volunteers, but final results have not been published yet.

The “Soberana 2” vaccine, which means “sovereignty,” is also in Phase 3 trials. Favourable results were reported by Cuban health authorities in its Phase 2 stage with few side effects.

Recruitment of more than 43,000 volunteers from ages 19 to 80 to test “Soberana 2” has already begun, according to Cuba’s Finlay vaccine institute.

“Soberana” is a recombinant protein vaccine, which works by recreating the COVID-19 “spikes” on the cell surface and training the immune system to recognise it and fight it. This type of vaccine does not require extreme refrigeration, making it ideal for transport and rollout.

Both the “Abdala” and “Soberana 2” vaccines have been used to inoculate thousands of health-care workers and vulnerable populations across several districts.

Those working in the tourism sector of Varadero were to start being vaccinated by Friday, state media reported, while those aged 60 and above in Havana have been prioritized in the rollout.

Cuban Health Minister Jose Portal said he expects 70 per cent of the population to have received a COVID-19 vaccine by August. By then, BioCubaFarma will have produced enough doses to immunize all of the island’s inhabitants, according to the company’s chief Eduardo Martinez.

Iran and Venezuela are in the midst of clinical trials of Cuba’s “Abdala” vaccine, and several other countries like Bolivia, Mexico and Argentina, have expressed interest in buying or producing them.

With files from Reuters and AFP