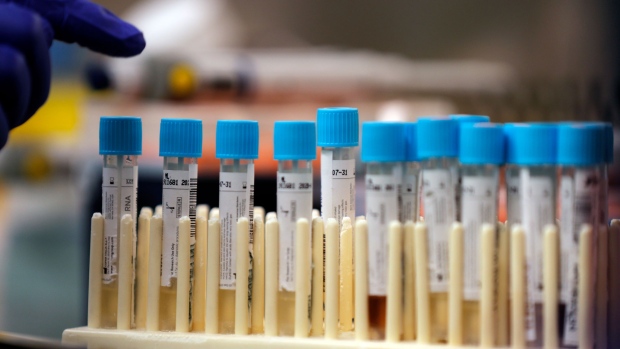 TORONTO — A potential vaccine for the novel coronavirus that has seen promising results in early tests in China is about to start a new round of human trials — this time in Canada.

Here’s what we know about the vaccine Canadians will soon be testing.

WHAT IS THE VACCINE?

It is referred to as Ad5-nCoV and was developed by CanSino Biologics Inc. with the Beijing Institute of Biotechnology. It was one of the first vaccine trials to be approved, gaining permission to carry out trials in China on March 16.

The vaccine is genetically altered from an adenovirus, which are different viruses than coronaviruses. Ad5-nCoV replicates the spike proteins on SARS-CoV-2 — the novel coronavirus that causes the disease known as COVID-19 — which SARS-CoV-2 uses to latch onto human cells.

Theoretically, this means that the human body, once injected with Ad5-nCoV, can start to develop antibodies that will be able to fight SARS-CoV-2.

Health Canada announced on May 16 that it had approved a clinical trial for the vaccine in Canada.

Trials of Ad5-nCoV will be run by the Canadian Center for Vaccinology at Dalhousie University in Halifax.

IS THE VACCINE SAFE FOR HUMANS?

Preliminary results from the trials in China indicate that it is.

A study published May 22 in the Lancet described an early trial of Ad5-nCoV in Wuhan with 108 adults. According to the paper, there were some side effects — including pain when injected, fever, fatigue and headache — but they were described as mild or moderate.

After 28 days of being injected with the vaccine candidate, those in the trial had started to produce antibodies, and there was a response in T-cells, which protect the body from pathogens.

More trials are already underway in China to follow up on these results. Phase two of their trials is placebo-controlled and randomized, and involves 500 adults, including some over the age of 60.

HOW WILL THE CANADIAN TRIALS WORK?

Dr. Scott Halperin, director of the Canadian Center for Vaccinology, told CTV News on May 17 that the trial in Halifax will have three phases.

The first phase, which will require around 100 volunteer participants, will be focused on measuring the vaccine’s effect on the human body itself — essentially, whether there are any side effects that would make it unsafe. The volunteers in this stage will be between 18 and 55 years of age, and will be tracked over a six month period to monitor their progress.

In order to speed up the vaccine testing process, researchers will not wait for the entire six months of the first phase to be over before they begin the second phase, as long as the preliminary data suggests the vaccine is safe for humans.

Although the data from CanSino Biologic’s first trial in China suggests that the vaccine is safe for humans, it doesn’t mean we can skip that step in Canada. By repeating trials in different countries, it adds more evidence of the safety and efficacy of a potential vaccine.

Halperin said that testing a vaccine can usually take years. But in the middle of a pandemic, that’s not something anyone wants to hear. So Halperin’s team will be carrying out tests “in a more accelerated fashion, without sacrificing any safety,” he said.

The second phase of the trial will include around 500 volunteers, and researchers will be looking not only for side effects, but for whether the vaccine promotes the development of antibodies.

In the third and final stage, thousands of volunteers will either take the vaccine or a placebo vaccine in order to test whether the group who took the real vaccine are protected against contracting COVID-19.

WHEN COULD THE PUBLIC RECEIVE THE VACCINE, IF IT WORKS?

We don’t know. Experts say it could still be 12 to 18 months, even moving as fast as researchers are.

But the good news is that CanSino Biologic’s partnership with the National Research Council of Canada (NRC) should guarantee a Canadian supply if the vaccine proves officially viable for mass production, according to Dr. Joanne Langley of the Canadian Center for Vaccinology.

“We’ll likely be producing the vaccine on Canadian soil so it gives us security of supply,” Langley told The Canadian Press May 22.

The federal government announced May 12 that they are putting $44 million into funding to upgrade NRC’s Montreal facilities to ensure that the facility is ready to manufacture vaccines when necessary.

More than 100 pre-clinical trials are underway to test other vaccine possibilites, and a handful of others are already in human trials.