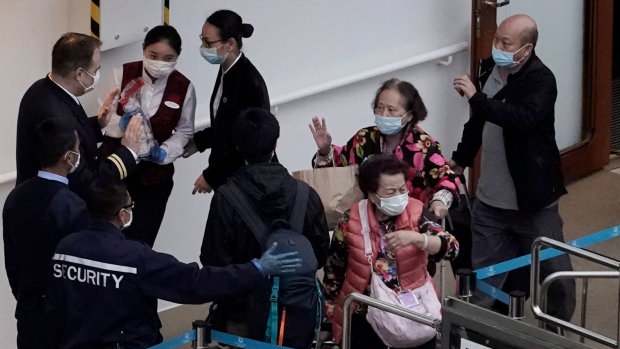 TORONTO — With the number of novel coronavirus cases crossing 40,700 and the number of deaths approaching 1,000, what do these numbers mean and at what point could the World Health Organization declare the outbreak a pandemic?

An outbreak is pretty much the same thing as an epidemic, but it is not the same as a pandemic, said Dr. Isaac Bogoch, an infectious diseases specialist. “Outbreak” and “epidemic” are applied in instances where a higher than normal number of cases of an infection are found in a specific location over a particular period of time.

For an epidemic to become a pandemic, there must be evidence of a global spread and a significantly greater number of cases, he added.

“Are we at a pandemic yet? No,” Bogoch told CTV’s Your Morning. “There’s some arrows pointing in this direction but really, 99 per cent of all these cases are still restricted to China.”

Singapore, Japan, and Thailand have seen some limited spread, but there is no evidence yet of widespread global transmission.

A pandemic would mean that infection control measures are more challenging, especially if a health-care system becomes overwhelmed by the number of new cases.

Are the measures being taken in China working?

Some of the data out of China indicates that the number of new cases is tapering off somewhat. “That is one small arrow pointing in the right direction,” said Bogoch. But it is still unclear whether it is due to the government’s massive quarantine and lockdown efforts or because the country’s health-care system is stretched to capacity, he added.

Do comparisons to SARS make sense?

While there are some similarities between the 2003 SARS outbreak and this one, there are also distinctions between the two. According to official figures, the 2019-nCoV outbreak has killed more people in the three weeks since global health organizations began tracking data than SARS did over the course of the entire outbreak, but it has also infected significantly more people than SARS. Proportionally, SARS killed about 10 to 11 per cent of the 8,096 people it infected, said Bogoch, while this coronavirus has killed one to two per cent of those infected so far.

What is an example of a recent pandemic?

The 2009 H1N1/swine flu pandemic infected as many as 700 million to 1.4 billion people globally, according to one study estimate, but it also had a much lower fatality rate, killing an estimated 150,000 to 575,000 people worldwide, according to the CDC.

Many people often note that the regular flu has already infected, hospitalized, and killed more people this season than the coronavirus outbreak. So why the heightened concern around 2019-nCoV?

Scientists have researched influenza for decades, with studies going back to the 1930s. The risks and knowledge around the flu and what health-care workers can expect are well-established: doctors know when the flu season will wind down, and what the hospitalization and mortality range will likely be, for example.

In contrast, scientists have only known about the 2019-nCoV for a few short weeks. Researchers around the world are still trying to develop models to help predict what to expect from this virus.

“The issue now with this is that there’s a lot of unknowns,” Dr. Anthony Fauci, the Director of the National Institute of Allergy and Infectious Disease, told a White House press briefing at the end of January.

How worried should people outside of China be?

While the outbreak remains extremely serious in China, health experts emphasize that risks continue to be very low in Canada and the United States. Even so, medical officials are still taking precautions and remaining vigilant due to the many unknown factors surrounding the virus.

“These control efforts in China seem to be containing this for now. But I still think that everyone is braced for the potential that this does spread well beyond China. We have to be prepared for that just in case it happens,” said Bogoch.