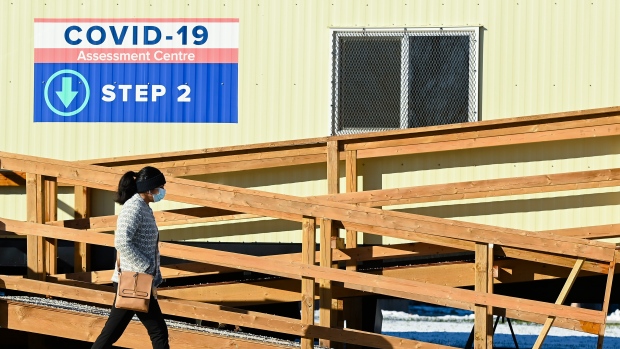 Despite the rapid rise in Omicron cases that peaked in early January, COVID-19 case counts in Canada fell almost as quickly as they rose. But infections and hospital admissions have begun to creep higher over the past few weeks yet again, with all signs now pointing to a sixth wave that is well underway.

As a result, many Canadians may be left wondering how many more of these waves to expect, and exactly when the pandemic will end. Experts, however, say these questions remains tough to answer.

“Unfortunately, I don’t think there’s a satisfying answer in that we don’t really know because it depends on a few variables,” Dr. Susy Hota, medical director for infection prevention and control at the Toronto-based University Health Network, told CTVNews.ca in a phone interview on Wednesday. “I don’t think we can see into the future enough to understand the directions we’re going in for each of those variables.”

Dr. Matthew Oughton, an infectious disease specialist at the Jewish General Hospital and McGill University in Montreal, said it’s reasonable to expect that SARS-CoV-2 won’t completely disappear. Instead, it will likely continue to emerge in waves, he said, particularly among those who remain unvaccinated. It’s also possible that it will develop into a seasonal disease, circulating more frequently between November and March, similar to cold and flu season, Oughton said.

“During that season … that’s when we would tend to see a much higher prevalence of those respiratory infections [and] we may well see something similar to that with SARS-CoV-2,” Oughton told CTVNews.ca on Wednesday in a phone interview. “I don’t think it’s going to be gone, gone.”

This uncertainty around the trajectory of the COVID-19 pandemic also extends to how many booster doses the general population will need to maintain ongoing protection against SARS-CoV-2, Oughton said. Canada’s National Advisory Committee on Immunization (NACI) recently released new guidelines for fourth doses of the COVID-19 vaccine, recommending that those aged 80 and older, as well as those living in long-term care homes or other congregate settings, receive their second booster.

Even with these latest recommendations, it remains unclear how often seniors and other members of the general population will need to continue to be boosted in order to remain protected against the virus, particularly when it comes to infection. However, with studies showing that vaccine protection appears to wane as early as a few months after they are administered, the likelihood of Canadians being advised to get more doses in the future is high, said Matthew Miller, an associate professor at McMaster University’s Michael G. DeGroote Institute for Infectious Disease Research based in Hamilton.

“People should expect that they will continue to need boosters – the question is just at what frequency, and that will be determined by how different variants continue to be, and the severity of illness that they cause,” Miller told CTVNews.ca in a phone interview on Wednesday.

It’s also likely that those who are at higher risk of severe COVID-19 illness can expect to be boosted more frequently than those who are not, Hota said. This includes Canadians who are older in age.

“[In] older people, we know that their immune system functions differently and it’s also really important to protect them because they’re at higher risk of having these severe outcomes in the first place,” Hota said. “So in that group, it seems to make sense that you’d want to ensure that you are providing the best possible protection.”

The difficulty in anticipating the course of the pandemic, as well as how many more doses of the COVID-19 vaccine will be necessary to protect against infection, is due to the possibility of new variants emerging over time, Oughton said. The virus itself is constantly changing and developing new mutations, he said.

“Viruses evolve, and certainly SARS-CoV-2 has shown a fairly impressive ability to evolve over the two years of the pandemic,” said Oughton, who explained it’s likely the world will continue to see the emergence of new variants over time.

The emergence of new variants also has an impact on how effective vaccines are at protecting against the virus, and how long that protection lasts, Oughton said. Current COVID-19 vaccines were designed to target the original strain of SARS-CoV-2, rather than the latest variant of concern, he said. Since Omicron first surfaced in November, recent studies have shown that while protection from vaccines against severe disease caused by Omicron remains significant, they offer less protection against symptomatic infection, particularly when compared to their performance against infection from Delta.

This reduced efficacy is reflected in some of the latest data to surface on the effectiveness of fourth doses of the COVID-19 vaccine, Hota said. A new study conducted in Israel and published in the New England Journal of Medicine suggests that a fourth dose of the Pfizer-BioNTech COVID-19 vaccine offers short-term protection against infection in those aged 60 and older as the Omicron variant dominated. However, protection against severe disease was maintained for at least six weeks, data showed, although researchers were unable to calculate exactly how long that protection lasts due to the short study period.

The reason for this short-lived protection against symptomatic infection stems from the fact that the variant predominantly circulating today is substantially mismatched from the antigen that current COVID-19 vaccines were designed to target, Miller said.

“What booster shots do is transiently increase the amount of antibodies in your body, and those transient increases tend to last somewhere in the range of three months or so, and then they start dropping off again,” Miller said. “[Booster shots] compensate for having relatively poor antibodies to bind to the current Omicron variant with making tons and tons and tons of those antibodies, but in a relatively short period of time.”

Pharmaceutical companies such as Pfizer Inc. and its partner, BioNTech, as well as Moderna Inc., have begun to manufacture vaccines that specifically target the spike protein of the Omicron BA.1 variant. However, data based on clinical trials has yet to be released. Therefore, Oughton said, it’s difficult to speculate right now on how long it will be before a new vaccine formula emerges and is ready for widespread use.

“Until such time as that gets properly developed, studied, and then produced … there may be the occasional indication for subsequent boosters,” Oughton said.

A SHIFT IN APPROACH TO VACCINATION

The fact that a significant portion of the global population remains unvaccinated also has an impact on the course of the pandemic, Oughton said. According to data compiled by CTVNews.ca, about 35 per cent of the world’s population remains unvaccinated against COVID-19, leaving a large amount of people highly vulnerable to infection. As the virus spreads among more people, this presents more opportunities for mutations to develop, therefore resulting in the emergence of new variants, Miller said.

“It’s the number of infections that are happening around the world that are creating the opportunities for new variants to emerge, and the emergence of new variants considerably prolongs our pain,” he said. “The faster we address the issue of infections globally, the quicker [the pandemic] will end.”

While not perfect, current vaccines still offer some level of protection against COVID-19 infection, Oughton said. As more people get vaccinated, the goal is to reduce the number of new infections and therefore, the chances of new variants developing, he said.

“Once we have the vast majority of the population protected with three doses, I think you’ll see much less of an overall effect on that population, but we’re not there yet,” said Oughton. “We still have a long way to go.”

Early on in the pandemic, there was the hope that COVID-19 vaccines would be able to produce sterilizing immunity, Hota explained, which is when vaccination protects a person from being infected with a disease in the first place.

“We put a lot of hope on these vaccines being our exit strategy, but not really talking through or thinking through, publicly, how that might look,” she said. “People may have thought, ‘I need to get my two doses, and this will be over,’ and unfortunately, that’s not the reality we face.”

The goal of COVID-19 vaccines and vaccination programs has changed over the course of the pandemic due to the fact that the virus itself has also changed, Miller said. With the emergence of Omicron, including the BA.2 subvariant, it’s clear that the virus’ spike protein continues to look more and more different from what is targeted by current vaccines. The Omicron variant has also been described as producing milder symptoms among the general population. As a result, the focus of the vaccine program seems to have shifted more towards protection against severe disease rather than infection, said Miller.

“Because the vaccines are doing a great job reducing risk of severe infection in people who are already relatively low risk, there’s less imperative to prevent infection overall,” Miller said. “It’s important to be realistic about the expectations for what vaccines can do and appreciate that ultimately, what we want to do is not get really sick as a result of infection.”

HOW TO NAVIGATE THE PANDEMIC GOING FORWARD

Going forward, Hota said it’s important to recognize the crucial role that vaccines play in protecting against severe COVID-19 outcomes, and urges Canadians to continue to follow the latest recommendations surrounding their use. For those who are eligible but have not yet received their third dose of the COVID-19 vaccine, all experts advise them to do so.

Vaccines, however, are not the only tool that can be used to protect against COVID-19, and it’s important to understand that vaccines won’t entirely eliminate SARS-CoV-2, Hota said. Other measures should also be taken into consideration to help reduce COVID-19 transmission in public spaces, including continuing to wear high-quality masks such as N95s or KN95s indoors, Miller said, citing high amounts of COVID-19 still circulating in many communities across the country.

Hota also urges those who are infected to take the appropriate steps towards self-isolating. This involves waiting until any symptoms have improved before ending the self-isolation period, rather than simply waiting for the recommended number of days to go by, she said. While mandatory isolation periods for adults vary from province to province, those who have received at least two doses of the COVID-19 vaccine are generally expected to self-isolate for at least five days after the onset of symptoms or taking their COVID-19 test. The governments of British Columbia, Alberta, Ontario and Prince Edward Island are requiring residents who are not fully vaccinated to self-isolate for at least 10 days, while other provinces such as Quebec and Manitoba have a five-day self-isolation period regardless of vaccination status.

Finally, Hota advises Canadians to keep an open mind and acknowledge the fact that new data around COVID-19 variants and vaccines will continue to emerge over time.

“We have to be accepting that the science is changing and our knowledge is changing around how to use the vaccines and the best recommendations around the number of boosters [and] how to roll them out according to who’s going to get the most benefit given our current circumstances,” said Hota. “All of that has to be tailored to what we know and understand, which continues to evolve.”