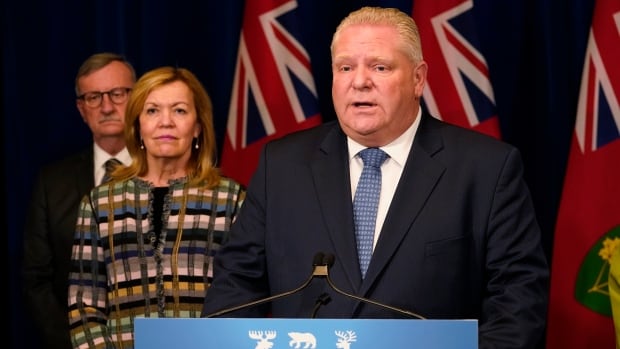 Following an auditor general’s report that found Ontario’s pandemic response is being driven by political staff atop a command structure developed by a U.S. consulting agency, Premier Doug Ford is insisting that medical experts and Ontario’s top doctor are calling the shots.

A tough-talking Ford fired back at Auditor General Bonnie Lysyk Wednesday after her report raised questions about how the government is making crucial decisions on lockdowns, school closures and other measures that are affecting the lives and livelihoods of millions of Ontarians.

“Dr. Williams has been riding shotgun with me from day one.”

That’s in contrast to the findings of Lysyk’s 231-page report.

“The Chief Medical Officer of Health did not lead Ontario’s response to COVID‑19,” the auditor said.

According to Lysyk, the government’s command structure is being led by political staff, not public health experts.

At the top of this structure is the Central Co-ordination Table, which is co-chaired by the government’s cabinet secretary and the premier’s chief of staff. Lysyk writes the table “does not include key public health officials, such as the Chief Medical Officer of Health and key representatives of Public Health Ontario (although they have been invited to attend meetings).”

Ford countered by accusing Lysyk of overstepping her office’s mandate for monitoring financial accountability and questioned her capacity to critique how the government handles a medical emergency.

“I’m really glad the AG just got a health degree and became a doctor over the last year or so,” the premier said sarcastically.

Infectious diseases specialist Dr. Michael Gardam says the report shows that Public Health Ontario has been “sidelined” by the Ford government during the pandemic.

“And so a lot of decisions were made, I would argue, for political reasons,” Gardam told CBC Toronto.

As for the involvement of Ontario’s chief medical officer of health, Gardam believes the position is too close to the government to provide “arms-length” medical guidance.

“It’s very hard for that role to be outspoken and maybe publicly disagree with the government,” Gardam said.

The report also revealed the Ford government developed its command structure by hiring an outside consulting agency. The firm is not named but CBC Toronto has confirmed it was U.S.-based McKinsey & Company.

According to the auditor general’s report, the government hired McKinsey at the outset of the pandemic to create an organizational structure for the pandemic response, at a cost of $1.6 million. McKinsey also assisted the government with its COVID‑19 recovery planning at a cost of $3.2 million. Of that, $942,000 was spent to provide feedback on the child care and school reopening plans, said a spokesperson for the education minister.

Asked about the exact nature of its work with the government, and if its advisers have expertise in public health, McKinsey responded with a statement saying, “While we cannot comment on the details of our work, we can confirm that we supported the government of Ontario for a finite period in 2020.”

“McKinsey, like so many other organizations in Ontario and Canada, is committed to supporting the humanitarian and economic response to the COVID-19 crisis,” the statement said.

Meantime, opposition parties at Queen’s Park were quick to pounce on Ford in the wake of the report’s release.

Sara Singh, the NDP’s deputy leader, said her party was “deeply horrified” by Lysyk’s findings, and she chided the premier for telling citizens that he listens to public health experts.

“Every single day, the premier got up here at one o’clock and reassured Ontarians that he was following the advice of the chief medical officer, when in fact, today, what we learned is that he lied,” Singh told reporters Wednesday.

“And so, when it comes to the appointment of Dr. Williams, we, and I’m sure many Ontarians, have real concerns.”

Ontario Liberal Leader Steven Del Duca was also critical of the way the Ford government structured its pandemic response and he too laid the responsibility at the premier’s feet.

Echoing the critiques in Lysyk’s report, Ontario Green Party Leader Mike Schreiner said the government’s moves have led to “delays and confusion” in the pandemic response.

“The government can’t spin their way out of this report,” Schreiner said.

“It is clear that they spent millions to create a dysfunctional structure, where decisions are being driven by politics and not public health.”