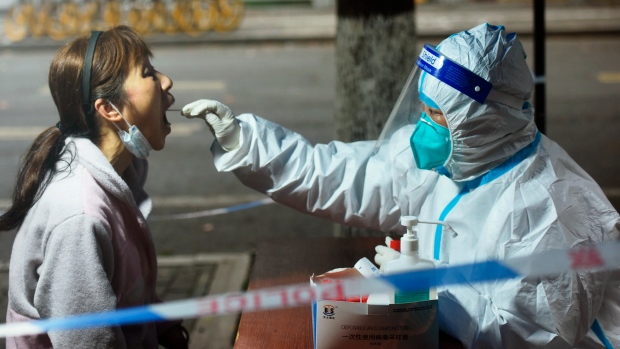 GENEVA — The number of new coronavirus deaths reported worldwide fell by 17% in the last week while COVID-19 infections rose, reversing a decline in cases that first began in January, according to the World Health Organization.

In the UN health agency’s weekly report on the pandemic issued late Tuesday, WHO said there were more than 11 million new COVID-19 infections last week – about an 8% rise – and 43,000 new deaths. The number of COVID-19 deaths globally has been dropping for the past three weeks.

The biggest increase in cases were seen in the Western Pacific and Africa, where infections rose by 29% and 12% respectively. Elsewhere, cases dropped by more than 20% in the Middle East, Southeast Asia and the Americas. In Europe, cases inched up by about 2%.

WHO said those numbers “should be interpreted with caution.” It noted that many countries are changing their COVID-19 testing strategies as they exit the acute phase of the pandemic, and are testing far less than previously, meaning that many new cases are going undetected.

In recent weeks, countries including Sweden and the U.K. have announced plans to drop widespread testing for COVID-19, saying the massive investment is no longer worth the effort. Still, infections, hospitalizations and deaths have increased slightly in Britain, driven by the more infectious omicron subvariant BA.2. Another contributing factor has been the suspension of nearly all COVID-19 protocols as more people abandon masks and gather in larger numbers.

WHO noted that although COVID-19 has been dropping in numerous regions, the Western Pacific has seen rising numbers since December.

China banned most people from leaving a coronavirus-hit northeastern province and mobilized military reservists Monday, as the fast-spreading “stealth omicron” variant fuels the country’s biggest outbreak since the start of the pandemic two years ago. Officials also locked down the southern city of Shenzhen, which has 17.5 million people and is a major tech and finance hub that borders

Hong Kong — which itself has reported some of the highest COVID-19 death rates recently.