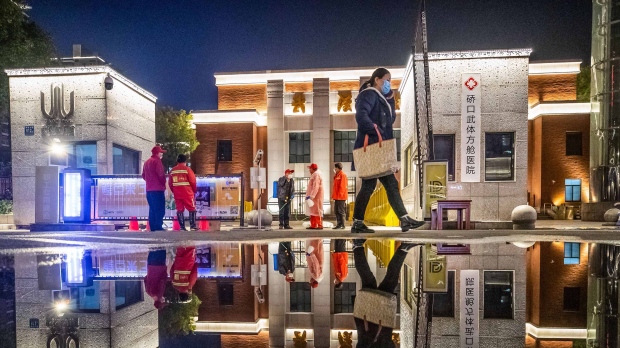 Countries worldwide are preparing for the possibility of public health emergencies related to the novel coronavirus, as the World Health Organization warned a shortage of protective equipment is hampering the response to the outbreak.

The virus has infected more than 92,800 people and killed at least 3,200 since it was first identified in the Chinese city of Wuhan in December last year. It has now spread to more than 75 countries and territories, with self-sustaining clusters forming in South Korea, Japan, parts of Europe, Iran and the United States.

At a news briefing Tuesday, WHO Director-General Tedros Adhanom Ghebreyesus said that each month, the organization estimates that about 89 million medical masks, 76 million examination gloves and 1.6 million goggles will be required globally for health care workers to respond to the outbreak.

“Shortages are leaving doctors, nurses and other front line health care workers dangerously ill-equipped,” said Ghebreyesus. “The WHO has shipped nearly half a million sets of personal protective equipment to 27 countries, but supplies are rapidly depleting.”

The dire warning comes as China announced a further drop in new cases, raising hopes that the outbreak is beginning to level off in the hard-hit country. Though the vast majority of the total number of confirmed cases and deaths are inside of China, the number of new daily infections outside of the country now exceeds those inside.

The Chinese National Health Commission (NHC) said that 115 infections and 37 deaths related to the coronavirus were confirmed Tuesday in Hubei, of which Wuhan is the provincial capital. The rest of mainland China, excluding Hubei, saw only one death and four infections, the NHC reported, bringing the total number of coronavirus cases in the country to at least 2,981 deaths and 80,270 cases.

To date, nearly 50,000 patients have recovered and been discharged from hospital, the NHC reported.

The WHO has said it is working with governments, manufacturers and the Pandemic Supply Chain Network to boost production and secure supplies for at-risk countries. However, it is predicted globally supplies will need to be increased by 40% to meet demand.

Infections in Iran, one of the most critically affected countries, have now surged to more than 2,300 cases — which includes about 8% of the country’s parliament — and 77 deaths, including an adviser to Supreme Leader Ayatollah Ali Khamenei.

South Korea confirmed one new death and 516 more cases of the novel coronavirus Tuesday, bringing the national death toll to 32 and the total number of confirmed cases to 5,328, according to the South Korean Centers for Disease Control and Prevention (KCDC). Among the 516 new cases, 405 are from the city of Daegu, where the outbreak has been concentrated.

And in Europe, authorities are taking early precautions to stop potential spreading. Several governments are preventing large gatherings of people in order to curb community transmission, and closing public spaces like the Louvre in Paris and Milan’s La Scala opera house.

In Italy, at least 79 people have been killed by the virus and more than 2,500 have been infected. Most of the cases have been reported in the country’s north.

The coronavirus and its knock-on effects have rattled markets worldwide, with investors concerned that measures aimed to stop the virus’ spread could stop business from functioning as normal.

The World Bank pledged to give $12 billion to more than 60 countries affected by the virus, while the United States and Europe are also taking steps to combat the virus’ potential economic effects. The U.S. Federal Reserve slashed interest rates by half a percentage point on Tuesday, a bold attempt to give the US economy a jolt in the face of concerns about the coronavirus outbreak.

It was the first unscheduled, emergency rate cut since 2008. But although the fundamentals of the US economy remain strong, “the coronavirus poses evolving risks to economic activity,” the central bank said in a statement.

Finance officials from the G7 major economies issued a joint statement that committed them to using “all appropriate policy tools to achieve strong, sustainable growth” but stopped short of outlining specific steps.

The Organization for Economic Cooperation and Development warned Monday that global economic growth could be cut in half this year if the outbreak continues to spread. It called for an immediate response to contain the outbreak, recommending that governments increase spending and central banks implement policies to help cushion the blow from the virus.

Private companies are also preparing and moving ahead cautiously. Google canceled its annual developer’s conference, the tech giant’s biggest event of the year, and JPMorgan Chase asked thousands of its employees to work from home for a day to test its own contingency plans, a person familiar with the matter told CNN Business.

The U.S. has now identified at least 126 coronavirus cases, which include 45 Americans who were repatriated from the Diamond Princess Cruise ship in Japan and three from Wuhan, and another 78 detected and tested in the United States through the U.S. public health systems. Those numbers include presumptive positive cases that tested positive in public health labs and are pending confirmation from the US Centers for Disease Control.

Nine people have died of the virus in the US, all in the state of Washington. Many of the state’s 27 reported infections are believed to be connected to a nursing home near Seattle. California is the next hardest hit state, with 27 cases and no deaths.

Vice President Mike Pence has also advised Americans that the virus does not pose a major threat to them.

“Let’s be clear: The risk to the American people of the coronavirus remains low, according to all of the experts that we are working with across the government,” Pence said.