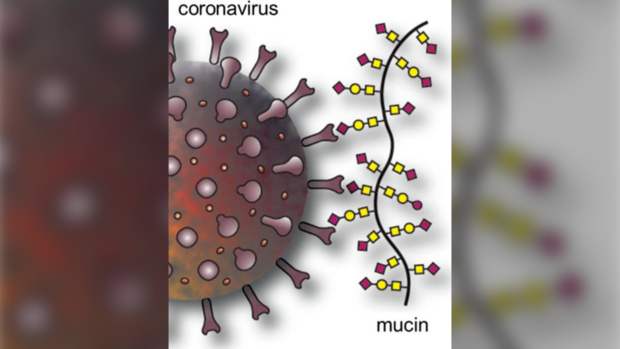 Even though COVID-19 can survive on surfaces, a new study suggests the reason widespread cases connected to surface transmission haven’t materialized might be due to one unexpected barrier: mucus.

Published in the journal ACS Central Science in February, the study posits that proteins covered in sugar which make up the bulk of mucus might be able to bind to the particles of a coronavirus, preventing them from breaking through the mucus to infect human cells.

Researchers did not use SARS-CoV-2 particles, but instead used a similar human coronavirus called OC43 which also binds to human cells through its spike protein.

At the start of the pandemic when scientists were less clear on how the virus was transmitted, surfaces were a huge source of worry, with people scrambling to buy wipes to disinfect anything and everything that entered their home.

Numerous studies even found that the virus could remain active on surfaces for hours after an infected person first coughed or sneezed on the surface, fuelling these fears.

It’s now understood that the virus is transmitted almost entirely through tiny airborne particles as well as through larger droplets expelled when sneezing or coughing.

But why is it that surface transmission predictions didn’t come true if the virus truly is able to linger on surfaces?

Surface transmission was already less likely due to the sequence of events that has to take place in order for it to work: an infected person has to deposit virus particles on a surface which is then touched by another person, who then has to bring their hand to their mouth, nose or eyes in order for the virus to get into their body.

But apart from that, researchers noticed that one of the limitations of the majority of laboratory studies measuring the lifespan of COVID-19 virus particles on surfaces is that lab studies usually used synthetic buffers or growth mediums to deposit the virus on the surfaces.

In real life, SARS-CoV-2 is coated in mucus when it leaves an infected person’s body through a sneeze or a cough.

In order for virus particles expelled from the body in a sneeze or cough to infect another person, they have to penetrate the mucus layer around them so they can replicate and bind to human cells.

Researchers sought to investigate the properties of mucus to see if it could partially explain the unlikeliness of surface transmission.

They focused on something called mucins — glycoproteins that make up most of mucus.

For the virus they tested, they chose the coronavirus OC43, which originated in cows before it crossed over to humans, because the particles bind in a similar fashion as SARS-CoV-2 and it was deemed safer to work with.

Researchers created different solutions to test surface transmission, suspending viral particles in both a phosphate buffered saline and in a solution with a concentration of mucins that would approximate the range found in mucus naturally. Droplets of these solutions were placed on a plastic surface and allowed to dry entirely.

Around five minutes later, researchers rehydrated the droplets and assessed their ability to infect cells by introducing them to tissue culture in the lab setting. Researchers measured infection in the tissue culture by whether or not there were morphological changes in the cells.

While researchers found that the dried droplets on the plastic surface retained a high degree of infectiousness even after they dried, it was a different story when it came to whether or not they could effectively infect cells.

The study found a “stark contrast between infectivities of CoV [particles on surfaces] prepared with and without mucin,” with a visible difference between the tissue culture samples.

“Clearly, the presence of mucin in these simulated cough or sneeze droplets has a significant effect on the ability of the CoVs to later infect cells,” the study stated.

When researchers looked closely at the dried droplets under a microscope, they found that the mucins shifted to the edge of the droplet as it dried, in almost a “coffee ring” effect, and that the OC43 particles had been drawn to the edge as well.

Researchers believe that these results could mean that SARS-CoV-2, which also binds through a spike protein, like OC43, could also have its infectivity affected by mucins in this way.

Not every person has the same proportion of these sugar molecules, or glycoproteins, in their mucus, based on diet and diseases such as lung cancer, and researchers suspect that this could play into a person’s level of vulnerability to COVID-19.

Researchers also briefly tested whether the mucins could prevent transmission when they hadn’t dried on a surface first, simulating direct transmission by introducing wet solutions to the tissue culture.

They found that mucins also inhibited some transmission in the mock direct contact experiment, but that the protective effect was much stronger in the samples that had dried on a surface first.

“We speculate that in drying droplets the localized concentration of mucin will become very high, improving binding between mucin and virus,” researchers stated.

Researchers acknowledged that more research needs to be done on this topic to truly understand how much mucus plays into infection pathways.