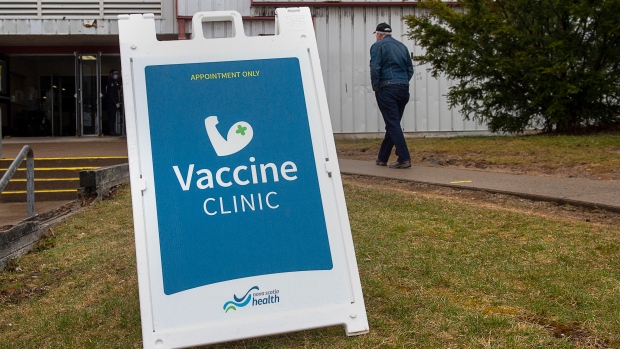 TORONTO — An Ottawa-designed immunization booking system is gaining praise in Nova Scotia for its simplicity and effectiveness compared to the COVID-19 vaccine rollout in other provinces.

CANImmunize, the company behind the site, caught the attention of N.S. public health authorities in September, after it created a clinic management system for a flu vaccine campaign at Elisabeth Bruyere Hospital in Ottawa.

CANImmunize’s Chief Operating Officer Katherine Atkinson told CTV’s Your Morning on Thursday that the vaccine system in N.S. has been a success because it is an “end-to-end system.”

“It’s a single system so everything’s happening in one site, which makes it a lot easier to make sure that you’ve found your appointments off the bat,” Atkinson said.

“Similarly, the government’s able to see everything as it’s occurring in that system so they know where they can allocate extra doses to or have that real time feedback to make it easier to run such a really complicated campaign,” she added.

Atkinson explained that individuals are able to book their COVID-19 vaccine appointment, fill out their forms in advance, and submit a COVID-19 screening, all in the one online portal.

“From there, they actually document the vaccine in the exact same system and then you receive a digital immunization record when you’re leaving the clinic,” Atkinson said.

She says CANImmunize was able to co-design the vaccine system with Nova Scotia Health from the pilot project to “directly address the challenges of the COVID rollout.”

However, Atkinson acknowledged that it hasn’t been trouble-free.

“There have been a lot of challenges and our system certainly hasn’t been perfect, but the partnership with public health and the ability to work together, and listen to the feedback and make those changes in real time is I think why it’s been so well received,” Atkinson said.

After its success in N.S., Yukon began using CANImmunize’s booking system, and Atkinson says the company is in talks with Prince Edward Island’s health authority to implement it there.

While CANImmunize is an Ottawa-based company with about 10 years experience in vaccine systems, Atkinson said the company was not approached by the Ontario government for its COVID-19 vaccine rollout.

Atkinson said CANImmunize has worked for years with local public health units in Ontario including those in Ottawa, Toronto and Prince Edward County on child immunization records for schools, but would welcome the opportunity to work with the Ontario government in the future.

“Not sure what could have occurred in the COVID-19 rollout. It’s a really fast moving process and we’re looking forward to ways that we might be able to come and bring this technology back and help with addressing any gaps that currently exist,” Atkinson said.

Atkinson said the company anticipates that COVID-19 vaccine records will play a “really important role” as economies reopen across Canada and in a post-pandemic world for years to come. She said countries including Israel and parts of the European Union have already used digital immunization records to hold mass events.

“Having proof of immunization or an immunization certificate can definitely assist with allowing certain events to go forward that we’ve all been missing,” Atkinson said.

As Canadians anxiously await their chance vaccinated, Atkinson said CANImmunize is looking ahead as to what it can do better in a post-pandemic world that may be reliant on digital vaccine certificates.

“This system we have in Nova Scotia now is pretty new, it’s really been built off of addressing the current challenges and I think we’re ready to continue to adapt and use the tools at our disposal to address whatever’s coming next,” Atkinson said.