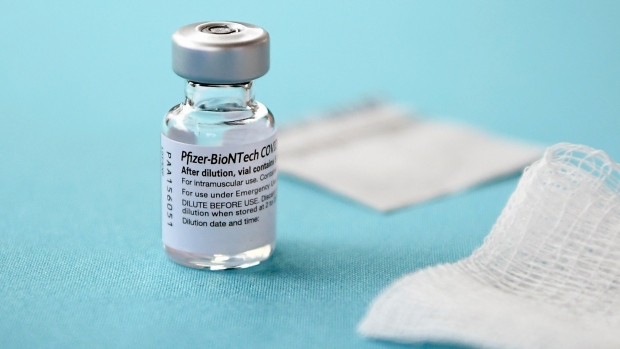 TORONTO — The mRNA technology used for the Pfizer-BioNTech and Moderna vaccines has been hailed as a medical breakthrough in the fight against COVID-19.

The vaccines’ high efficacy against SARS-CoV-2, the virus which causes COVID-19, their safety in clinical trials, and how quickly they were produced has generated much excitement within the scientific community.

And while the technology is hardly new – it’s been decades in the making – the pandemic fast-tracked its development thanks to increased interest and funding, and accelerated regulatory approvals.

With the distribution of mRNA COVID-19 vaccines well underway, scientists are already looking ahead to the technology’s potential to prevent and treat other deadly diseases, such as cancer, malaria, influenza, HIV, Parkinson’s disease, and the list goes on.

WHY mRNA TECHNOLOGY IS DIFFERENT

Traditional vaccines, such as the seasonal flu shot, work by injecting the patient with weakened or inactivated parts of the actual pathogen or virus, thus exposing their immune system to it. This allows the immune system to create antibodies that can recognize and fight off that same pathogen if it encounters it again.

With mRNA vaccines, on the other hand, there is no actual virus being injected into the individual. Instead, these types of vaccines teach the body’s cells how to make the necessary antibodies to trigger an immune response.

Messenger ribonucleic acid (mRNA) are genetic instructions that tell the body’s cells which proteins to make. These proteins are needed for numerous cellular functions inside the body, including for energy and immune defence.

For the COVID-19 vaccines, scientists developed synthetic mRNA in a lab that instructs cells to produce the distinctive spike protein from the SARS-CoV-2 virus. The immune system then targets and destroys these foreign spike proteins. If the body encounters the real virus at a later time, the body’s immune system will already be prepared to fend it off again.

CANCER, MALARIA, INFLUENZA AND BEYOND

While the mRNA-based vaccines have proven effective at defending against the SARS-CoV-2 spike protein, some scientists are optimistic the technology doesn’t have to stop there.

In fact, research has already begun to find other applications for mRNA technology to prevent against some of the world’s deadliest diseases.

Dr. Van Karlyle Morris, a gastrointestinal oncologist at the University of Texas MD Anderson Cancer Center, is part of a team of researchers testing mRNA technology for use in preventing the return of colorectal cancer.

For the Phase 2 clinical trials, which have research support from BioNTech, Morris said they’re using mRNA technology to treat cancer that may still be present in the body.

“With COVID vaccines, we’re trying to prevent something that’s not there,” he said during a telephone interview with CTVNews.ca on Wednesday. “In the context of cancer, we’re actually using the mRNA technology to treat something which still may be there.”

To do this, the researchers are following high-risk patients with Stage 2 or Stage 3 colorectal cancer who have had a tumour removed. The tissue from the tumour is sent off to a specialized lab where they study the tumour’s genetic mutations, which is what fuels cancer growth, and identify up to 20 of the most common mutations.

The team then creates a personalized mRNA vaccine based on the tumour’s specific genetic mutations, which is given to the patient.

Because mRNA vaccines are so quick to make, Morris said they can create personalized cancer vaccines that target specific genetic mutations and edit them as they go along.

“The ability to personalize and the flexibility of the technology to adapt to a given patient’s specific needs in the setting of cancer or quickly adapt to the needs for infectious diseases, as you’ve seen in COVID-19, I think is something that’s unprecedented in medicine thus far and it has implications to really transform how we approach all types of medical conditions,” he said.

Dr. Richard Bucala, a professor of medicine, pathology, and epidemiology and public health at the Yale School of Medicine, is also working on a RNA-based vaccine of his own to be used in the fight against malaria.

Malaria, which is the second-leading cause of infectious disease death in the world, is caused by a parasite that is transmitted by mosquitoes when they bite, Bucala said.

The RNA vaccine Bucala and his team are developing would target a specific parasite protein called MIF, which kills the immune system’s memory cells, thus preventing it from remembering the parasite.

This particular vaccine slightly differs from mRNA vaccines in that it uses self-amplifying RNA (saRNA), which Bucala describes as the “next generation” of RNA vaccines.

Unlike mRNA vaccines, like those developed by Pfizer and Moderna, which require a large amount of mRNA to be injected up front, saRNA only requires a small amount at the beginning because it’s designed to self-replicate inside the body’s cells.

“You inject it once, and that RNA is replicated for six to eight weeks,” Bucala explained during a telephone interview with CTVNews.ca last week. “It makes it much cheaper, much easier to produce, much easier to deliver, especially in the developing world.”

This last point is important because Bucala said it’s very difficult to develop vaccines for developing countries, which is where malaria is most widespread.

While Bucala and his colleagues have been working on this vaccine for years, Bucala said the success of the mRNA vaccines for COVID-19 has made it easier for other research, like his own, to attract interest and funding.

“The unforeseen benefit of the tragedy of COVID-19 is that RNA now is kind of accepted and opens opportunities for this vaccine approach for other diseases, such as malaria,” Bucala said.

In addition to malaria and cancer, scientists say there is potential for RNA technology to be used in vaccines for the seasonal flu, HIV, Parkinson’s disease, and multiple sclerosis (MS).

Both Pfizer and Moderna have said they’re planning to use the technology to develop a vaccine against influenza. Moderna recently announced that it was developing mRNA vaccine candidates for the seasonal flu, HIV, and the Nipah virus, following the success of its COVID-19 vaccine.

BioNTech, which partnered with Pfizer for the COVID-19 vaccine, is already researching how mRNA technology might be used to treat autoimmune diseases, such as MS, in mouse trials.

“It’s very, very early, obviously, in this technology, but the potential for this to affect patients with autoimmune diseases as well is I think, you know, extraordinary,” Morris said.

While much of this research has not yet reached the stage of human clinical trials, the hope is that there will be fewer hurdles to get there now that mRNA vaccines have been introduced to the world on a large scale.

Bucala said the emergency circumstances of the COVID-19 pandemic provided an opportunity to try these new vaccines.

“Because it’s trial and error, you don’t know that you failed until you’re at the very end, after human clinical trials. And now with the RNA technology, which is less expensive and easier, and regulatory agencies being more on board, I think it opens business opportunities,” Bucala said. “It’s very much a good news story.”