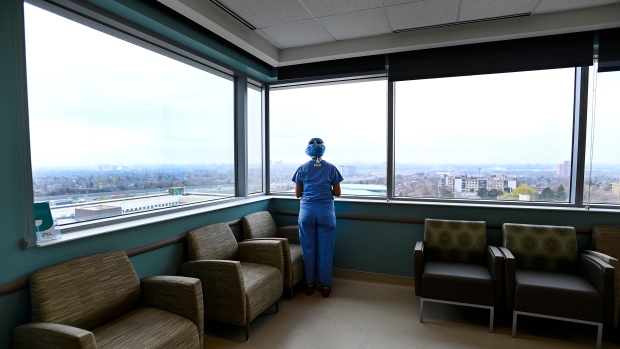 TORONTO — Ontario’s call for other provinces to send extra nurses is “likely” to go unanswered because they face their own shortages, the Canadian Nurses Association president said.

“I think it will be difficult for many of the provinces to be able to spare people to send to Ontario,” Tim Guest told CTV’s Your Morning on Monday from Halifax.

As severely ill COVID-19 patients are being hospitalized in Ontario in higher numbers than ever, leaders are desperate to bring in nurses to deal with the record-breaking third wave that threatens to overrun the province’s health-care system.

Guest said the situation is dire, as some COVID-19 patients need extra care.

“Critical care nurses are telling us that some of these patients are so sick that they really require the care of two or three nurses. Yet, some nurses are looking after three of them.”

So far, Newfoundland and Labrador has publicly agreed to help. But Guest said Atlantic provinces such as New Brunswick and Prince Edward Island are in a tough spot, as they have their own nursing shortages. Meanwhile, Alberta and Saskatchewan, which are feeling the strain of high COVID-19 case counts, said they were unable to provide backup to Ontario hospitals.

During Ontario’s third wave, front-line workers have said there isn’t enough supply in COVID-19 hot spots, and that staffing shortages are taking an emotional toll on health-care personnel, with managers seeing a spike in time-off requests.

The government estimates that Ontario might have a gap in staffing of around 4,145 nurses in the hospital sector alone over the next four months.

Guest said that for the past decade, there have been a number of vacancies in critical care, emergency departments, rural and remote areas of Canada. And, he said, a failure to adequately plan and staff for retiring baby boomers needing care has only compounded the issue.

To deal with the current shortage in Ontario, there are attempts to increase capacity by transferring patients to other hospitals, cancelling non-essential procedures and setting up field hospitals to expand capacity.

He said it’s likely that nurses do want to help, but there are barriers in place. He called for the removal or relaxing of regulations preventing them from moving between provinces, at least until the pandemic is over.

“I think we need to look at employers and unions to look at what current collective agreement barriers might be preventing some nurses — that have critical-care experience — from participating in the pandemic,” Guest said.

But he cautioned that more nurses might not be the ultimate solution either.

Guest said that “what we need to be very cautious about is carrying forward with this idea that you can just move a nurse from one place to another… and expect they’ll be able to function.” He explained that nurses sometimes develop specialized skills tailored to a specific area and might not be able to always transfer those skills.

Those with critical-care certificates are desperately needed in Ontario, but Guest said they’re in short supply across the country. So hospital administrators have also been scrambling to redeploy nurses from other units, as well as nursing students to help staff overburdened ICU units.

Guest said there needs to be stronger incentive to urge “nurses to come out of retirement if they have critical-care skills,” and rehire retired nurses who can give reprieve to critical-care nurses who’ve been temporarily filling other roles.