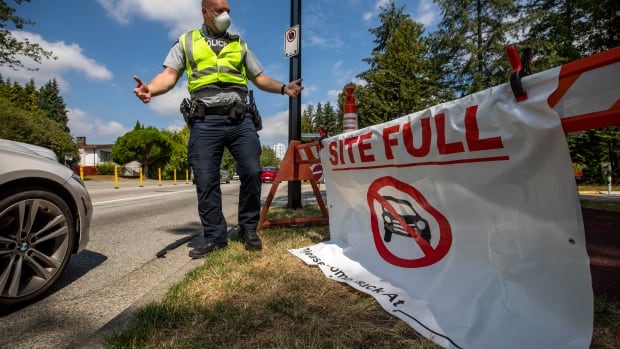 A key COVID-19 statistic that you won’t hear about during B.C.’s daily health briefings could indicate residents are slowing transmission of the virus.

The number of COVID-19 tests completed in a day divided by the number of cases detected is called the positivity rate — a number that was as high as seven per cent in the early days of the pandemic, and less than one per cent for most of June.

The positivity rate can be determined a few hours after Provincial Health Officer Dr. Bonnie Henry holds one of her regular news conferences or releases a written statement. That’s when the daily testing numbers are reported.

Over the last week, that number has declined consistently to below two per cent — a level not seen on a regular basis since early July.

And while provincial officials aren’t planning to release the number of daily tests at 3 p.m. anytime soon, it’s still a number they weigh.

“Per cent positive is something we watch,” said Henry. “It’s one of those metrics that if it’s above five per cent … that tells us there’s transmission in the community that is concerning.”

Because testing in B.C. continues to go up — the average weekly number has doubled since early August — the daily number of new cases hasn’t been decreasing.

In addition, the number of tests done a day vacillates wildly, with about 2,500 more tests done on slow days (typically Mondays and Tuesdays) than busy days (typically Wednesday to Saturday) when about 8,000 tests are now completed.

That makes tracking “success” based on the number of daily new cases difficult — but experts say there have been encouraging signs in B.C.’s containment of the virus since nightclubs and banquet halls were shut down after Labour Day.

“We can never really know exactly why change happens, but it does look like … there’s signs of a downturn, which I think is great,” said Simon Fraser University researcher Caroline Colijn, who studies the mathematics of infections.

Colijn says the positivity rate doesn’t show everything, and could be misleading if the province was inefficiently testing thousands of people who didn’t have symptoms.

At the same time, the lower rate could indicate that B.C.’s surge of cases has subsided, at least temporarily. And it shows community transmission is quite low.

“It doesn’t seem to be continuing that exponential growth trend. So I think there could be signs of slowing down, which would be amazing.”

No school effect — yet

B.C.’s plateau comes as cases in Ontario and Quebec are drastically increasing once again, but that’s not a surprise to some central Canadian epidemiologists.

“We have had a baseline simmering COVID situation all summer, which is something B.C. really didn’t have, so the embers were all too ready to break out into a major fire again with a little carelessness,” said Colin Furness, a professor at the University of Toronto’s Dalla Lana School of Public Health.

However, both Furness and Colijn say it’s too early to determine the effect of schools being back in session.

“It does mean that we didn’t get super unlucky on the first day [of school] … and that’s great. It doesn’t mean we will always be lucky,” said Colijn.

And ultimately, there’s no guarantee that the relative success B.C. has had in the last few weeks can be maintained for the next few months, said Colijn.

“We should continue to be vigilant because it’s the complacency and the, ‘Oh, it’s gone, it’s been a wave and it’s gone away’ that leads us to get together indoors again … and  that causes the kind of resurgence that we’ve seen.”