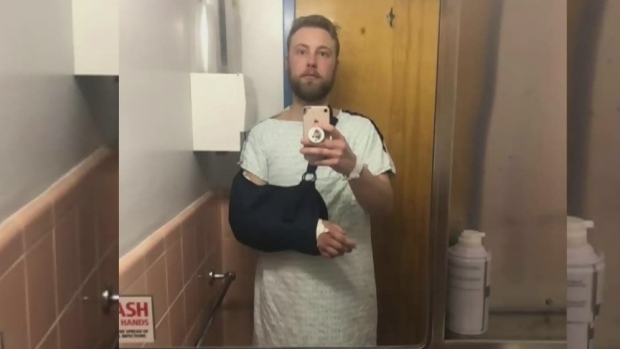 WINNIPEG — A Winnipeg man is speaking out after waiting six days in hospital to have surgery on his broken arm.

Ethan Krushel suffered the injury in a car crash.  The accident left him bed-ridden and in pain.

“My arm just kind of folded in half and flopped.  I felt the bones clicking and it really hurt, ” Krushel told CTV News.

His frustrations arose when surgery to repair his arm was repeatedly delayed.

Krushel spend the next six days waiting in the Health Sciences Centre for what doctors expected would be a one-to-two hour surgery.

“The whole time you’re waiting, you’re in pretty excruciating pain so they’re giving you drugs the whole time and what I find really scary is the whole dependency thing,” Krushel said.

A statement from Shared Health, the organization which runs HSC says in part, “Surgical schedules are managed and prioritized based on the severity and acuity of individual patients.  As Manitoba’s major trauma centre, this means that on occasion less urgent cases must be delayed if more serious patients require immediate surgery.”

The Manitoba Nurses’ Union says incident like this are unfortunate and are a symptom of the current health care system.

“The government has to admit healthcre is in a mess right now and it has to do with the cuts, closures and consolidations, ” said MNU president Darlene Jackson.

Krushel says his surgery went well. He hopes to recover quickly so he can play guitar in time for a show at the end of the month.

“I’ve got a show at the Pyramid on the 21st so I hope I can get myself together a little bit for that.”

No matter how fast the recovery, Krushel says he will never get his full range of motion back.