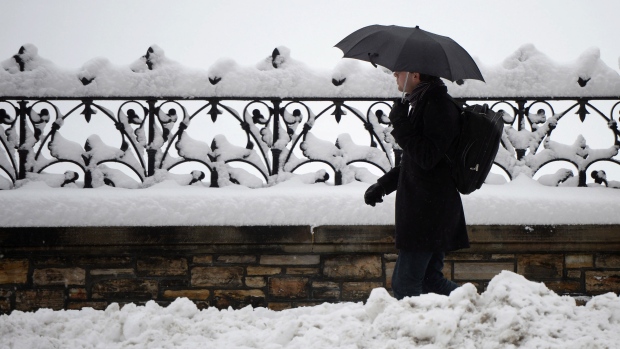 TORONTO — The single biggest way Canadians are coping with COVID-19 is by getting outside, according to a new national mental heath survey, but a frigid winter forecast could put that strategy on ice.

A new poll released Wednesday by Mental Health Research Canada (MHRC) surveyed more than 2,000 Canadians and found that 39 per cent of respondents reported spending time outside had a positive effect on their mental health.

The next most helpful activity was reading, with 29 per cent of respondents finding it beneficial, followed by entertainment such as watching television or listening to music (21 per cent) and physical exercise (17 per cent).

The reason getting outdoors tops the list may be because it gives people the opportunity to safely connect with friends or family in a physically distanced environment, said Dr. David Dozois, a clinical psychologist and psychology professor at Western University who helped design the survey.

The simple act of getting up and doing something, rather than sitting on the couch, could also provide a boost, Dozois said.

“We need to have a certain amount of activity in our day of things that give us pleasure. That’s so much easier to do when you can go outside,” he said.

Psychologists have long worried about the effects of COVID-19 on mental health, particularly as the days get colder and Canadians who are already isolated — particularly the elderly — spend more time alone. Even in normal years, winter can negatively impact an individual’s mental wellbeing and in some cases lead to seasonal affective disorder.

This winter could be even colder and wetter than normal thanks to the arrival of La Nina, which is characterized by cooler-than-average sea temperatures in the eastern and central Pacific Ocean. Forecasters say La Nina will likely affect British Columbia, the Prairies, Ontario, and Quebec by causing heavy snow and chillier temperatures.

But staying cooped inside isn’t going to help, Dozois said. He compared going outside to eating healthy: you may not crave it, but you’ll feel better after you do it.

“Winter will be cold and dark, but there are ways to embrace that,” said Dozois, who bought cross-country skis over the summer in anticipation of the winter.

One possible solution is to adopt the Norwegian practice of friluftsliv — pronounced “free-loofts-liv” — a cultural philosophy that rejects the idea of “bad weather” and embraces winter. Friluftsliv translates to “open-air living” and proponents recommend dressing for the cold and heading outdoors to connect with nature, be it through skiing, skating or a casual walk.

“It’s about recognizing that, if I push myself to go outside, I’m going to feel better,” he said.

Already, Canadians appear to be investing in outdoor activities. Sales of outdoor heaters, skis, snowboards, hot tubs and snowshoes have spiked, and ski resorts have reported higher than normal sales for season passes.

The survey also found that the positive impacts of Canadians’ coping strategies have dwindled since the beginning of the pandemic, suggesting that some Canadians are finding it harder to manage stress. For instance, while 39 per cent of Canadians found watching TV or movies helpful at the start of the pandemic, that number was cut in half in the most recent survey, conducted in late October.

“Sometimes distractions in the short-term can be helpful, but in the long term it’s not a helpful thing,” Dozois said.

The new survey offered a broader look at how Canadians’ mental health has evolved since the pandemic was declared in March. Self-reported anxiety and depression rose dramatically at the start of the pandemic, but researchers say the rapid rise in cases during the second wave has not led to a change in mental health concerns, which remain steady.

Even so, levels of anxiety are four times higher than pre-pandemic levels, and Canadians are reporting depression at twice the previous rate.

Canadians who are not adhering to COVID-19 regulations appear to have a higher degree of negative mental health connected to economic consequences of COVID-19, such as the loss of wages or a job. Fifty-six per cent of those individuals reported a worse mental health status, compared with the overall response of 44 per cent.

Similar reports on mental health have raised alarm bells. A report published this week by the Quebec-based Early Childhood Observatory surveyed 501 Quebecers and found that 68 per cent of parents found parenting more stressful during the pandemic, with 51 per cent of respondents reporting higher stress levels.

Lower income levels were also linked to stress, with high stress levels reaching 69 per cent among parents whose household income before taxes was under $40,000.

Dozois said one helpful way to cope with the pandemic is by adjusting our language. Rather than reiterating “the new normal” of life under COVID-19, he suggested calling it “the temporary normal,” a term he borrowed from his fiancee, also a psychologist.

And while the pandemic has led to an alarming spike in anxiety and depression, he said it’s promising to see Canadians actively seeking out ways to manage.

“We are resilient, that’s what this poll showed. The vast majority of Canadians are coping and pivoting. You think of how many people are parenting and doing their jobs. It’s incredible what people can adapt to,” he said. ​