Standing in a BMW showroom full of beautiful new automobiles, the man in the military uniform seemed unimpressed.

“Where are your masks?” he demanded of the worried-looking car salesman. The hand sanitizer for customers was missing from the front of the store too, he continued, berating him.

The penalty for the dealership on Zorge Street in northwest Moscow could be up to $10,000 Cdn. It’s one of more than 15,000 fines handed out to businesses, along with another 100,000 fines imposed on individuals by Moscow’s COVID bylaw inspectors since May.

For businesses alone, the fines amount to the equivalent of $15 million Canadian — though it’s unclear just how much of that actually gets paid.

With the city of 13 million bearing the brunt of a worrisome new outbreak of coronavirus, the Putin government has resisted a new lockdown but instead stressed the need for Russians to do what thus far they have been reluctant to do: restrict their movements, stay physically distanced and pay attention to a strict regime of anti-COVID-19 cleanliness.

The heavy enforcement is meant to give those measures a prod.

On Moscow’s metro, uniformed inspectors patrol station platforms looking for passengers not wearing masks — and rebuking the many who have them but are wearing them below their noses.

The TASS news agency reports that in the past two weeks alone as cases spiked,  more than 10,000 passengers were fined and 100 “raids” were conducted on a single day,  an indication of the stepped up enforcement.

More than 60 food stores in Moscow have already been shut down, at least temporarily. A hookah bar was fined for having dirty tables and countertops, and not enough masks available for employees.

“The main thing is people’s health, the second is the economy — of course we don’t want to close anything,” said Sergei Sobyanin, Moscow’s mayor for the past decade. 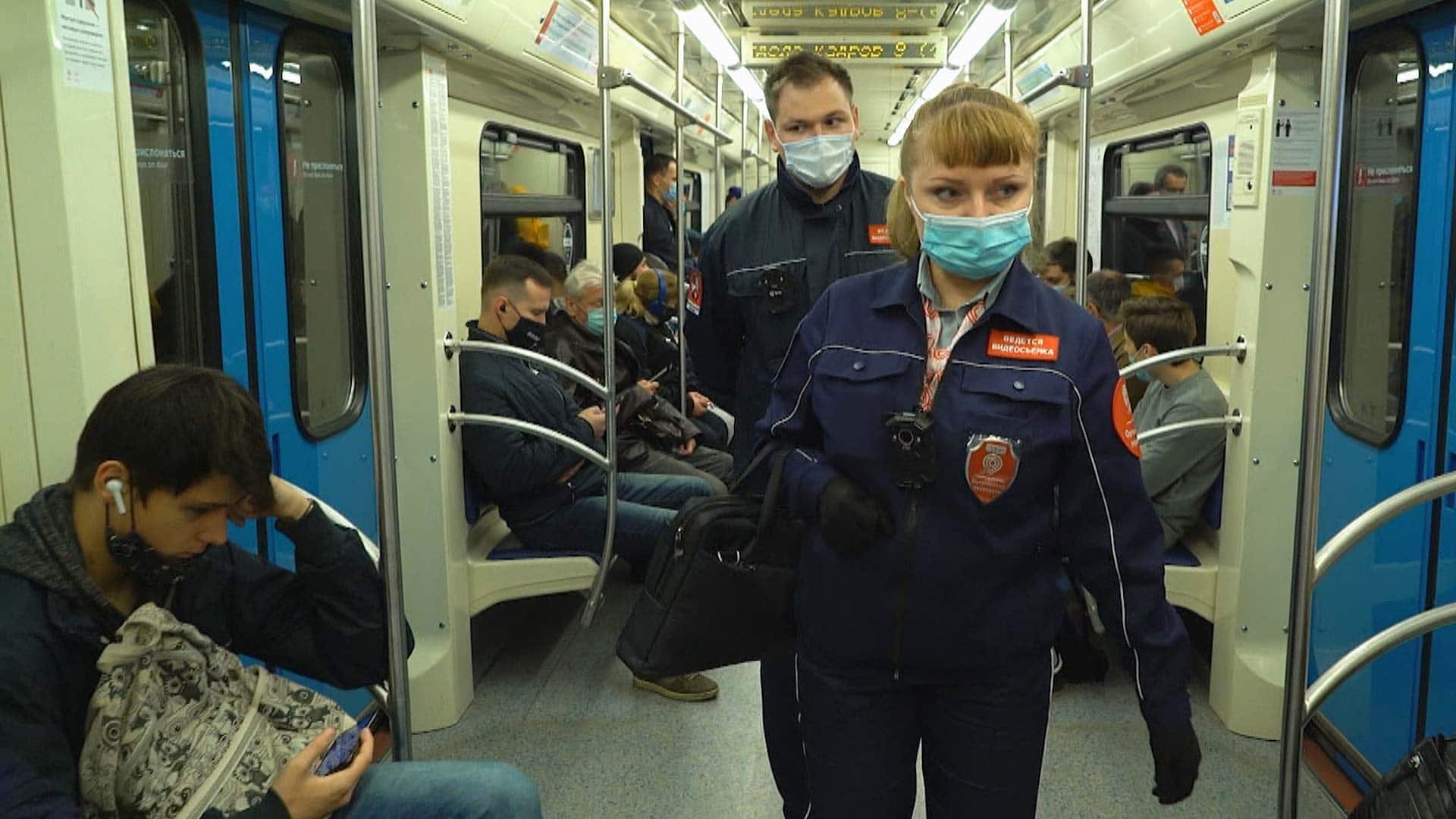 An army of COVID inspectors patrol subways, businesses, looking for violations and handing out fines. 1:02

Russia has soared past its peak daily infection rates from the spring and is now in uncharted territory. On Tuesday, new daily infections topped 13,000 for the third day in a row. The national health agency also reported 244 deaths — nearly twice as many as the 125 the day before.

Moscow reported 4,600 of those new cases alone, and last week Sobyanin said hospitalizations were running at about 1,000 patients a day.

In the spring, Moscow endured one of the strictest lockdowns anywhere in the world, with people required to download an identifying barcode onto their smartphones and get it scanned just to go outside.

The economic consequences were severe. The national economy crashed by 8.5 per cent. It was not as bad as some had feared, but there is little appetite to go through that again, and so Sobyanin has brought in a series of less restrictive measures that may be easier for Russians to adhere to.

Schools have been temporarily closed and businesses ordered to send 30 per cent of their employees home. Anyone over the age of 65 is also restricted to the place they live.

“It is clear that people are tired of COVID, but we need to hold out for a few more months before mass vaccination,” said Sobanyin, echoing President Vladimir Putin’s reassurances that Russia’s much-hyped Sputnik V vaccine will soon be a game-changer.

The vaccine is being given to Russian health care workers and other volunteers even as its maker, the Gamaleya Research Institute, continues to conduct Stage 2 and 3 clinical trials to determine whether it’s safe and effective.

3 days for an ambulance

Still, the more pressing concern is the state of the vast nation’s health care system, which doctors, nurses and other health care workers complain is woefully underfunded.

The union Deystviya, or Action, which represents paramedics and ambulance drivers, held a news conference Monday to press Russia’s government for more funding, citing long hold times to reach an emergency department and even a shortage of ambulances.

“There are more sick people, and now it’s difficult to even get a call through to emergency — you could be waiting 45 minutes for the operator to answer,” said ambulance driver Alexander Mitrofanov, who is from the city of Samara, near the Kazakhstan border.

His complaints appeared to be validated by the regional governor, who this week ordered government workers to give up their complimentary vehicles so they could be pressed into service as ambulances.

Even closer to Moscow, such as in the city of Vladimir two hours to the north, the problems are equally severe, say the workers.

“We don’t even have oxygen in all the vehicles,” said paramedic Ekaterina Yasheva. “I’m supposed to administer this oxygen to the patient, but often there is just no oxygen at all in the ambulances.”

The rapid rise of COVID-19 cases has hit Russia hard and its underfunded health-care system is showing the strain even though authorities had made a big deal about fighting the virus with high-tech surveillance measures and heavy enforcement. 2:11

‘Not the best equipment’

Among those who’ve been infected with the virus is Kremlin-friendly TV pundit Sergey Markov, who has been a frequent commentator on CBC News.

CBC News reached him in Moscow’s Slifasovsky hospital, where he had been recovering from COVID-19 since becoming symptomatic while at a political conference in Crimea earlier this month.

“I think the Russian health system is not financed enough, and this is one of the major criticisms directed at Vladimir Putin,” said Markov, who was discharged Tuesday evening after battling back a high fever.

He says doctors told him they needed his bed for more seriously ill patients.

“We have the best doctors but not the best equipment.”

Putin himself has rarely been seen in public since March. State media shows him conducting the nation’s business mostly via video conference. Independent media reports have suggested anyone who meets with Russia’s president in person must first spend two full weeks in a special quarantine hotel.

In resisting a nationally mandated lockdown or the provision of paid leave days to keep people at home, as he did in the spring, Russia’s president has essentially left it to local authorities to figure out how to handle the surge of cases.

In Moscow, the answer at least in part has been tickets, fines and a lot of cajoling not to get too close.