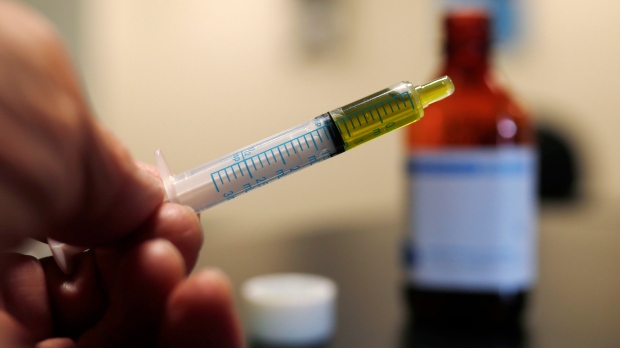 TORONTO — A case study of a U.K. woman whose lung tumour shrunk without the aid of conventional treatments while she was taking a daily dose of cannabidiol (CBD) oil has scientists suggesting it may be worth studying the use of CBD oil further.

The report, published in BMJ Case Reports in October, describes how the woman’s tumour shrunk from 41 mm to 10 mm in roughly two and a half years.

Cannabinoids are similar to endocannabinoids, which are manufactured by the human body to help in various processes, such as nerve function, energy metabolism, pain and inflammation and immune function, among others.

While cannabinoids have been studied as a primary cancer treatment before, the results have been inconclusive and inconsistent, making it difficult to pinpoint if it actually had any impact.

In this case report, a woman in her 80s was diagnosed with “non-small cell” lung cancer in June 2018 after months of a suspicious cough. She was a life-long smoker, smoking roughly 68 packs a year, and had a background of “mild chronic obstructive pulmonary disease,” the report stated.

When she was first diagnosed, even though she was a candidate for treatments aimed at curing her cancer, she declined surgery, radiotherapy and other treatments she was offered.

The report offered the patients’ perspective, in which she explained that she declined treatment because she had watched her late husband go through the struggle of radiotherapy.

So doctors decided to simply perform regular CT scans to check up on the patient every three to six months.

During these scans over the next couple years, doctors observed that her lung cancer was shrinking. By February 2021, it had reduced by approximately 76 per cent in diameter, which averaged to a 2.4 per cent reduction per month since diagnosis.

In 2019, the shrinking of the tumour piqued doctors’ interests, and the patient was brought in to discuss her results.

In this meeting, she revealed that she had been taking CBD oil “as an alternative self-treatment for her lung cancer” since August 2018, which she had sourced from outside of the U.K. She was taking 0.5 ml of the CBD oil, two-three times per day.

She had noticed a reduced appetite since taking the CBD oil, but apart from that, she had no other changes to her prescribed medications, diet or lifestyle — she was even still smoking one pack of cigarettes a week still, despite being advised to quit.

The endocannabinoid system in humans, which was only identified in the 1990s, is still a mystery in many ways. Although we know it helps to regulate physiological and cognitive processes and manufactured endocannabinoids that “act as neuromodulators,” just how this system can be tapped into with medication and drugs is a growing research avenue.

Cannabis and cannabinoids in general do have proven therapeutic uses, such as assisting with chronic pain, anxiety and sleep disorders, but research into whether cannabinoids could be used as a direct cancer treatment has not yet come up with a clear answer.

If the CBD oil did play a part in the woman’s tumour shrinking, doctors aren’t sure how the active ingredients worked together to achieve this. Previous research into CBD and THC as treatments for cancer have had contradictory results at times, with THC having been shown in some studies to decrease tumour growth, but has been shown to increase cancer cells in other studies.

Doctors also acknowledged that they were unable to confirm the full list of ingredients in the CBD oil this particular patient took.

The patient certainly believe the CBD oil made the difference, and was quoted in the report as being “over the moon” and intending to continue taking the CBD oil “indefinitely.”

But one case report does not prove the treatment works — yet.

“Although there appears to be a relationship between the intake of ‘CBD oil’ and the observed tumour regression, we are unable to conclusively confirm that the tumour regression is due to the patient taking ‘CBD oil’,” the report stated.

“More research is needed to identify the actual mechanism of action, administration pathways, safe dosages, its effects on different types of cancer and any potential adverse side effects when using cannabinoids.”