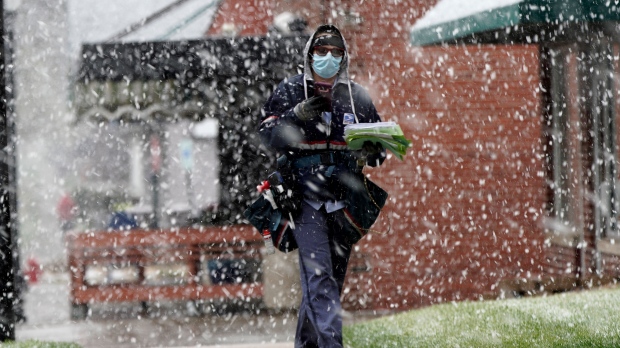 TORONTO — Countries with rising COVID-19 numbers – Canada among them – must get the curve under control before hospitals are inundated with huge numbers of people battling either the novel coronavirus or winter’s seasonal sicknesses, says a doctor with the World Health Organization.

“Well, certainly the winter months are very important because that’s when other illnesses appear,” said Dr. Margaret Harris, who spoke to CTV’s Your Morning from Geneva on Monday.

“That’s the time when respiratory illnesses really love to circulate in our communities.”

The world is rapidly closing in on a million deaths from COVID-19 and has surpassed 33 million cases, according to WHO numbers updated Monday.

“So we’ve already got this terrible virus, and as you said, we are reaching an awful milestone.”

Case numbers are rising in Canada and in many countries around the world. On Monday, Canada recorded 1,450 new cases in just Ontario and Quebec. Ontario’s 700 new cases is the highest single-day COVID-19 increase ever recorded in the province.

Canada has now recorded 154,575 cases and 9,270 deaths, according to figures compiled by CTV News. Prime Minister Justin Trudeau said last week that a second wave is already underway in most of Canada that could make the fall “much worse” than the spring.

The WHO has called surging coronavirus cases in Europe a “very serious situation.”

As COVID-19 numbers climb, it will place a heavy burden on hospitals that will also be dealing with seasonal illnesses. Cold weather can even bring an uptick in heart attacks because cold weather can constrict the flow of blood to the heart.

“Your hospitals won’t be able to deal with all the things they have to do,” said Harris. “So that’s why it’s so critical to really suppress transmission of this virus right now.”

It’s just as important to seek out knowledge from reputable sources, says Harris, including the WHO, national health departments, and universities.

“One of the biggest problems right now is that misinformation is flying around the world a lot more quickly than the right information,” she said.

“We all hear all sorts of stuff from friends and neighbours and social media and everything else, but go check it first, and before you pass anything check whether it’s true.”

Harris says there is reason to be optimistic on the vaccine front.

The WHO is tracking more than 170 COVID-19 vaccine candidates that are being developed and tested around the world.

“Never have there been so many vaccines, so many scientists, so many groups working so hard to create such an important tool for humanity.”

Nine vaccines are in Phase 3 clinical trials, says Harris, meaning they are being tested to see if they work “out in the wild” to protect against transmission of the virus.

To be really effective, the trial needs to be “double blinded,” where neither the researchers nor the trial participants know whether or not they got the vaccine.

Harris says it’s expected that results from the first of the Phase 3 trials will begin to be known at the end of this year or early next year.

“It’s still a while yet, but it’s still very good news.”