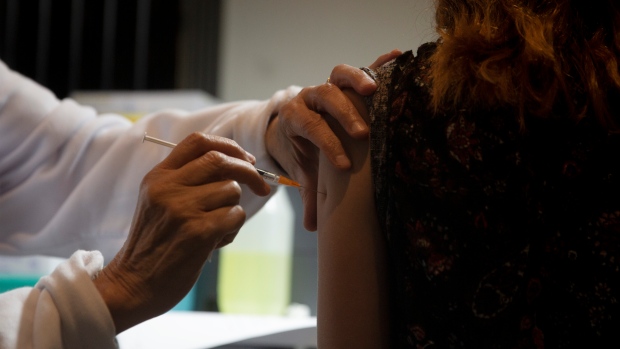 TORONTO — As one of the regions with a strong vaccination campaign early on, Israel’s COVID-19 wards have taught doctors around the world important lessons about vaccines — but the country’s latest decision to give third doses has been a controversial one.

And the key message is that the unvaccinated are still paying the biggest price when they contract COVID-19.

“Some patients who are not vaccinated, they chose not to,” Hava Gerdner, a front-line nurse in Israel, told CTV News. “And they are admitted here and they’re all on oxygen.”

She said that when she sees younger patients, she knows that if “they were vaccinated, they may not have been here, because they might have had a much, much lighter case.”

She added that a lot of beds are being taken in the hospital by younger patients who otherwise would not have been hospitalized if they were vaccinated and caught COVID-19.

But the threat of the Delta variant and rising case numbers in Israel have authorities taking new measures.

Those with two shots are still getting sick with what are called breakthrough infections.

Half those in Hadassa Hospital in Jerusalem are double vaccinated, a statistic that is less surprising when you take into account that more than 60 per cent of the population are fully vaccinated.

Front-line staff report that vaccinated patients who end up in hospital seem to fare better.

“It’s less intense, I think, and the patients are less sick,” Gerdner said. “There are definitely very sick people, but I think the amounts are different. So definitely we can feel the difference in the vaccinated patients.”

“The vaccinated patients I’ve treated usually left the ICU in about three days. The unvaccinated patients took a week or two until they stabilized,” Yael Haviv-Yadid, head of the critical care ward at Sheba Medical Centre near Tel Aviv, told Reuters.

Still, the group filling the ICUs are largely seniors, and it’s seniors with chronic illnesses — because even after two shots, lab tests show few protective antibodies in this group.

Dr. Dror Mevorach is in charge of the COVID-19 unit in this hospital, and said that things have gotten much better for them in the past six months.

“Currently we have about 40 patients,” he said. “And I can tell you that in January, we had 200 patients. So it’s much better for us,”

Around 30 patients are battling severe conditions.

“What is interesting is that those [in the ICU] that were vaccinated [are] quite old people with a lot of backgrounds and diseases, and actually I think that a large proportion of them did not really realize the vaccination and did not develop an antibody response to the vaccination because of the background, diseases and age,” he said.

Lab tests in Israel show that elderly patients with chronic illnesses have few, if any, antibodies from their vaccinations.

“Many of the people who arrive at hospital have either low [amount] of antibodies or no antibodies at all,” Mevorach said. “So, it’s clear that they did not mount the immune response to the vaccination, or the effect decline after five, six months.”

This is part of the reason why Israel is launching a new program, offering a third booster shot to young and old to boost immune response.

Israel initially announced they’d be giving third shots to those over the age of 60, but expanded the age eligibility in the following weeks, expanding it to anyone over the age of 30 earlier this week.

The World Health Organization said last week that they believe the current evidence does not support booster shots for the general population.

Mevorach said he believes that third doses of the vaccine are necessary for especially those who are elderly and those who are high-risk.

“Now we think that we should give it actually to all the population,” he said.

Israel’s case is based on the belief that the Delta variant infection usually comes with a high viral load, meaning more antibodies are needed, which could come through a third shot.

“We know the viral load of the Delta variant is about 1000 times more than the Alpha value. And that’s why you need more antibodies to fight the virus,” Mevorach said.

This vaccination plan is now part of a global debate over whether highly vaccinated countries should offer third doses to their general population, an idea that has received sharp criticism from the international community considering that many low-income countries are fighting for first doses still.

And there’s no evidence that third doses are necessary for everyone, many scientists say.

“When you’re giving healthy individuals a booster, it really should be driven by clinical data,” Dr. Amish Adalja, with the Johns Hopkins Center for Health Security, told CTV News.

“And that clinical data should really point to erosion in the ability of the vaccine to [prevent] serious disease, hospitalization and death, not just antibody levels, not just breakthrough infection levels, but serious illness — because that’s what the vaccines were designed to do.”

He pointed out that the data makes it clear that vaccines are very effective at limiting severe illness and death. Antibody levels in those who were the most at risk from the virus already — the elderly and immunocompromised — may not provide the strongest support for policy decisions that seek to bring booster shots to the entire population.

“I think when you’re looking at the trajectory of the pandemic, putting third doses into heavily vaccinated people is probably of marginal value when the real issue needs to be getting first doses into people all around the world, because that’s what’s really going to move us past this pandemic,” he said.

Booster shots may make sense for vulnerable groups that are at a greater risk, such as the elderly and those who are immunosuppressed.

“However for the general healthy population, if they were to contract a breakthrough infection, it’s likely to be mild, similar to the common cold,” he said. “And I don’t know that there’s much utility in preventing vaccinated people from getting very, very mild illnesses when the main trajectory of this pandemic is being driven by people who aren’t lacking third doses, but are lacking first and second doses.”

European countries are only offering booster shots to seniors or those with underlying disease right now.

But the U.S. is following Israel’s lead, and have announced a plan to give the entire population booster shots starting in September as long as it’s been eight months since their second shot.

Scientists in Canada don’t think third boosters for the healthy are needed here yet.

“We do have proof that immunity against mild disease is waning,” Dr. Allison McGeer, an infectious disease expert with the Dalla Lana School of Public Health, told CTV News. “Our protection against severe disease in all of the studies so far is holding up really well.”

While third doses might become a reality for the general population at some point down the line, many experts feel that highly vaccinated countries should not be worrying about it now, when so many regions have low vaccination rates.

“Millions and millions of people around the world, including health-care workers, … [are] not inoculated,” she said. “Those are places where there’s much more infection. Much more unvaccinated. They pose a much greater risk.”

But Israel is clearly taking no chances, and their decision to offer third doses to their population is an experiment that will — one way or another — inform the rest of the world’s decision moving forward.

And Gerdner, working on the front lines, is warning that no one should underestimate the virus.

“Hope for the best, but expect the worst,” she said. “Definitely, definitely continue vaccinating. I was here for the first, second and third round [of COVID-19]. And there is the fourth round, but it is different.”