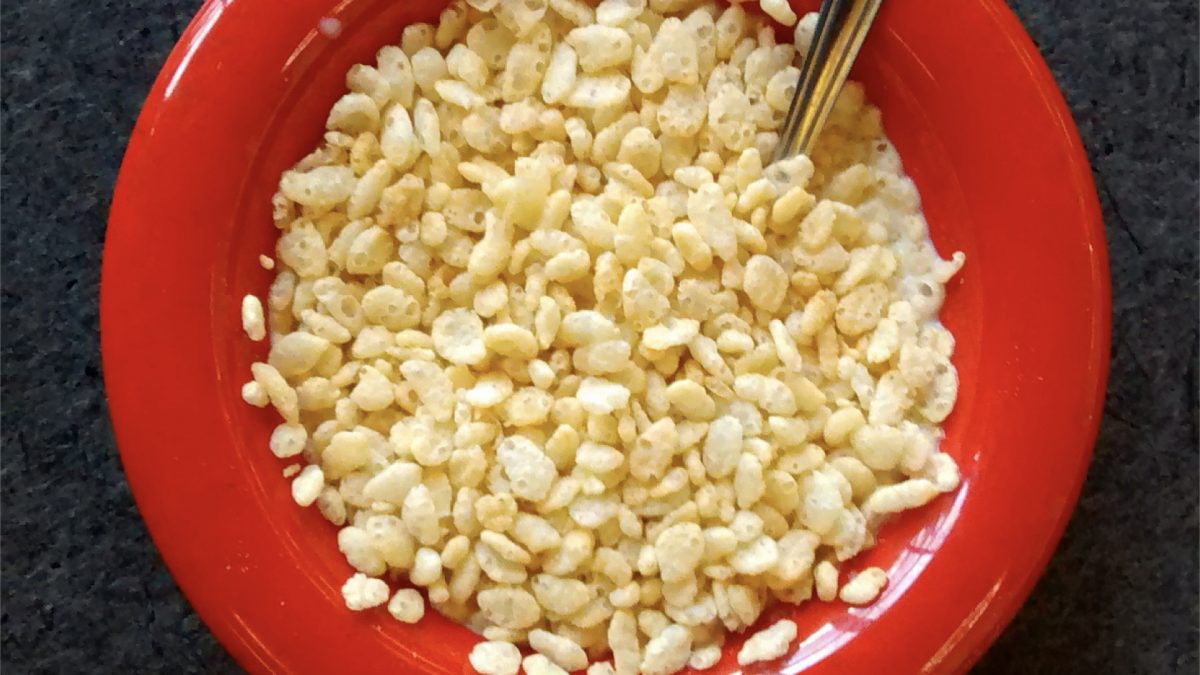 I recommend people switch away from using rice milk

For kids and teens, the amount of arsenic flowing through their bodies was found to be about 15 percent higher for each quarter cup of rice consumed per day, and a similar link was found in adults. A study of pregnant women found that consuming about a half cup of cooked rice per day could raise urine arsenic levels as much as drinking a liter of arsenic-contaminated water at the current upper federal safety limit. These findings “suggest that many people in the United States may be exposed to potentially harmful levels of arsenic through rice consumption.” which I explore in my video Arsenic in Rice Milk, Rice Krispies, and Brown Rice Syrup.

Do you know where Americans get most of their rice arsenic? From Rice Krispies, though brown rice crisps cereal may have twice as much, as I discuss in my video Arsenic in Rice Milk, Rice Krispies, and Brown Rice Syrup.

What about rice milk? A consensus statement of both the European and North American societies for pediatric nutrition recommends the “avoidance of rice drinks for infants and young children,” and, generally, toxic “inorganic arsenic intake in infancy and childhood should be as low as possible.”

To this end, the United Kingdom has banned the consumption of rice milk for young children, a notion with which Consumer Reports concurred, recommending no servings a week of rice milk for children and no more than half a cup a day for adults, as you can see at 1:56 in my video.

The arsenic in various brands of rice milk ranges wildly—in fact, there’s a 15-fold difference between the highest and lowest contamination, suggesting manufacturers could make low arsenic rice milk if they wanted. As you can see at 2:16 in my video, Consumer Reports found rice drinks from Pacific and Rice Dream brands were right about average, though, for Rice Dream, it appears the vanilla or chocolate flavors may be lower. It doesn’t seem we have anything to worry about with rice vinegar, but rice pasta and rice cakes end up similar to pure rice in terms of arsenic levels, which makes sense because that’s pretty much what they are—pure rice. However, pasta is boiled, so we’d expect the levels to be cut 40 to 60 percent, like when you boil and drain rice.

If you just couldn’t live without rice milk for some reason, you could make your own using lower arsenic rice, like brown basmati from India, Pakistan, or California, but then your homemade rice milk might have even less nutrition, as most of the commercial brands are at least fortified. Better options might be soy, oat, hemp, or almond milk, though you don’t want kids to be drinking too much almond milk. There have been a few case reports of little kids drinking four cups a day and running into kidney stone problems due to its relatively high oxalate content, which averages about five times more than soy milk. More on oxalates in my video series starting with Oxalates in Spinach and Kidney Stones: Should We Be Concerned?

I have about 40 videos that touch on soy milk, discussing such topics as how it may normalize development in girls and reduce breast cancer risk, as well reduce prostate cancer risk in men. Some of the latest science on soy milk includes an association with better knee x-rays, suggesting protection from osteoarthritis, and an interventional study suggesting improved gut health by boosting the growth of good bacteria. However, drinking 3 quarts a day, which is 10 to 12 daily cups, for a year may inflame your liver, but two cups a day can have an extraordinary effect on your cholesterol, causing a whopping 25 percent drop in bad cholesterol after just 21 days.

An ounce and a half of almonds, about a handful, each day, can drop LDL cholesterol 13 percent in six weeks and reduce abdominal fat, though a cup of almond milk only contains about ten almonds, which is less than a third of what was used in the study. So, it’s not clear if almond milk helps much, but there was a study on oat milk compared to rice milk. As you can see at 4:37 in my video, five weeks of oat milk lowered bad cholesterol, whereas rice milk didn’t, and even increased triglycerides and may bump blood pressure a bit. However, the oat milk only dropped LDL about 5 percent and that was with three cups a day. As plant-based alternatives go, it appears soy milk wins the day.

So, why drink rice milk at all when there are such better options? There really isn’t much nutrition in rice milk. In fact, there are case reports of severe malnutrition in toddlers whose diets were centered around rice milk due to multiple food allergies. Infants and toddlers have increased protein requirements compared to adults, so if the bulk of a child’s diet is rice milk, coconut milk, potato milk, or almond milk, they may not get enough, as you can see at 5:23 in my video. In fact, cases of kwashiorkor—that bloated-belly protein- and calorie-deficient state of malnutrition—due to rice milk have been reported in Ethiopia…and Atlanta, Georgia, because literally 99 percent of the child’s diet was rice milk. So, these malnutrition cases were not because they drank rice milk, but rather because they drank rice milk nearly exclusively. I just use these examples to illustrate the relative lack of nutrition in rice milk. If you’re going to choose a milk alternative, you might as well go for one that has less arsenic—and more nutrition.

I have released several videos on soy milk, but only one on almond milk video so far: Prostate Cancer and Organic Milk vs. Almond Milk. I plan on producing many more on choosing between various milk options, so stay tuned.

If you’ve missed any of the useful material on dietary arsenic I’ve also shared, please see:

The final four videos in this series take all of this information and try to distill it into practical recommendations: