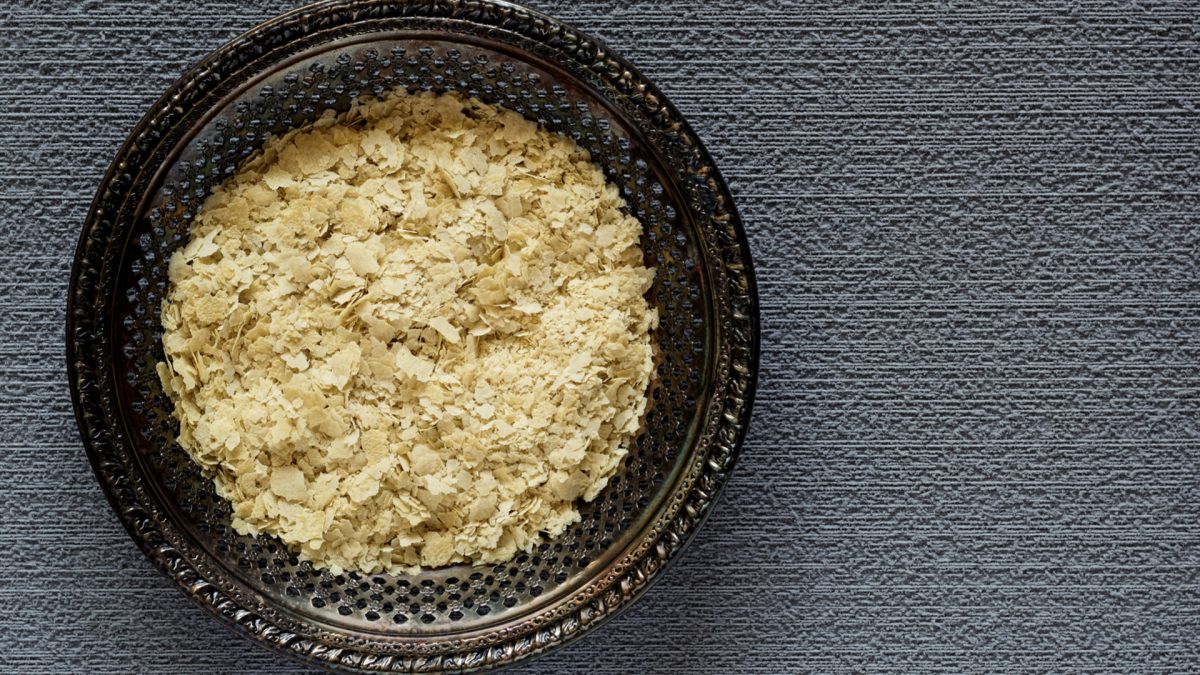 The amount of beta-glucan fiber in just a dusting of nutritional yeast a day is put to the test in a randomized, double-blind, placebo-controlled trial for the prevention of common childhood illnesses.

In 1989, the late Charles Janeway gave a presentation that was to revolutionize our understanding of the immune system. He proposed that we must have some ancient innate first line of defense. We had known about vaccinations for centuries and how our bodies can learn from past infections, but he figured that was not enough: Our body must have evolved some way to recognize foreign invaders the first time they invade. He proposed that the way our immune cells discriminate between self and “nonself”—that is, our own cells versus invading microbes—may arise from pattern recognition receptors; we’re born with the ability to “recognize patterns of microbial structure.” For example, there’s a unique component of fungal cell walls called beta-glucan (β-glucan) that naturally stimulates our immune system. Our own cells don’t produce it, but fungal pathogens such as Candida do. Candida is a type of yeast that can cause serious blood infections, so it’s good if our immune system recognizes it right off the bat. Of course, you could stimulate the immune system by injecting Candida into your veins, but then you also might die. Luckily for us, non-disease-causing yeasts such as Saccharomyces cerevisiae, which include baker’s yeast, brewer’s yeast, and nutritional yeast, have that same molecular signature as beta-glucan. The drug industry is capitalizing on this “powerful immunostimulatory response” to develop new anti-infection, anticancer therapies, but does it have to be injected into the vein? What happens if you just eat some nutritional yeast? I discuss this in my video Best Food to Prevent Common Childhood Infections.

Our digestive tract is our largest point of contact with the outside world, with more surface area exposed than our lungs and skin put together, so it is not surprising that most of our immune cells are concentrated along the intestinal wall. They don’t just stay there, though. Once they’re tipped off to what’s happening in the gut, they can go defend other parts of the body. That’s why you can give an oral cholera vaccine, for example, and end up with cholera-fighting immune cells in your salivary glands, pumping antibodies out into your saliva to protect against infection.

What if we sprinkled some nutritional yeast on our kids’ popcorn for a snack? Might that help marshal defenses throughout their bodies? Adults tend to get just a few colds a year, but the average schoolchild can come down with a cold every other month—and what can we really do about it? Modern medicine has little to offer for run-of-the-mill common colds. Nevertheless, doctors still commonly prescribe antibiotics, which can do more harm than good. “Clearly, there is a need for effective, safe, and inexpensive treatment…[and] β-glucan can be just the right solution.” You don’t know, of course, until you put it to the test.

So, researchers performed a randomized, double-blind, placebo-controlled trial of about a half teaspoon of nutritional yeast worth of beta-glucan in children who suffered from repeated respiratory infections. As you can see at 3:17 in my video, after a month, they found a significant increase in salivary lysozyme levels compared with controls. (Lysozyme is an important protective immune component of our eyes, nose, and mouth.) However, a larger follow-up study reported the opposite findings, an apparent drop in salivary lysozyme levels. And, although the researchers claimed this was “accompanied by pronounced improvements in the general physical health of tested individuals,” no such data were provided. The only reason we cared about the lysozyme levels, though, was because we were hoping it would result in fewer infections, but there had never been any such studies…until now.

A randomized, double-blind, placebo-controlled trial was performed to see whether the beta-glucan in just a dusting of nutritional yeast a day would reduce the number of episodes of common childhood illnesses. “During the 12-week course of the study 85% of children in the placebo group experienced one or more episodes of infectious illness.” If you go to 4:19 in my video, I show this graphically: Eighty-five percent got ill in the sugar pill group, but taking just an 8th of a teaspoon of nutritional yeast worth of beta-glucans or even just a 16th of a teaspoon’s worth appeared to cut illness rates in half. And those on the yeast who did come down with a cold only suffered for about three days, compared with closer to nine days in the placebo group.

The researchers concluded that by giving kids these yeast beta-glucans, we could “decrease the incidence and severity of infectious illness during the cold/flu season, alleviating some of the burden on parents of caring for sick children,” too.

Nutritional yeast has also been found to be beneficial for marathon runners—see Preserving Immune Function in Athletes with Nutritional Yeast—and also for Stress-Induced Immune Suppression. What about the Benefits of Nutritional Yeast for Cancer? Chlorella and wakame may also help boost immunity, as you’ll learn in my videos Preserving Athlete Immunity with Chlorella and How to Boost Your Immune System with Wakame Seaweed, and so can produce, which I discuss in Using the Produce Aisle to Boost Immune Function.

Some should stay away from nutritional yeast, though: